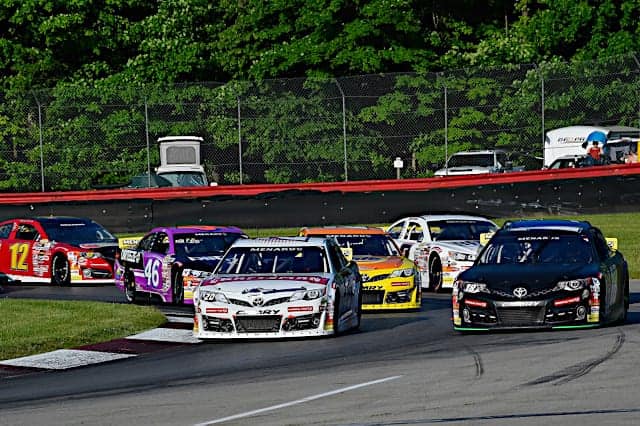 For the first time this year, ARCA Menards Series drivers will make both left- and right-hand turns when they visit Mid-Ohio Sports Car Course for the second time in series history.

Six drivers are using the ARCA Dawn 150 in preparation for the NASCAR Camping World Truck Series race, also at Mid-Ohio, the following day.

Chief among those drivers is John Hunter Nemechek, who is making his ARCA debut in the No. 55 Venturini Motorsports Toyota.

Nemechek is one of a few drivers in the field with either a NASCAR or ARCA-sanctioned road course victory on his resume. Nemechek of course won the 2016 Truck Series race at Canadian Tire Motorsport Park with a memorable finish.

Nemechek will have Jesse Love, Toni Breidinger and Parker Chase as his teammates.

Chase has a plethora of road course racing experience. Love won the first ARCA Menards Series West race at Utah Motorsports Campus in 2020. Breidinger, on the other hand, will make her first ARCA road course start at Mid-Ohio.

“I mean the tracks are like pretty much identical,” Breidinger said in a General Tire YouTube video about comparing iRacing to actually racing on the track. “They’re like if there’s a bump in the track, you’re going to feel it in the simulator, so it’s definitely really cool. It’s a great resource, especially when I’m going to all these new tracks this year. I’m definitely going to be relying on that.”

Gray won the 2021 ARCA West race at Portland International Raceway, though this trip to Mid-Ohio will be his first time at this 2.258-mile road course.

Wright finished one lap down in eighth place at the ARCA race at Mid-Ohio last year, and he is back piloting the No. 42 Cook Racing Technologies Chevrolet.

Wright, Howard, Perkins and Wood all must win to make the Truck Series playoffs.

For Howard, Perkins, and Wood, the ARCA hour-long joint practice/qualifying session and Dawn 150 will give them more knowledge about this 13-turn road course.

All three of those drivers also will drive for Bill McAnally Racing. The ARCA West powerhouse team is seeking its first main ARCA Series victory.

GMS Racing will have its Truck Series driver, Wood, and ARCA driver Daniel Dye in the field.

“I’m looking forward to getting the opportunity to race at a new venue in Mid-Ohio this weekend,” Wood said in a team release. “Road courses have been some of my favorite tracks to drive on, and earlier in the year, I was able to test a Trans-Am TA2 car at the facility and really enjoyed it. Running a double duty schedule this weekend is going to be a challenge no doubt, but I believe that having some extra track time will be a huge benefit heading into Saturday. I’m hopeful that we will have a good run and turn our No. 24 team’s luck around.”

Dye will debut a new paint scheme on his No. 43 Chevrolet.

Dye’s first ARCA road course race came in the West race this season at Portland. He won the pole and finished fourth in the rain-shortened race.

“I’m truly excited to get up to Mid-Ohio on Friday and see what that place is all about,” Dye said in a team release. “Portland was so much fun and I feel like we’ll be able to translate some of what we learned there for Friday and when we go to Watkins Glen later this year. It’ll also be great to have the Champion Container colors on our GMS Chevy for the first time this season.”

Only about a quarter of the field (six out of 25) competed in the ARCA race at Mid-Ohio. Those drivers are Stanton Barrett, Tony Cosentino, Arnout Kok, Nick Sanchez, Brad Smith and Wright.

Sanchez is second in the points, one spot ahead of Dye. Sanchez finished sixth in the ARCA race at Mid-Ohio last year. Points leader Rajah Caruth is making his first road course start and is hungry for his first ARCA victory.

“Literally everybody I’m racing against has won already,” Caruth told The Charlotte Observer. “And I’m first in points and I haven’t won yet. Going in the race shop and seeing my teammates’ win banners … it’s just, as a competitor, frustrating. I feel like I’ve got my ducks in a row and I still haven’t won yet.”

Like Breidinger and many novice racers, Caruth uses iRacing to learn about the tracks. So far, out of the top 10 in ARCA points, Caruth has the second-best average finishing position.

The best average finishing position in the ARCA top 10 belongs to Sammy Smith. Smith has been on a tear, winning back-to-back ARCA races en route to vaulting to No. 1 in the Frontstretch ARCA power rankings.

In addition, Smith debuted in the NASCAR Xfinity Series at Road America. He started eighth, earned six stage points and appeared headed for a top 10 run before a blown engine resulted in a 24th-place finish with a DNF.

Smith’s ARCA predecessor in the No. 18 last year, Ty Gibbs, led 35 laps en route to winning the 2021 ARCA race at Mid-Ohio. Can Smith make it back-to-back victories for the No. 18 team at Mid-Ohio?

The green flag for the ARCA race at Mid-Ohio will fly at 5 p.m. ET on Friday, July 5 at 5 p.m. ET with TV coverage provided by FOX Sports 1.