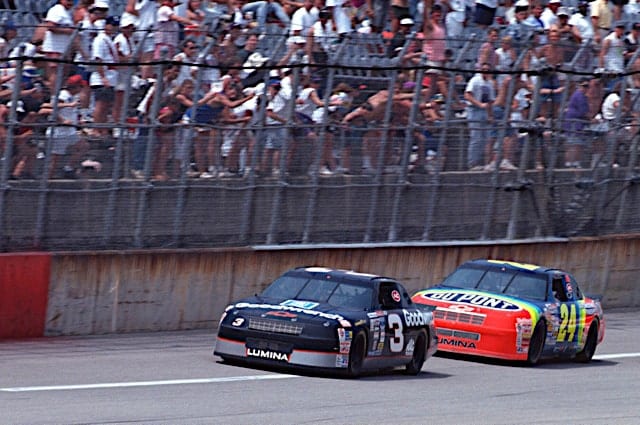 The history of racing (and other sports as well) seems remarkably simple.

So much is black and white. In an age where information is at everyone’s fingertips, it’s all right there in front of us.

Sports are a unique part of our history because they can be broken down into numbers. Statistics and box scores fill the sports pages with neat accounts of what happened on any given day, in any given season, in any given career. In racing, it’s easy, at the very least, to start a debate about who was the best of any given era because, well, the numbers are right in front of us.

A couple, here and there are disputed, but for the most part, it’s all one neat little package, and in many ways, it’s accurate.

We’ve all heard the old line about lies, damned lies, and statistics. And to some degree, stats can be manipulated to fit a rhetoric. It’s easy to say that Richard Petty was a better driver than Jeff Gordon, because Petty has 200 Cup wins to Gordon’s 93.

But what’s not taken into account here is that the two raced in completely different eras in NASCAR. And, save for one race when Petty had probably hung on for too long and Gordon was the rawest of rookies, they didn’t race against each other.

And that’s where the numbers get blurred.

Numbers are absolutely important — at some point, for example, we have to be able to say that a driver was, or was not, among the greats to be enshrined in a Hall of Fame, and statistics are a big deal in that regard.

But what about the things that statistics don’t account for?

There’s no tally for the number of races a driver ran for an underfunded team that simply didn’t have the equipment to post top finishes. There’s no way to quantify the “could have beens,” when a driver was on the way to a top finish when he got taken out by someone else’s mistake or a mechanical failure.

I touched on this in this week’s Big 6, but it’s not a cut and dried subject.

NASCAR’s history is still a fairly young one, young enough that some of the folks who remember the early days are still around who can still tell the stories. Ask some of them who the best drivers were, and some of the answers will surprise you, because they aren’t always the biggest names.

And yes, opinion is subjective, but there’s still plenty of weight in the opinion of someone who’s been in the sport for decades.

But fewer and fewer of those people are around to ask with each passing year. Still, there are plenty of people who have watched enough drivers to notice things. Some of those people are professionals, but others are longtime fans who have attended dozens of races and practices and qualifying sessions.

Of course, everyone’s definition of talent will be slightly different. Some will say that talent on some tracks, like the superspeedways, is hardly talent at all, but that’s not true.

Not every driver is comfortable in the draft, especially in the massive packs of cars those races feature today. Some very good superspeedway racers don’t have the wins to show for it, but they were (and still are) the drivers everyone wanted to work with. Listen to a young driver’s scanner and see who the crew chief tells them to follow — that’s a pretty good indication.

It’s difficult, if not impossible, to really watch drivers on television broadcasts. The angles aren’t right, and the announcers color what we see and hear.

Statistics will always represent accomplishments. They can tell a story, but not in the way that someone who’s seen it all can.

So how, then, to stop so much of the sport from fading into the ether?

It falls to us. Watch drivers at every level, from local hobby stocks to the highest NASCAR levels and pay close attention to what they do. Watch the winners and the backmarkers, and pay attention to the drivers the locals and longtime observers are watching.

Look for what the numbers can’t tell you: the smooth consistency lap after lap, the controlled (or not) aggression, how and when that driver makes his moves. After a while, you see it. You just know.

All we can do to keep parts of the sport from vanishing into the past is to take care of it. Listen to anyone you can who’s been a part of it, watch — really watch — drivers driver racecars, and then tell the next generation of fans what you heard and saw.

Numbers stand for all time, and they’re important. But the rest of it, the “You won’t believe this, but…” moments, they belong only to us, and to time. We won’t always agree on what we see, but we don’t have to. We just have to see it, share it, and listen to what others have to say.

And then it lives forever.

Amy:
Look at baseball. They are able to preserve the relative statistics and leaders. They made a mistake by the * with Roger Maris’ home runs in 1961. People understand the times were different and there will always be arguments.
The major problem I see is the unwillingness of the younger reporters to appreciate the past. The sport did not begin with Dale SR. He was the last of a breed of drivers that date back to the 1950s, Curtis Turner, Fred Lorenzen, Junior Johnson, Ned Jarrett, Richard Petty, Cale Yarborough, and I could go on.
Different era. More races but they worked on their cars and operated on shoestring budgets.
Back to my baseball example, Barry Bonds and Mark McGuire hit more home runs in a season than Maris. The records stand BUT people know about the PEDs. Better lighting, expansion depleting pitching. (Same argument made about Maris, as the league expanded in 1961 as well) and they even accused Maris of “jucing” because he drank coffee and received the effects of caffine. Poorer lighting, train travel, off-season jobs. But the sport can still capture the past and present.
Racing can do that as well. Get Kyle Petty, Dale Jarrett, Mario Andretti, Richard Petty, Dale Inman. Do not try to say “well this changed,” and enjoy the moment.

When Lee Petty won the real race in Toronto in 1958 he earned $575. Richard got $115 after his father punted him into the guard rail. They had to repair the car for the next race in Buffalo the next night. Lee finished 6th and got $195. Richard got $115 for 11th. How much do you think Lee made on the trip? No wonder they had to run 60 races in a year. Jimmie Johnson got $150,926,713 plus five years with undisclosed winnings. Perspective is needed! Petty put money back into the team. Johnson got the money for Mr. H.