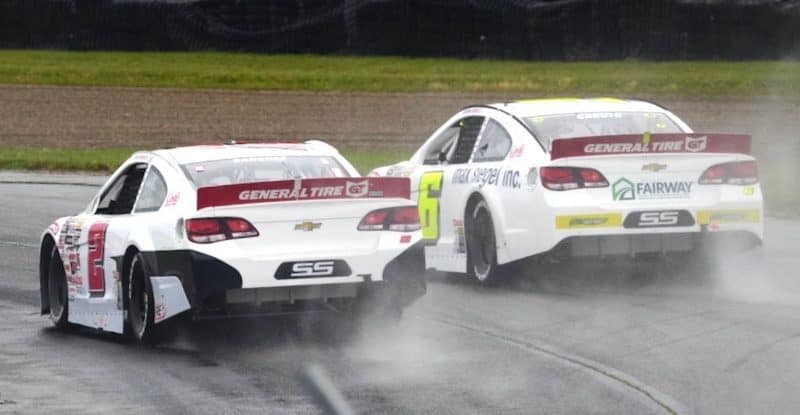 Lexington, OH. – Entering the first ARCA Menards Series road course race of the season at Mid-Ohio Sports Car Course, the top three drivers — Rajah Caruth, Nick Sanchez and Daniel Dye — were all separated by less than 10 points. When the checkered flag flew ending the Dawn 150 on Friday (July 8), all three remained close in the points as all three dealt with challenges throughout the 42-lap race.

In fact, only two of the three finished inside the top 10 and none of them finished on the lead lap. Dye finished one lap down in eighth place, Caruth finished two laps down in ninth and Sanchez finished 11th, also two laps down.

Mother Nature made a difference in the race outcome. The start of the race was delayed due to inclement weather, it slightly rained when the green flag flew and the 2.258-mile road course remained wet for at least half of the race. When the checkered flag flew with Taylor Gray in victory lane, the sun shone brightly.

Sanchez began the struggles for the trio when he suffered some early front-end damage to his No. 2 Chevrolet.

Caruth followed suit with multiple off-track excursions, including spinning his No. 6 Chevrolet.

Right before the competition caution at lap 21, Dye too went off track, albeit driving his No. 43 Chevrolet back on track as the race remained green.

A little visit to the beach for @danieldye43, but he's able to get it going back again just in time for the competition caution. @FS1 | @Mid_Ohio pic.twitter.com/0EAf3vfreH

When the competition caution flew, the field was split on pitting for slick tires or rain tires. Sanchez and Caruth both pitted for slicks whereas Dye stayed with rain tires.

Sanchez rocketed to the front, grabbing the lead. However, another caution followed suit, and Rev Racing made a disastrous mistake.

It pitted both its drivers for fresh tires, breaking an ARCA rule.

REMINDER – teams cannot change slicks to slicks under caution. Can go wets to slicks. The No. 2 and 6 are being penalized 2 laps.

The two-lap penalty ended the duo’s chances for a top five finish or better. Post-race, all three championship contenders were left shaking their heads, eager to move on to the next race at Pocono Raceway.

“I guess a miscommunication,” Sanchez told Frontstretch about the mistaken call to pit his No. 2. “That’s all I can say.”

“Definitely a miscommunication within the team,” he said. “I don’t make the calls. I’m focused on driving it.”

“It was all strategy on tires,” Sanchez said about his drive to the lead. “I think we kinda knew from the beginning. It was just all about pacing ourselves. Our team made a good strategy call and the result’s the result. I want to thank my team Rev Racing, Max Siegel, Chevy for giving me this opportunity. It was a really good race for us. We were there. They knew we were here.

“We brought a good car, we made improvements, and the ending’s the ending. It was a miscommunication; I don’t want to put it all on my team cause there were a million other things that go beyond that rulebook.”

In last year’s ARCA race at Pocono, Sanchez finished fourth. He’s more confident ahead of his second start at the Tricky Triangle, saying, “I think we’ll have a really fast car there.”

Dye entered third in points, but he soldiered on to the best finish of the three.

“It was good that we kept fighting,” he said. “Got stuck a lap down there, I was having trouble in the rain.

“I was having a little bit of trouble, man, not a lot of grip here period. So, I was doing my best and overdid it a couple of times. But came out of here with a couple more points, closer to the championship than we were when we got here so that’s a good thing.”

Like all the bigger tracks on the ARCA circuit, Dye will make his first start at Pocono.

Caruth was more unhappy with his own driving mistakes rather than the costly two-lap penalty.

“I just kept messing up. I couldn’t go wherever the grip was, slipping tires that were dry in the wet, kept screwing up so I can’t do that. We had a very solid car, I think, and I wish it would’ve stayed wet.”

But it wasn’t solely switching from rain tires to sticker tires that piled onto his tough day.

“The hardest was the in-between wet and dry,” Caruth continued. “Not knowing where to go, like I killed my wet tires really bad and I just struggled. I’ve got to do better the next time we go road racing.”

ARCA has one more road course race this season, at Watkins Glen International. It too will be Caruth’s first trip to that road course.

Caruth hasn’t raced at Pocono, either, but he’s more determined than ever to get his first ARCA victory.

“Excuse my language, but I’m going to go win that bitch.”