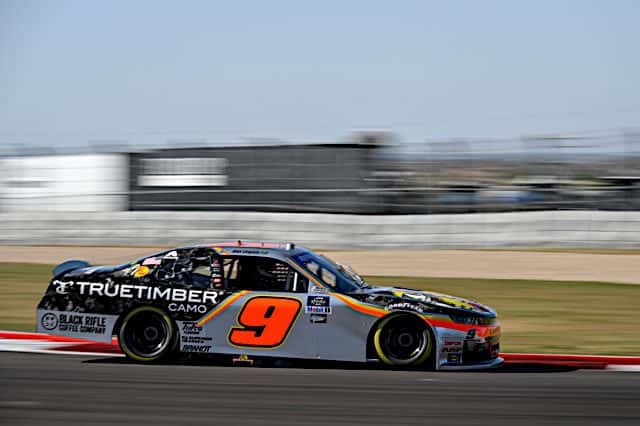 After Tyler Reddick, who will be the next first-time winner in the NASCAR Cup Series? –  Ryan O., New Orleans

Austin Cindric, Chase Briscoe, Ross Chastain, Daniel Suarez, Tyler Reddick: the 2022 Cup Series season has seen five first-time winners, the most in one year since 2011. With only 18 of 36 races in the bag, you would think we’re on track for more.

Except … who’s left in the field that hasn’t won?

Bubba Wallace, Justin Haley and Chris Buescher all own one victory each, as does dark horse top-10 collector Michael McDowell. Part-time road-course ringer AJ Allmendinger has won twice. Even Cole Custer, who hasn’t finished in the top 10 in over a year, won at Kentucky Speedway in 2020.

While I wouldn’t count out any of these guys to shake up the playoff picture with a surprise underdog win, it wouldn’t be the first time for any of them.

Neither of the winless second-generation rookies (Harrison Burton and Todd Gilliland) has shown the speed in their young careers to mix it up at the front, and while both Spire Motorsports and Rick Ware Racing have improved by leaps and bounds, neither Corey LaJoie (Spire No. 7) nor Cody Ware (RWR No. 51) are likely to have race-winning speed any time soon.

That leaves Ty Dillon, doesn’t it?

After an embarrassing debut in the Petty GMS Motorsports No. 42 at the Clash, hitting everything but the pace car and getting thrown out of the main for a restart violation, the younger Dillon brother has kept his Camaro mostly clean ever since. Sitting 26th in points with a best finish of 10th, Dillon hasn’t had many of the headline-stealing performances of his teammate Erik Jones but has quietly readjusted to full-time competition after sitting out 2021.

A Dillon victory would certainly be the biggest upset in a season of upsets, but I’m not ready to put all my eggs in basket No. 42. Could the next first-time winner come from outside the current Cup field?

Well, the last Silly Season domino to fall is Stewart-Haas Racing’s No. 10. Currently driven by three-time winner Aric Almirola, experienced Cup drivers Ryan Preece and John Hunter Nemechek are on the shortlist to replace him. Could it be the mystery driver of SHR’s fourth car that scores a first win next?

While both Nemechek and Preece are experienced and capable wheelmen, I’m not sure either of them could hop right in the No. 10 and win immediately. It’s not controversial to say that SHR has been a step behind ever since Kevin Harvick’s 2020 Martinsville Speedway kamikaze backfired. On track for just one win per season in the two years since, the organization seems a shadow of the superteam that put four cars in the Round of 8 in 2018. As Kurt Busch, Clint Bowyer and now Almirola left, and with Harvick’s retirement seeming inevitable, SHR’s performance downturn has coincided with a 2018 Hendrick-Motorsports-style generational turnover.

So, to the Xfinity Series next. Could the next full-time Cup winner be Joe Gibbs’ hard-charging fist-fighting grandson?

Ty Gibbs has been the story of the Xfinity Series the past two years, and despite Gibbs’ insistence he spend 2023 full time in the lower division, he is positioned as heir apparent to both Kyle Busch’s lead driver role and his black-hat reputation.

Of course, lower-series prospects from Reddick to Chase Elliott have taken a few years to warm up, so no matter how much raw talent the kid has, it’ll probably be a while until he can bring home the hardware. We’d need a few years off from first-time winners until Gibbs can get it done, but of everybody mentioned so far, I’m most confident in predicting Gibbs as a future race winner, if not champion, of the Cup Series.

So I’m calling it a neck-and-neck battle between Gibbs and the field. Can Gibbs find his footing before someone pulls off an upset for the ages? It could come down to restrictor-plate randomness and Mother Nature’s cruel hand.

On paper, a fourth-year Xfinity Series driver for JR Motorsports who’s won multiple races in three straight seasons and is almost a lock for the Championship 4 should be an obvious candidate for any open Cup ride. Noah Gragson hasn’t had any trouble attracting sponsors throughout the lower divisions, and though his pugnacious off-track attitude is polarizing to say the least, it makes him just as many fans as enemies.

Unfortunately for him, he keeps making headlines for all the wrong reasons.

What do you think of NASCAR's decision? Call in at 1-844-627-2276 and join us for #MotorMouths NOW on @PeacockTV. pic.twitter.com/XX5PRZlGoM

NASCAR announced this week that Gragson has been fined 30 driver points and $35,000 for his intentional contact with Alpha Prime Racing’s Sage Karam that caused a 13-car pileup on lap 25 of the Henry 180 at Road America.

If it isn’t clear yet, he isn’t ready for a full-time Cup ride.

Gragson has dipped his toe into the Cup water this year, splitting a part-time schedule between Beard Motorsports and Kaulig Racing, and the results have been less than stellar. Of course, a bit of struggle is to be expected. It takes rookies a while to adapt to Cup racing.

So the question changes: has Gragson learned all that he can from the Xfinity Series?

“Names are made here” marketing aside, the lower divisions of NASCAR aren’t just about young drivers proving themselves. Stock car racing is as much a mental game as anything, and the lower divisions offer young drivers the opportunity to learn how to compete for wins and championships, developing the mindsets and attitudes that will allow them to go on to do it at the highest level in the world.

Frankly, Gragson hasn’t done that. He got roughed up by a road-course ringer for a few corners, then spun himself and 11 others out seeking ill-timed payback. Like his team owner Dale Earnhardt Jr. said, he needs to “remove that from his toolbox.”

As the two hottest hotheads in the series, Gragson will inevitably be compared with Gibbs, and the two have had some remarkably similar run-ins in their brief careers.

Too aggressive too early? Noah Gragson sends Riley Herbst into the wall Saturday at Texas. pic.twitter.com/1LpnvpTNJt

In the early laps of a 2020 race at Texas Motor Speedway, a nudge from Gragson sent Riley Herbst into the outside wall, much like Gibbs’ coming-together with Ryan Sieg at Las Vegas earlier this year. Gragson’s beef with Daniel Hemric last year spilled over onto pit road, much like Gibbs’ dust-up with Sam Mayer at Martinsville Speedway.

Things got a little spicy between Daniel Hemric and Noah Gragson the last time we were in Atlanta.pic.twitter.com/KF8COEkMHp

Neither young driver is ready for a Cup ride just yet, and their team owners would likely agree. But what we saw at Road America was proof of just how far Gragson has to go. While Gragson lost himself $35,000, Gibbs went toe-to-toe with Cup champion Kyle Larson and came out on top.

In his post-race interview with NBC, Gibbs said, “I need to earn respect back, and that’s what I’m doing.”

On the final lap, with Gibbs gaining, Larson threw a last-second block on the entrance to turn three. Gibbs lifted. On the last lap of the race, the most aggressive driver in the garage area got off the gas.

By choosing to pass Larson clean, Gibbs did earn a little of that respect back. Larson later told NBC, “he ran me clean, I was going to run him clean.”

Neither of these guys are ready for Cup, but Gibbs showed the world that he’s starting down that path. Only time will tell if Gragson does the same.

As for comparing Gregson, & Gibbs, I’ll damn Gregson with faint phrase. I expect if he were going to get into a fight, he’d take his helmet off. To do otherwise makes you a punk, & a poser.
That aside, I agree with your conclusions.

So, not much of a Kyle Busch fan then, eh?

Tom B
Reply to  johndawgchapman

I would never take off my helmet. We just want to see punches, brawling and rolling around on the ground, not bloody noses or black eyes.

Who knows. Owners are wealthy because they were good at something else. Ask yourself would Roger Penske put Noah Gragson into a car? What about Rick Hendrick?
Probably not. There is your answer

I think the days where the owner gets full control over who drives for his/her team are long past. There are still some out there, but for the most part, the money talks. In Gragson’s case, as long as Johnny Morris is still with him – he’ll be ok. And while only a fool would claim Ty Gibbs to be lacking talent, the Cup guy in that situation has to pull his punches (if he isn’t a complete fool) and can’t risk wrecking out a regular by going all out for the win. Again, not saying Ty can’t beat him fair and square, just that we know that a veteran cup driver will tread lightly rather than risk it.

Seems to me that Kyle Busch had a similar rep in the lower series, and he seems to have turned out OK. Most of the time.

Totally agree. Just like in Kyle’s case, its (mostly) a media driven thing… The media believes it must always have at least one villain to make the story compelling.