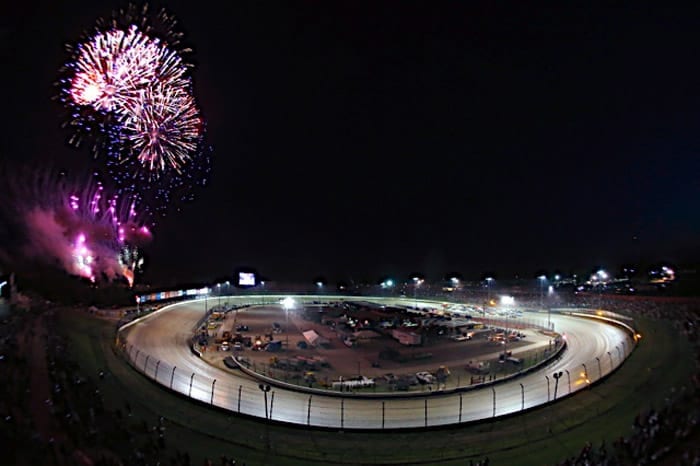 As much to help myself go through notes as meet a deadline, with dirt racing’s summer in full swing, let’s give out some midterm honors based on the season thus far.

. @DIRTVision REPLAY: Eight of the twelve cars collide in a WILD start to Heat Race 2 at @knoxvilleraces! Thankfully all drivers involved are okay! #OutlawTough pic.twitter.com/baskk9tlb1

Runner-up: Kasey Kahne at Volusia. Unfortunately, this wreck kept Kahne out of his sprint car for over a month during his rookie World of Outlaws campaign. Fortunately, Kahne has since recovered and is back on tour full time.

Sheldon Haudenschild is no stranger to the cushion, pounding the high side of any racetrack he contests. And in fact, a year ago, this commitment to the high line cost him a win in a 2021 race of the year finalist, falling short to Dave Blaney on the last lap at Sharon Speedway.

This year, the cushion was his friend. Running on the high side for the final four laps of the High Bank Nationals finale, Haudenschild came out of nowhere to grab the richest sprint car race 2022 has yet contested.

Don’t be fooled into thinking that a $1 million purse automatically wins this race accolades; the race itself was every bit as good as the hype a seven-figure payday brings with it. The track crew at Eldora worked a minor miracle, peeling hundreds of truckloads of clay off their racing surface days before the Million was supposed to run and returning the most prestigious dirt track in America back to form.

By feature time for the Eldora Million, Eldora was slicked over like black ice, and the race was on. The first 83 laps of the feature went straight green-flag, with comers and goers throughout the field as Jonathan Davenport paced things up front.

A few late-race cautions spoiled that 83-lap trip to paradise (there are very few forms of motorsport left anywhere where 83 green-flag laps are even a possibility), but it still set up a dramatic finish that saw defending Lucas Oil Late Model Dirt Series champion Tim McCreadie lose out on a six-figure runner-up payday with a flat tire, giving Chris Madden a shot at Davenport for the race win that came up just short.

The Eldora Million in pure monetary terms is a race that can’t happen every year, but with as good as the on-track product was, here’s hoping we don’t have to wait two decades for the next one.

For one, Davenport joins Donnie Moran as one of only two dirt racers in history to score a million-dollar payday. And let’s be clear, the drive he put on to win the Eldora Million was a masterclass in both tire conservation and car control.

But Davenport’s had a plenty solid season beyond that, even though it was the surprise of the late model world to see it take until the Florida Dirt Nationals in late April to win his first race of 2022. Since then, Davenport has been racking up the wins and money, though, scoring eight feature wins since April. And all of those features paid at least five figures to win.

Make no mistake, Superman is flying high in 2022.

2022 Driver of the Year Candidates – On the Radar Screen

Yes, Erb has benefitted tremendously from both Brandon Sheppard and Madden jumping off the World of Outlaws late model tour in grabbing that series’ points lead. But Erb is not just points racing, having scored eight feature wins in 2022, including two wins during Florida Speedweeks and another $22,000 trophy during Illinois Speedweeks. The One-Man Band will prove a worthy champion should he hold onto the WoO points lead.

It may not be as dominant a performance as it was in 2021, but Hoffman remains as close to a sure thing to win in a modified as any driver in any form of dirt racing. Hoffman won both of the opening DIRTcar features at Volusia in February, the first major races run under the new 2022 UMP modified rules that were largely put in place because of how dominant Hoffman was in 2021. New rulebook, same ol’ results.

Since Volusia, Hoffman has continued to rack up trophies, winning 10 of the 12 modified races he entered on the DIRTcar Summer Nationals tour and sitting on 17 feature wins heading into July. Just like last year, will somebody please give this guy a full-time super late model ride to make modified racing a little more suspenseful?

Opting off the WoO late model tour to chase big-money shows, especially on the XR Super Series tour, has paid off handsomely for Madden in 2022. Scoring more than $200,000 in winnings alone for his feature and points win during the Bristol Dirt Nationals, Madden has grabbed four feature wins worth $50,000 already this season, and had it not been for an early flat tire may have had something for Davenport in the Eldora Million feature.

Nonetheless, a resume that includes the Bristol Dirt Nationals, Colossal 100 and Mountain Moonshine Classic on it is about as stellar as it comes in late model racing.

Marlar has been the rare super late model driver able to keep pace with Davenport and Madden in 2022, having scored six big-money wins during the season. Marlar scored the first major trophy of the season in the $25,000 finale of the Wild West Shootout in New Mexico and since has racked up wins in Kyle Larson’s smash-hit late model show at Volunteer Speedway and the Dairyland Showdown in Wisconsin.

If not for a doldrums stretch between the Wild West Showdown and the spring, Marlar may well be up there with Madden and Davenport on the stats line. Credit goes to Marlar, though, for staying fast this year despite enduring brutal incidents at both Bristol and Wheatland.

No racing today. X-rays instead. Car bicycled in a rut, landed seat first, knocked floor plan through pedals. Hopefully no fractures and will be back after it soon. Maybe @lucasspeedway uses better judgement today, don’t want to see any of my buddies get hurt. pic.twitter.com/VCqnpSFjPm

Fellow Pennsylvania Posse driver Anthony Macri has scored more wins (14) in 410 sprint cars this year and is the first driver I left off my “on the radar” list, but Marks has supplanted the Concrete Kid as the hottest driver in sprint car racing over the course of the early summer.

Marks, who shocked the 410 world by beating the World of Outlaws regulars on their home track of Devil’s Bowl in Texas, has scored wins on every major sprint car track in central Pennsylvania this year, and also picked up a win at Knoxville last month. Expect him to be a prime contender when the Knoxville Nationals are contested in August.