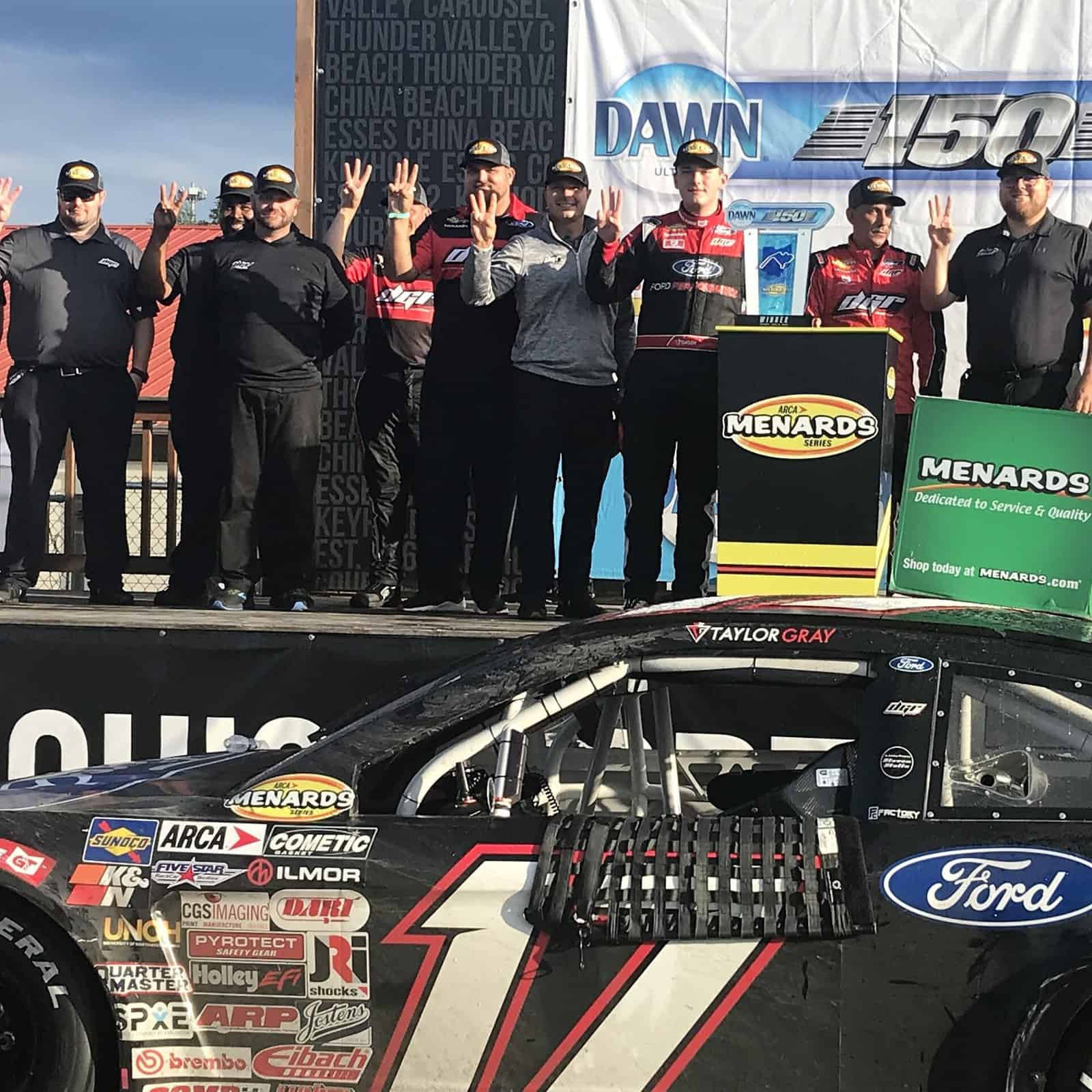 Taylor Gray only led three laps in his No. 17 David Gilliland Racing Ford but led the most important one to win the Dawn 150 at Mid-Ohio Sports Car Course. It was the second win of the 2022 ARCA Menards Series season for the 17-year-old Gray to go along with a victory at Phoenix Raceway back in March.

“I know Chad Johnston and all the boys back in the shop got my back,” Gray said post-race to Fox Sports 1. “It was an awesome call by Chad to come down for tires [on the last pit stop].”

Parker Chase piloted the No. 15 Toyota to second place while Sammy Smith in the No. 18 Toyota came home third.

John Hunter Nemechek was the dominant driver of the day, making his ARCA debut in the No. 55 Venturini Motorsports Toyota. Nemechek led 31 of the 42 laps, but he had to settle for fourth after losing the lead and getting caught up in multiple incidents late in the race.

“It is what it is,” Nemechek said. “I learned a lot. Hopefully, we can take it to tomorrow. I look forward to racing tomorrow in the Truck Series and seeing what we got.”

ARCA officials delayed the green flag by about 30 minutes to clear away standing water and make the 2.258-mile road course at Mid-Ohio more race-able for the 25 drivers in the field.

We’re on a little bit of a hold right now before we kick off the #Dawn150. We’ll let you know when we’re ready to go racing! @ARCA_Racing

The wet conditions created chaos for the drivers, many of whom are inexperienced with road course racing.  The first caution came out halfway through the opening lap when the No. 3 Ford of Casey Carden had a brake issue and Amber Balcean spun in her No. 30 Ford.  The No. 27 of Con Nicolopoulos also dropped out on lap one. Jack Wood confirmed via Twitter that he and the No. 21 team withdrew before the race due to mechanical issues.

Well, I wish our luck was a little better today, but unfortunately a mechanical failure has kept us from starting the @ARCA_Racing race at @Mid_Ohio @BMR_NASCAR
I’m here cheering on @danieldye43 and the rest of the @GMSRacingLLC group! Hopefully they can go for the win. pic.twitter.com/veKVaKs6lp

There were several other early-race incidents that did not bring out the yellow flag. Nick Sanchez drove his No. 2 Chevrolet way off course on lap six, causing damage to his right front fender while getting back on course. One lap later, points leader Caruth went around in his No. 6 Chevrolet. Caruth got off-course again on lap 9 while defending second place from Chase in the No. 15 Chevrolet, followed by another spin on lap 11 trying to fend off Sanchez for third. Meanwhile, Chase had a spin of his own in turn one on lap 12.

While most of the field was in turmoil, Nemechek kept his No. 55 Billy Venturini Racing Toyota on course and sailed away to a comfortable margin over second place, leading all the laps in the first half. The only hiccup for Nemechek in the first half came when he made contact with the lapped No. 35 car of Greg Van Alst, but it caused only minor damage to the No. 55.

The competition caution waved on lap 22, erasing Nemechek’s lead and leaving only seven cars on the lead lap.  The rain subsided around the halfway point, and crew chiefs up and down pit road had a difficult decision about what to do with tires during the halfway break, debating on staying with rain tires or switching to slicks. It wound up being a split decision among the race leaders, with four of the seven lead-lap cars — Nemechek, Smith, Gray, and Love — sticking with the rain tires, while Caruth, Sanchez and Chase switched to slicks. Teams were also busy cleaning grass off the grills and moisture off the windshield to give their drivers a clearer view.

When the race resumed on lap 23, Nemechek had company up front as Smith stuck with him on the restart, and the two Toyotas waged a battle for the top spot. Smith wrested the lead from Nemechek on lap 29, only for Nemechek to take it back on lap 30. The two then made contact on lap 31, pushing Smith off the course. Smith compounded his problems by speeding on pit road during an ensuing stop to get slick tires.

However, the drivers who took slick tires were catching them quickly as the track dried out.  Sanchez led that charge, reeling in and eventually passing Nemechek for the lead on lap 33.

The complexion of the race changed again on lap 35, with Colby Howard stopped on track in his No. 91 Toyota due to a mechanical failure. This afforded another opportunity for pit strategy, with Nemechek switching to slick tires. Wright, Chase and Smith stayed on the racetrack, while during the pit cycle Sanchez and Caruth were both penalized for switching their slick tires for brand-new slicks, a violation under ARCA rules.

“It’s my bad and it’s my screw-up on it,” Sanchez crew chief Matt Bucher said. “I was under the assumption that we could come back in and put on slick tires, but I was obviously wrong in that assumption.”

The field bunched back up for the final restart with four laps to go. Nemechek restarted six with the hopes of rallying back to the front; however, he and Love made contact and spun around in turn 13, putting both Venturini Toyotas out of contention.

The pass for the win came on lap 39 when Gray bumped Wright in turn 12 and then went around the inside in Turn 13. Gray led the rest of the way to the checkered flag, while chaos ensued behind him. Of note, Wright and Sanchez spun together on the last lap while Chase and Nemechek got together later that lap. Nemechek also had a separate incident in the last turn with Smith.

The ARCA Menards Series will return on Friday, July 22 for the General Tire Delivers 200 at Pocono Raceway, with TV coverage on Fox Sports 1 and the Fox Sports app.