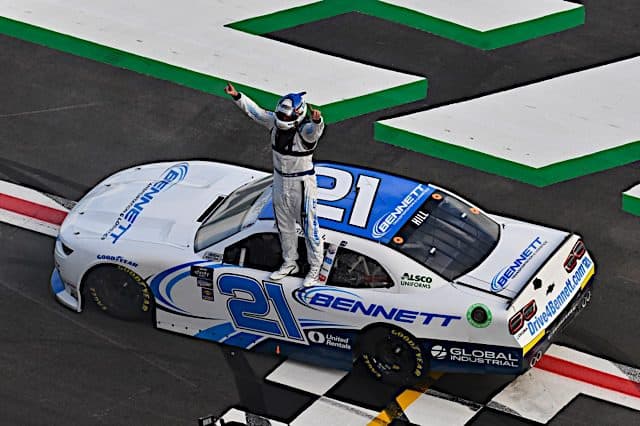 The NASCAR Xfinity Series rolled into Atlanta for the Alsco Uniforms 250 on Saturday (July 9).

In the second race at the recently-reconfigured superspeedway, Austin Hill took home the win in front of his home-state crowd. The team discovered they could not hear Hill on the radio, and the driver was forced to use hand signals to communicate what the car needed but did so well enough to earn his second win of the 2022 season after winning at Daytona International Speedway in the season opener.

“What a car, man,” Hill said. “RCR [Richard Childress Racing] has been working their tails off to bring some very fast Chevrolet Camaros; it was a rocket ship all day. We had to make hand gestures on the side of the car to make adjustments and they did a heck of a job — they made an adjustment and didn’t need another for the rest of the race.”

Hill had been trying to score a win at his home track for a while.

“I’ve been trying to win here a long time,” he said. “Finished second here three times in a row, twice in a truck and in the spring. It’s been owing me one and finally, we got one in Georgia. I can’t wait to party.”

The Georgia kid wins at @amsupdates!

Winston, GA's @_AustinHill gets the W just a few miles from his hometown. #NASCAR pic.twitter.com/NOOdBBIozk

Josh Berry tried to make a run on the last lap, but could not find a way to the front and settled for second.

It wasn’t a pretty day for AJ Allmendinger, who had to come back to pit after he reported a loose wheel and eventually going two laps down in the process. He was able to recover and finish 10th.

Another big name, Ty Gibbs, had trouble with less than 70 laps to go, when Riley Herbst got loose, drifted up the track, and put the No. 54 into the wall. Gibbs failed to finish after running in the top five all race.

Ty Gibbs is done for the day after he and Riley Herbst come together on a restart. #NASCAR pic.twitter.com/XZtm9wwnJX

The Xfinity Series heads to New Hampshire next Saturday (July 16) for the Crayon 200. Race coverage is at 2:30 p.m. on USA Network.