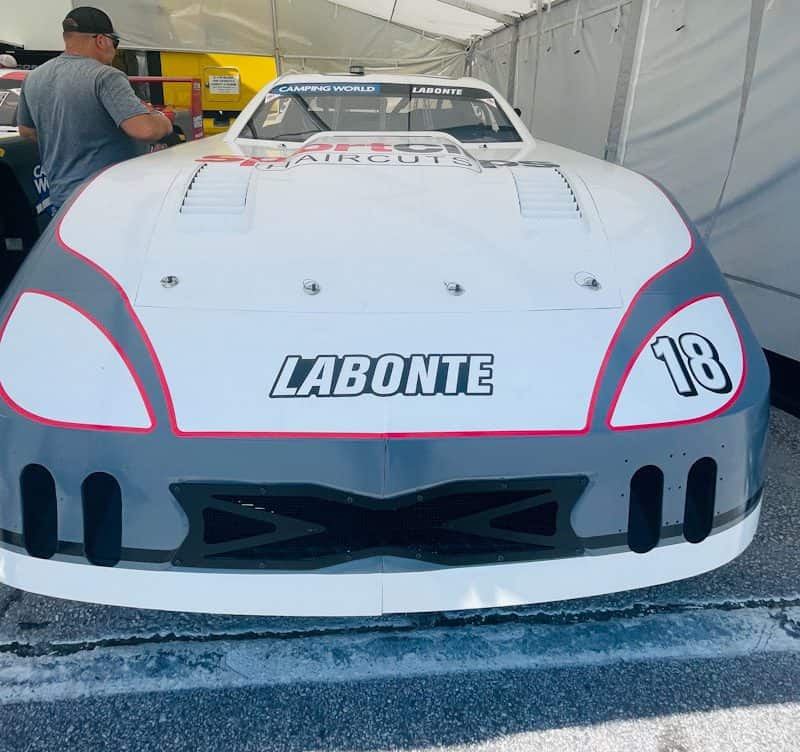 It was a season-and-a-half in the making, but Bobby Labonte finally scored his first-ever Superstar Racing Experience victory at 2022’s race at Nashville Fairgrounds Speedway.

As noted on the CBS broadcast, Labonte won at Nashville in the then-Busch Grand National Series competition almost 10,000 days prior to Saturday (July 9) night. With the 2022 triumph, he also became the oldest driver to win in SRX and has finished in the top five in all of 2022’s events.

“I didn’t run that good in practice,” Labonte said after the race. “I told Tony [Stewart], I was like, ‘I think maybe I’m just running the wrong line.’ So, usually, I try to fire off and go fast, feel like I’ve got plenty of confidence. I didn’t, but I will say that I just followed Josef [Newgarden] there early and a couple of those other guys.

“[…] These guys on this SRX group, all these men and women, you won’t believe how hard they work to get these cars to the racetrack week in and week out. […] We had a great night, a lot of fun and can’t believe I won one.”

Few rivaled the No. 18’s excellence all evening, and Marco Andretti and Matt Kenseth rounded out the podium — the latter in his first-ever appearance in the series. Much like the heat races, the top starters held: Labonte and Andretti started on the front row and finished as such.

“It’s like, ‘I just don’t think I’m ever going to win, I’m gonna finish third or fifth,'” Labonte added. “My nephew, Justin Labonte, his kid won a quarter midget race at our quarter midget track, so I had a little pressure on me today. He won $385, so I might’ve beat him now, but I’m pretty excited.

“[…] I just thought I wasn’t gonna win. I thought, ‘I’m not gonna win.’ This is so intimidating with these drivers, I’m telling you. I get nervous, I’m gonna puke with 10 to go, like ‘Oh, god, no more cautions,’ Marco and Paul [Tracy] and all these guys. Josef coming in here and running so good and never done this before, they’re just so good. So I’m just thinking, ‘man,’ I see Matt Kenseth coming and I’ve seen this story before, and I’m like ‘oh my God, here he comes.’ It’s just so hard, it’s not easy — maybe I made it look a little easy tonight, but it wasn’t easy.”

Things got underway on time despite some cloud walls to the north, but no rain impacted the race’s running. The green flag flew after an invocation from Pastor Joe Nelms, famous for his invocation prior to the 2011 then-Nationwide Series’ race at Nashville.

Yes, he thanked the Lord for his smokin’ hot wife Lisa.

Newgarden was involved in both of the night’s incidents, as he spun into the wall for the first caution for the incident, then later tangled with Tony Kanaan and hit the wall again. A late restart posed a threat to Labonte in the form of Andretti’s No. 98, and the two beat and banged for nearly an entire lap before Labonte managed to re-clear his competitor.

Stewart suffered issues during the heats and it didn’t seem like the team fixed whatever the problem was, and he mostly rode around towards the back of the field all evening.

Last week’s winner, Ryan Newman, ended up sixth, while Newgarden came home seventh despite the multiple incidents he was caught up in.

Little changed from start to finish in the opening heat, with Newgarden leading flag-to-flag en route to the win. Castroneves was second after starting second, making it an IndyCar veteran 1-2 at the green and checkered flags.

Late model fan vote winner Williams led the field to green after the field inversion and, like Newgarden, won from the pole. Andretti followed him across, while Stewart encountered mechanical issues and Castroneves suffered damage from contact with Hunter-Reay.

Next up for SRX is the penultimate event of the 2022 season, which will be held at I-55 Raceway in Missouri. The 0.333-mile dirt track plays host to the series regulars, as well as Kenseth, Kanaan, Hailie Deegan and Ken Schrader, next Saturday at 7 p.m. with coverage on CBS.

It just feels like the WWE. Waiting for Smoke to fling a chair.