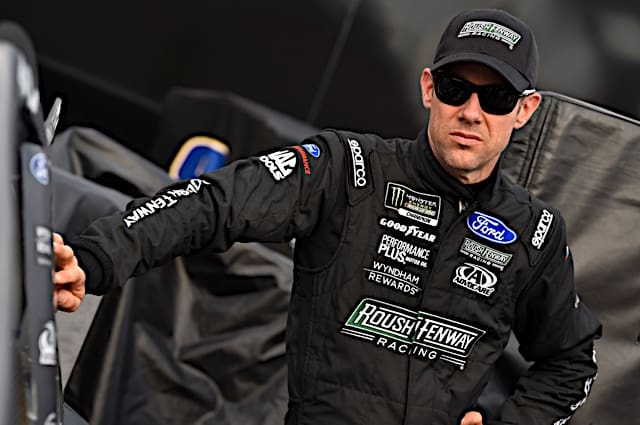 In Matt Kenseth’s heyday in the NASCAR Cup Series, the 2003 Cup champion would often start near the back of the field.

Then, as the race went on, Kenseth would steadily move up through the field before nabbing a solid top-five finish, seemingly out of nowhere. It was a style of racing reminiscent of David Pearson, one which commentators often noted on television.

Kenseth’s first appearance in SRX was more of the same, starting heat one in 11th and marching through the field for most of the night.

During the first heat, the 2023 NASCAR Hall of Fame inductee finished eighth, then fell to 11th in heat two. Kenseth followed that up by spending much of the feature saving his tires in the bottom half of the field, then started to march forward after the first competition caution about midway through the feature.

In a race dominated by Bobby Labonte and with a wall of IndyCar veterans occupying most of the top five for much of the feature, Kenseth was the only other NASCAR veteran to break through and stay through the IndyCar convoy.

At one point, Helio Castroneves got to Kenseth’s inside on the final restart, which led to an exchange that almost ended in the two time Daytona 500 champion wrecking the four time Indianapolis 500 champion. But Castroneves saved it, and Kenseth zoomed on pass into fourth. getting by Paul Tracy in the closing laps to end his first SRX night on the podium in third.

“I felt like I flopped around in the heats, my car got real loose and burnt the rear tires up,” Kenseth said in the post race interview with CBS sports. “I felt like I didn’t have any clue what I was doing. Then, in the feature, the car was better with new tires and the stagger fix. But I just kinda putted around for fifty laps or so. And then, I was trying to figure out how much time I needed to get to the front. I passed two or three of them, thought I was good, then we got a couple of cautions and outside lane restarts. Got mixed up and ran out of time. I had the best tires at the end, but I just ran out of time.”

Afterwards, Frontstretch’s own Michael Massie caught up with Kenseth, where he elaborated more on what went down in the heat.

Kenseth’s SRX debut was his first time racing these cars, against many of these drivers, and his first time competing at the Nashville Fairgrounds in at least 25 years. One thing he wasn’t counting on was just how hard it would be to pass in this series:

“It’s kinda unpredictable, you get big runs on people and you’re unsure if they’re going to give it to you or not. You have to have a real, aggressive, hard run and you almost have to make sure they feel you on their side. It’s tough.”

In the middle of our interview with Kenseth, Tracy came up to congratulate Kenseth and call him the cleanest driver out there. It speaks volumes coming from Tracy, the residential hot head of SRX, to compliment a driver like that after being denied a podium finish by him.

Looking towards the future, Kenseth will compete in the final two SRX races of the 2022 season the next two weekends, at two dirt track races. Kenseth grew up racing short track late models in the Mid-West, following in the footsteps of legends such as Dick Trickle, Rusty Wallace, and Mark Martin. Needless to say, he has no idea what to expect next weekend.

“[It’s] unpredictable. Obviously, [Nashville] was more in my wheelhouse. I’ve never really had a competitive race on dirt, I’ve done Tony [Stewart]’s Prelude To The Dream a few times with a bunch of these guys. But I’ve never really done the whole dirt racing deal before. With limited practice, I don’t really know much about dirt car racing. But it should be fun, I can’t wait to go try it.”