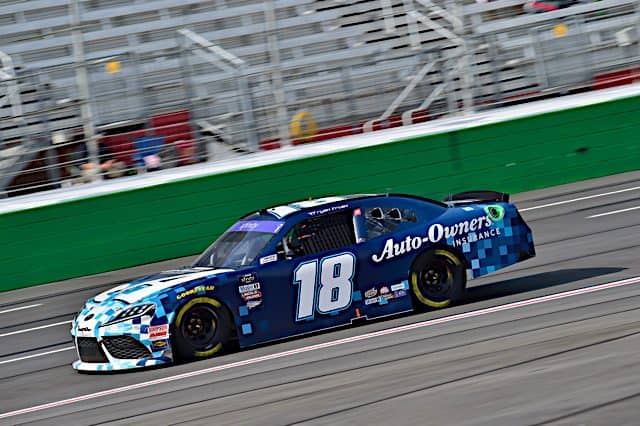 HAMPTON, Ga. – In Ryan Truex’s mind, he had piloted a car for Joe Gibbs Racing for the final time this season in the NASCAR Xfinity Series when the checkered flag flew at Texas Motor Speedway in May.

But, thanks to various factors aligning at the last minute, Truex found himself with an opportunity to reunite with JGR for Saturday’s Alsco Uniforms 250 at Atlanta Motor Speedway.

And Truex, running a part-time schedule this year that has seen him enter four other races with JGR  made the very most of that chance on what turned out to be a sweltering afternoon following rains earlier in the day. Truex forged his way to the front, entrenching himself among the lead group and even leading eight laps before finishing third behind race winner Austin Hill.

“It’s very satisfying because my last race was supposed to be in Texas,” Truex said after the race. “I don’t know where we finished there, I think it was sixth or something. Every race I have had this year, I feel like our speed has been better than where we finished. Some of it has been mistakes by me, some of it has been beyond our control. I feel like at Texas, we had a car that could have won the race, we just had a few things that went differently.”

Saturday featured a lead pack of about eight or so cars, with the group able to pull away from the rest of the field. Truex was regularly part of that group in the race’s latter half, finishing eighth at the end of the second stage. It was a departure from the March event, the first on Atlanta’s newly-reprofiled surface that lent itself to larger pack racing.

“This track is just so tight, the turns are so tight and so quick that things just happen so fast that it is so different that Daytona and Talladega,” Truex said. “Honestly, it was me just learning for the first half of the race.”

“I made a few mistakes on pit road. I think getting four tires (late in the race) was the right move for us. The car was really good on launching out of the box and got us to the front and led a few laps, but the 21 was so strong. I couldn’t keep him behind me.”

For Truex, being able to finish was a huge win, as he’s among the camp that races superspeedways fearing a subpar outcome. That wasn’t the case Saturday.

“Honestly, you come to a race like this and expect to get wrecked,” Truex said. “I’m probably not the most optimistic person, so going into a superspeedway race, I assume, ‘Okay, something’s probably going to happen,’ and when it doesn’t you are surprised and happy. It makes it extra sweet.”

Truex has no other races planned this season with the Gibbs camp, but there’s a hope within him that Saturday reinforces ongoing work to land him in a ride with JGR for 2023.

“That’s my goal, that’s what I’m working on. To be honest, that’s what we’re working towards and I’m trying to do that with JGR,” Truex said. “I’ve been close with those guys for a long time and those guys from Toyota Racing, as well. Obviously, having [brother] Martin [Truex Jr.] there helps. It feels like home to me, and hopefully, I will be there for a long time.”