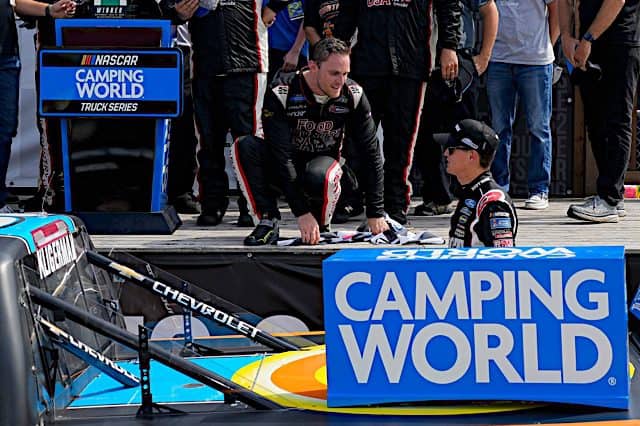 Lexington, Oh. – Zane Smith entered the penultimate race of the NASCAR Camping World Truck Series’ regular season already with a playoff berth clinched via his three victories. Throughout the 67-lap O’Reilly Auto Parts 150 on Saturday (July 9), Smith showed he indeed is the championship favorite. In addition to winning stage two to add to his series-high total of 22 playoff points, Smith had a shot at the victory.

Smith and Parker Kligerman were undoubtedly the class of the field. They battled back and forth throughout the day, a sunny, warm afternoon after the Truck drivers qualified on a wet track with constant rain. Kligerman won stage one and Smith took stage two, the pair combining to lead 64 of the 67 laps.

Smith led laps 60-64 before the final caution flag flew. On the restart, Kligerman retook the lead, and the two drove to a photo finish.

Kligerman ultimately won by 0.119 seconds over Smith, denying Smith his fourth win of 2022 and the guaranteed regular season points title.

“It was an awkward final set of corners, really, to do something with him,” Smith said post-race. “Me and Parker raced each other really good all day, so I didn’t want to be the guy to just wreck him. Really fast truck. I was really loose there once we went back green on the final restart. I felt like I just struggled with that. I felt like I struggled with that. I don’t know if I was too hard on it in that long run. Really good points day and we’ll go try again at Pocono.”

“Zane and I had a hell of a race,” he said. “He kept it clean the whole time and I think that was a little reciprocity for bumping him to the win at Daytona. But what a cool thing to finally win a road course.

“And he’s [Smith] obviously been strong everywhere. He’s on his way to Cup, did an awesome job in his Cup debut. It means a lot to beat him in a straight-up fight.”

All respect goes to @zanesmith77 for a clean race. pic.twitter.com/nZAb7UAcuO

Kligerman appreciated Smith racing him cleanly, especially after the final restart. Kligerman, of course, raced Smith cleanly throughout the race as well.

“I feel like I passed him [Smith] clean,” Kligerman said. “We did it multiple times in the race. That’s how I race. I’ve never been someone to wreck people, to knock people out of my way. I’ve had to raise my aggressiveness level in the last couple years because the series has become so close. It’s taken more aggression and to be more aggressive at times to moving people and that sort of thing. I’ve never been one as a driver to just knock someone off for wins. It’s not how I race.

“I worked on all my own stuff when I did go-karts,” he added. “I woke my parents up at 6 a.m. and be like, ‘Alright, it’s time to go to the track. Let’s go.’ And I’ve sort of pushed this rock up the hill enough to know how much goes into building these race cars to just getting to the race track. I’ve done the business side in terms of raising the money, get the marketing dollars together. The last thing I want to do is dump someone who’s had to do the same thing. I want to race you straight up, I want to beat you, and I know we can if I’m on.

Kligerman only races part-time, but he knows racing hard and cleanly will produce an exciting show for the fans, who filled the track for the inaugural Truck event there.

“If I’m at 10/10 and the team I’m on is 10/10, we can win like we did today in a straight-up. Like that was cool, the fans got a cooler show because we did that. And that’s what we’re here for; it’s a show. We don’t sell tickets to go run single-file. We sell tickets to go bang doors and to come out of there and have something to say, ‘That was fun.’ Today we did that.”

Smith left Mid-Ohio 58 points ahead of John Hunter Nemechek and Chandler Smith. Realistically, he will indeed claim the regular season title at Pocono Raceway. Yes, even though Kligerman races part-time, he knew Smith’s points situation. Add in Kligerrman pushing Smith to the season-opening victory at Daytona International Speedway and the clean racing between the two is even more impressive.

“I thought about it the whole time,” Kligerman stated. “So he was racing me cleanly the whole race and right on my bumper. Like when we got to the end of stage two, I sorta let him have it cause I was killing my brakes trying to stay ahead of him. But we raced each other super clean and I think a lot of that was that was on both our minds. Like, ‘I pushed you to the win to start off the season. You won the first race of the year. It pays the most too, that race. Maybe this one pays more with the $50k bonus, I don’t know. That one pays a lot. I get paid by prize money so it means a lot to me when we finish in the front.

“Just as racers, we don’t forget,” he added. “People say that often about the bad side of when you’ve been wronged, but you also remember when you’ve had something go in your favor, someone treated you right. Driving as hard as we are in the closing laps, that’s going to enter your brain. You’ve got the mental capacity. He’s a hell of a talent on the fast track to Cup. He’s going to be in Cup for a very long time. I think he absolutely has that ability to think about that because that’s why he’s in the position that he is. That’s why he’s a winner, why he’s in command of this series, why he’ll give it a championship fight. He has that mental capacity to be thinking about those things from Daytona to still be battling for a win at Mid-Ohio on a road course. That doesn’t surprise me at all.”

When Smith clinches the regular season crown at Pocono, he will earn another 15 playoff points, to be carried throughout the playoffs, as he seeks his first Truck Series championship.

“I’m not concerned about the cut line,” Smith said as he looks ahead to the playoffs. “I feel like we have a pretty good team and a good year so far with good playoff points. I’ll focus on these playoffs once they get started.”

Smith has back-to-back runner-up championship points finishes. Continued contending finishes like his drive at Mid-Ohio might finally reward him with his first-ever title.

One of the best things about racing cleanly, is that you never have to put a spin (no pun intended) on it, or make excused to try to justify it.
Logano should take notes on the way they raced each other.