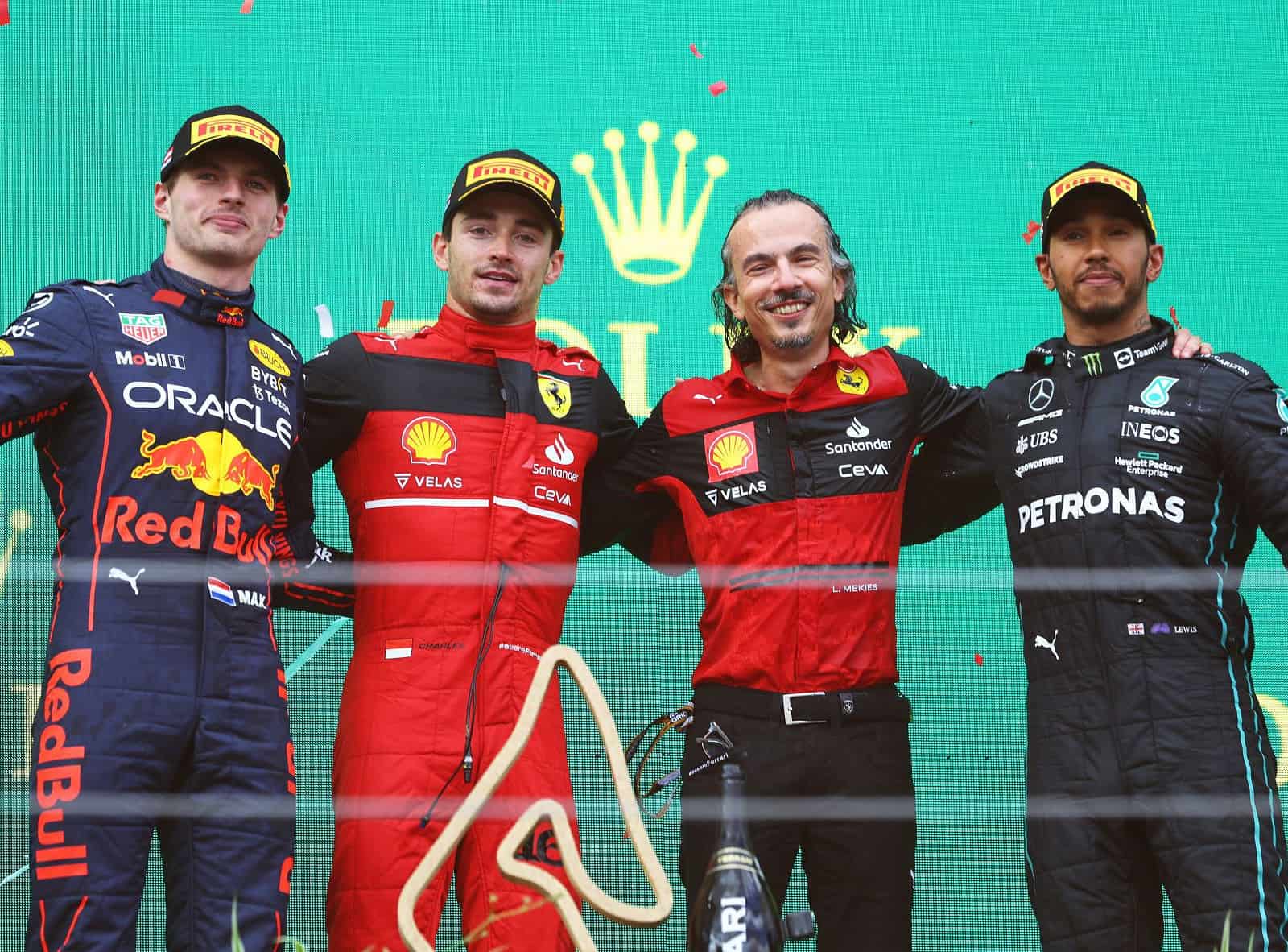 “The end was incredibly difficult,” Leclerc said after the race to Formula 1 Media podium interviewer David Coulthard. “I had this problem with the throttle where it would got stuck at 20-30 percent in the low speeds. Very tricky, but we managed to make it stick until the end.”

On lap 58, Leclerc’s teammate Carlos Sainz was catching Verstappen for second place when the Ferrari’s engine blew up. The car began to burst into flames, but Sainz got out right before the flames visually made it to the cockpit. Sainz was uninjured, but did not finish the race.

This led to plenty of concern following the subsequent virtual safety car period, when Leclerc began reporting those throttle issues. Still, the Monaco native used his four-second cushion on the Dutchman to max effect, keeping the lead in spite of Verstappen turning the fastest lap in the closing sections of the race. Verstappen ended up a second and a half short in second place.

Lewis Hamilton swiped yet another podium, finishing third after Sainz fell out.

On lap one, Sergio Perez and George Russell came into contact in turn 4. Perez eventually retired from the race due to the damage, while Russell continued on but was slapped with a five-second time penalty. Russell was able to recover to finish fourth.

Perez spins off into the Turn 4 gravel after contact with Russell.

The Mexican makes it back to the pits and switches to hard tyres. He returns to the track in last place.#AustrianGP #F1 pic.twitter.com/rZG4aJnNoy

Esteban Ocon finished a solid fifth and Mick Schumacher, the driver of the day, followed up his first points finish last week at Silverstone Circuit to finish sixth for even more points. Lando Norris finished seventh and Kevin Magnussen eighth, making it a double points finish for Haas. Daniel Ricciardo had a solid ninth-place finish.

Fernando Alonso finished 10th, but as of press time, the two-time World Drivers Champion was under investigation for an unsafe pit stop release by his Alpine team and may well end up losing the final point awarded on the day to Valtteri Bottas, who finished 11th.

On lap 40, Sebastian Vettel spun out in turn 4 but continued, the incident coming after some contact with Pierre Gasly. Gasly later received a five-second penalty for causing a collision, similar to Russell.

There were a number of penalties throughout the day due to exceeding track limits too many times. Norris, Gasly and Zhou Guanyu received penalties for such an infraction, with notable drivers such as Hamilton and Vettel also receiving black-and-white flags as final warnings.

Leclerc gained six points on Verstappen in the WDC standings, now being 38 points behind the Dutchman halfway through the 22-race season. Ferrari thus also gained six points on Red Bull in constructors, but has more of an uphill battle there being down 56 in total. McLaren and Alpine are now tied for fourth in points as the battle for the best of the midfield begins to take shape.

Circuit Paul Ricard plays host to F1’s next event in the French Grand Prix, which will be held in two weeks on Sunday, July 24 at 9 a.m. ET.