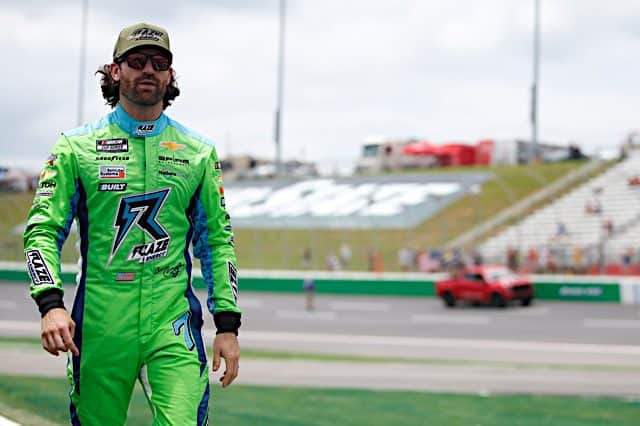 HAMPTON, Ga. – The front of his car smashed in, Corey LaJoie’s No. 7 Spire Motorsports Chevrolet rested on pit road, later needing a tow to get to the garage area to be loaded up and onto the transporter following Sunday’s Quaker State 400 at Atlanta Motor Speedway.

There was much more to what LaJoie did on Sunday than that brief post-race image, however. He was two laps from pulling off a stunning upset, spoiling hopes of a sentimental win by the sport’s most popular driver, Chase Elliott, at his home track.

Instead, the final laps shattered Cinderella’s slipper into pieces. Elliott got by on the high side going into turn 1 with two laps to go before a final-lap charge by LaJoie coming off turn 2 on the high side was blocked by Elliott, stemming LaJoie’s momentum and forcing him into the outside wall. He was credited with a 21st-place finish as the caution flag during overtime declared Elliott the winner.

“I certainly expected that,” LaJoie said of Elliott’s block. “That’s what you’re supposed to do, right? You’re going for the win.”

LaJoie was no doubt a sentimental favorite. And Sunday’s race-winning owner, who LaJoie previously sent a hand-written letter requesting consideration for the No. 48 car, was among them.

LaJoie’s father, Randy, a two-time champion in the Xfinity Series, was a replacement driver for Ricky Craven during the 1998 Cup season for Hendrick Motorsports.

“I was proud, I was excited,” said Hendrick Motorsports owner Rick Hendrick. “If we couldn’t win, I really wanted him to win. We do the motors for them and share a lot of things with (Spire Motorsports). He’s a great guy. I think a lot of (Spire Motorsports co-owner Jeff) Dickerson and those guys.

“That was a Cinderella story. If we couldn’t win, I wanted him to win because he drove a heck of a race. He did a heck of a job. He looked as good as anybody in this field out there.”

During a time of the season where the chatter surrounds playoff positioning, it was LaJoie and his No. 7 out of the Spire Motorsports stable that, thanks to strategy as the race went on, found his way near the front. But LaJoie didn’t run a few token laps near the front. Rather, he stayed there, leading 19 laps.

“It’s a little bit emotional,” Lajoie said of racing against Elliott for the win. “The last time I raced with nobody in front of us but the pace car was 10 years ago. Obviously, our careers have taken different trajectories, a bit. I do feel like I am capable in the right scenario. With these guys I am with now, they do a good job for me. We’ve had a tough little stretch. If anything, it’s proving to ourselves that we can do it.”

LaJoie continues to carve himself out as a strong competitor on superspeedways. He was fifth in Atlanta in March, and last August at Daytona was among the frontrunners in the late going.

“When you have a day like we did (Sunday) when we hit it all, we can be as good as the powerhouses,” LaJoie said. “We can’t spring those runs together every week, because we don’t have the depth. But to have these runs occasionally, it makes you feel good.”

But don’t brand LaJoie’s run as a one or two-hit wonder.

“I love the (Atlanta) repave, I don’t know that I ever finished better than 21st here, ever before that,” LaJoie said. “I like the challenge. Obviously, it’s a bit of an equalizer. People can discredit what we did today all they want. I know enough about the narrative of ‘oh, it’s just a speedway.’ There’s 35 other guys that had the same opportunity to put themselves in the same position at the end of it that we did. The guy who is running sixth is trying no less hard than the guy running first or the guy funning 25th.”

In the end, LaJoie had a chance to an upset win that he was within two laps of. And it’s a chance that he has no regrets taking.