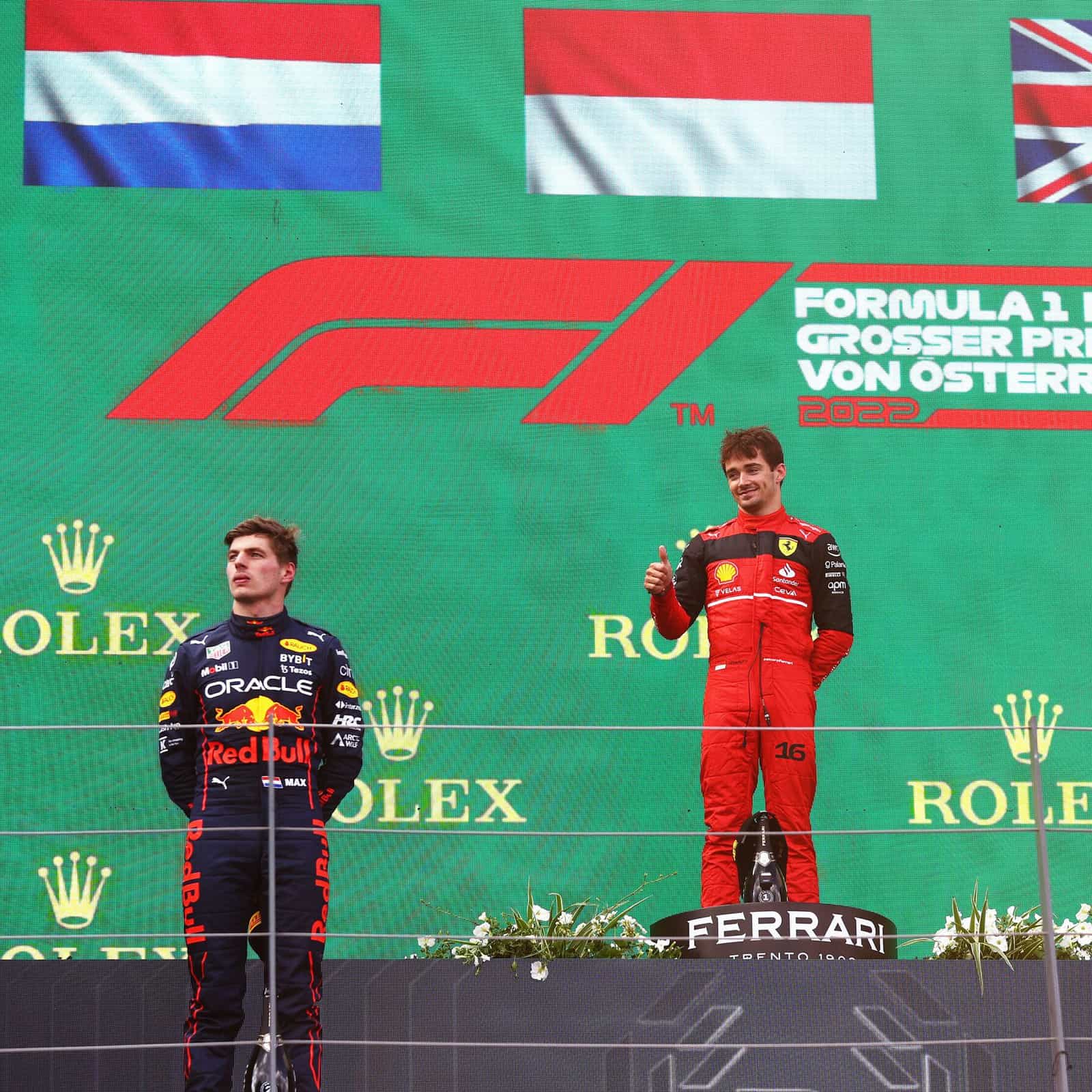 Charles Leclerc earned his third win of the 2022 Formula 1 season on Sunday (July 10) at the Austrian Grand Prix. What had looked like a race that Max Verstappen would dominate turned into one where Leclerc became the force and appeared to be on his way to an easy victory, easily outperforming Verstappen, only to hold on against a throttle issue that gave away tenths of a second at will in the closing laps.

With the win, Leclerc chipped into Verstappen’s championship lead, cutting it to 38 points (208–170). For Verstappen, his masterful weekend came undone with the cooler temps on race day–after taking first in qualifying and then winning the sprint race on Saturday. His second-place finish also broke his string of not going more than one race without a win (having earned seventh at Silverstone).

Lewis Hamilton benefitted from fallen cars in front of him and earned his third-straight third-place result of the season. He showed genuine pace in his Mercedes but was still not able to keep up with the frontrunners.

George Russell came back to take fourth after a first-lap collision with Sergio Perez sent him tumbling down the order. He suffered a five-second penalty for the contact and also got fitted for a new front wing yet managed to climb back to his starting spot.

Esteban Ocon gave Alpine reason to smile by taking fifth for the French team. One of the surprises of the day came with Mick Schumacher earning sixth, his best-ever result. Lando Norris backed up his sixth from Silverstone with a seventh-place result in Austria.

Kevin Magnussen wound up eighth, and coupled with Schumacher’s finish gave Haas its second double-points finish in what is turning out to be a decent season for what has consistently been a backmarker team.

Daniel Ricciardo crossed the line in ninth, giving McLaren just its third double-points finish of 2022. Fernando Alonso passed Valtteri Bottas on the final lap to take 10th and the final point of the race. McLaren and Alpine are now tied on points with 81 in the fourth spot of the constructor’s standings.

Aside from Russell punting Perez at the start of the race, much of the action came off cleanly. While Russell recovered, Perez endured enough damage that the team had him retire his limping Red Bull on lap 24.

By that point, the Verstappen’s Red Bull had begun to show its limitations, and by lap 33, Leclerc asserted himself as the driver to beat. His Ferrari managed its tyres better, and no one seemed to have any kind of measure to challenge him.

While the overtaking came off cleanly, Lando Norris, Zhou Guanyu, Pierre Gasly and Sebastian Vettel all received five-second penalties for exceeding track limits. Even Hamilton earned himself a warning for the infringement at the midpoint of the race.

For Leclerc, his two biggest obstacles came from his own team. The first came when Carlos Sainz’s engine gave out and caught fire, slowing the field with a virtual safety car. The failure highlighted how Sainz has been felled by four DNFs and Leclerc two during the year, and how the Ferrari’s reliability is a major concern.

And almost on cue, Leclerc started facing problems with his throttle becoming stuck. Unable to fully return to less throttle, the car’s onboard would not allow Leclerc to shift at times. While he could still find speed on the straights, he could not take the turns in the same way he had during his earlier times leading. This hiccup allowed Verstappen to close the gap from nearly six seconds to under two, giving the race for the win some late drama.

With Leclerc’s win, the driver’s championship has tightened with Verstappen’s edge over him now down to 38 points (208–170). Verstappen has been ruling the roost, and his six wins certainly position him as the odds-on favorite to take the title. But Ferrari have frequently given Leclerc a car capable of beating Verstappen, only to be undone by idiotic decision-making or reliability problems. With Leclerc’s win, the notion of hope remains. That Ferrari have won the past two races provides evidence that they are making better decisions.

Track limits became a major story for the weekend. Perez dropped from fourth in qualifying to 13th after having laps deleted because of exceeding track limits. He was not the only one to have laps taken away, and such policing was mirrored in the race. With four drivers eventually earning penalties, clearly, the race directors were trying to send a message.

The question is, what was the goal? Sure, the racing surface is the confines of the sport, but this aspect seemed to be overdone and the end result is that for all the scrutiny, the efforts did little to actually change anything regarding the results. Having officials make these judgment calls becomes a bit too much in how the sport is refereed, and maybe a better solution can be found in trying to keep cars on the track.

Is Mercedes actually getting better or is it getting lucky? Hamilton scoring three straight podiums would usually come across as the natural order of the universe, but this season has proven that Superman still needs his red cape. With an underperforming car, Hamilton has been doing everything he can to find speed, while letting his teammate forge ahead with more conventional setups. The overall result is that Mercedes continues to look like the third-fastest team but keeps scoring a decent result because of miscues. But Mercedes also seem to be gaining performance, and there is reason to believe a top-three start is in the offing — or maybe it’s a mirage. This conundrum might not find a real understanding until after the summer break.

Mick Schumacher, not only scored points again for Haas, but he earned his best finish and beat his teammate. It took three years and 31 races for Schumacher to score his first F1 points, having done so at least week’s British GP when he finished eighth, but he is beginning to show some of the talent that his potential suggests he has.

As a fan favorite and recognizable name, Schumacher has been in the spotlight for years. Now, with two solid performances, perhaps there is reason to believe that he will be worthy not only of the attention but of moving up into a better seat in the near future. Two good finishes do not make a career, but maybe it is the start of one.

– An overjoyed Leclerc said, “Every win is special, but this one feels just amazing. The last 15 laps were on the limit with the issue we had, but we brought it home. Today, we had a really strong pace and some great battles. I worked hard last night to find where I could still improve and it made the difference today. I’m very happy!”

– Verstappen acknowledged the tyre concerns with his Red Bull, stating, “We were just a bit too slow today, we were doing the best we could with the strategy but the Ferraris were extremely fast. Of course, we need to understand why we had so much degradation with the tyres, I’m not sure exactly what happened, no matter which compound we used none of them seemed to work well.”

– Esteban Ocon came across as elated after finishing fifth, saying, “What a day, what a weekend! I think we really maximized our pace today when it really mattered. This is a great way to end my 100th Grand Prix in Formula 1. We had some good battles on the track today, but in the end George [Russell] was too fast and fifth place was the best result we could obtain.”