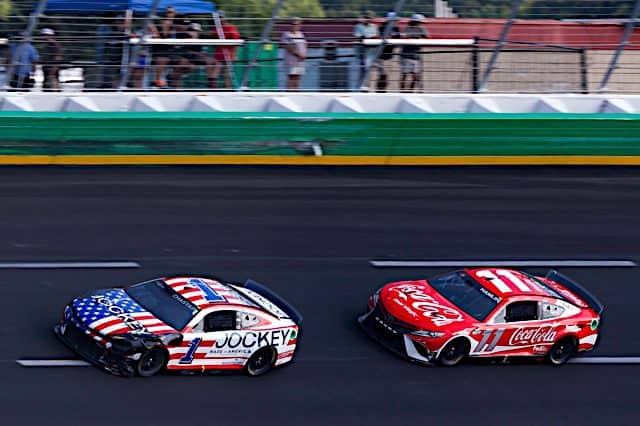 That continued on Sunday at Atlanta Motor Speedway during the Quaker State 400.

Chastain, who at the end of the race had battled to finish second, drew heat for a pair of separate run-ins in which his No. 1 car had a role in incidents with that of Austin Dillon and, later, Denny Hamlin.

The second-stage, nine-car wreck ended the day for Dillon, who as a result has failed to finish both races at the new version of Atlanta Motor Speedway.

“It’s just unfortunate,” Dillon said. “It seems like every week, he is part of something. They’ve gotten a lot of praise this year because they have been pretty good, and it seems like he’s in something every week.”

Hamlin, who vowed to at some point deal some payback following a run-in between the two drivers in June at Worldwide Technology Raceway at Gateway, sustained damage in the final stage following contact from the inside of his car going into the third turn.

“We were in a pretty good position but got taken out,” Hamlin said as he walked from his car to the garage following Sunday’s race.

Chastain, however, drew a firm line in that contact as opposed to instances earlier in the season. He pointed out that his car had sustained earlier damage during a nine-car incident near the race’s midpoint that he battled back from, thus impacting the car’s handling.

“This one is so different because I had so much damage. You all know I would take full responsibility if I just ran into him, but I had so much damage and was so much tighter,” Chastain said. “We had done a lot to free the car up. It was just way too tight and I couldn’t carry the throttle that I carried earlier. I could have lifted some, but it wasn’t enough. I don’t put this one anywhere near the others.”

That was little solace to Hamlin.

“I don’t know, everyone has different tolerance levels,” Hamlin said. “But, as you guys know, I’ve reached my peak.”

For those two to cry is ridiculous. Ask Almirola about Daytona. Ask anyone about Hamlin. Yes Ross puts himself in some bad places but those guys have no room to talk. Especially Grandpa’s boy. He shames the 3.

On lap 25 Hamlin hit Chastain in the left rear and moved him out of his way. Chastain is “racing” Hamlin the way Hamlin “races” everyone else. Chastain just paid Hamlin back for earlier in the event. Hamlin is acting like the entitled child he is and is perfect for Reverend Joe.

I believe hamlin has the same amount of Cup Championships as Chastain,hamlin like to act like he is some kind of big time NASCAR champion when he has won nothing but races

Silver spoon dillon is a joke, Wins the Daytona 500 by wrecking another driver on the last lap to win, Now he crys about other drivers, Silver Spoon Joke Boy

Yeah, I thought Dillon had no room to talk with his history. I think is fake reality TV show is going to his head.

Hamlin should think about retiring and mellon head dillion is a never was hasbeen.