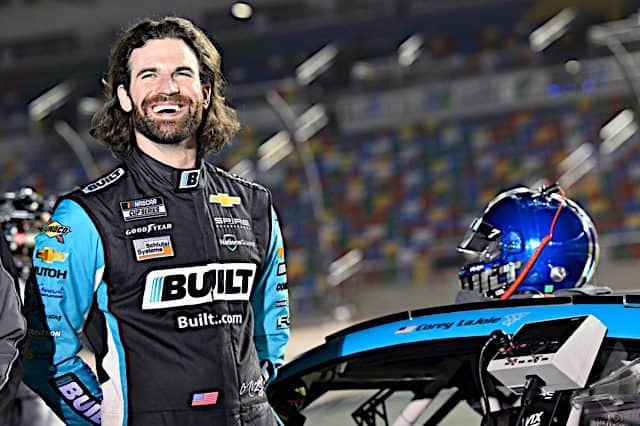 Besides the sport of NASCAR, I am a huge tennis fan. Over the past two weeks, I have consumed media and television more than I probably should have to watch the illustrious Wimbledon Championships. This time around, both the men’s and women’s fields were somewhat unpredictable due to several factors. In the end, several underdogs made deep runs, with one even coming out on top with a title and another falling just short of glory.

In outside ways, the Quaker State 400 at Atlanta Motor Speedway (July 10) reminded me of that. The new, “improved” superspeedway style of racing at Atlanta gave mostly everyone a shot to win, with several underdogs looking to hit a winner and land in victory lane. A wild race saw one underdog come moments away from an upset for the ages, while another salvaged a strong top five. That would be Erik Jones, who survived the new beast of racing in Georgia to earn a fourth-place finish.

The last time the circuit visited a track with superspeedway racing, Jones made a move at Talladega Superspeedway on the final lap in the tri-oval that likely keeps him awake at night. With another prime opportunity, he was ready to cash in.

It didn’t start out great, though. After finishing 14th in stage one, Jones got into the wall early in stage two. Fortunately, there was very little impact from it and it even helped Jones avoid a big wreck. The Byron, Mich. native was a factor at the front of the field from the midpoint of stage two on. In the final stage, his Petty GMS Motorsports team suffered a range of emotions.

Petty GMS teammate Ty Dillon was involved in his second accident of the race when Garrett Smithley experienced an issue and slowed in front of Dillon. At the same time, Jones drove to the lead with just over 85 laps to go, putting his No. 43 FOCUSfactor Chevrolet in contention for the victory.

Erik Jones is fifth under this caution.

The last time the No. 43 won at Atlanta:

Not many drivers had more scares than Jones in the closing stages. Drivers spun in front of and behind him several times in the final part of the event, but the 26-year-old kept it clean, putting him in a strong position to fight for the win.

Jones lined up in sixth on the final restart. He quickly pushed eventual race winner Chase Elliott past Martin Truex Jr. and ultimately to the lead. The No. 43 got side-by-side with Corey LaJoie for second, but could not quite clear him, allowing LaJoie to retain the runner-up spot. On the final lap, LaJoie was blocked by Elliott, slid into the wall and collected other cars in a big crash.

The wreck triggered the yellow flag, ending the race and once again leaving Jones oh-so-close in the fourth position.

Despite the heartbreak of being so close to victory, it was a much-needed top five for Jones. It was his first such result since the second race of the year at Auto Club Speedway and his first top 10 since World Wide Technology Raceway. Jones’s six top 10s now match his total from a year ago in his first season with Petty GMS. It is a sure sign of growth from a year ago, but this is a team hungry for victory lane.

Jones may have come away with the top underdog result, but it was LaJoie who nearly hit a forehand winner (yes, that is a tennis term), and in a big way. LaJoie called his shot on his “Stacking Pennies” podcast earlier this week, saying that he was coming to win, not hanging in the back and hoping for the seas to part. The last time the series visited Atlanta, LaJoie spun out and briefly got airborne in the grass only to come back and finish in fifth.

There has been much talk recently about new winners in 2022 and first-time winners, with five already in 2022. Outside of superspeedways, there was not much confidence the Cup Series would get a first-time winner for a while. LaJoie made it a mission to erase that doubt sooner rather than later.

Avoiding all of the late-race melee, LaJoie took the lead on lap 193. Despite the power from drivers like Elliott and Ross Chastain, LaJoie didn’t back down, proving why he should be racing on Sundays. He flashed that after losing the lead to Elliott on lap 202, only to turn it around on him the very next lap. As the laps wore on and drivers fell out of contention, LaJoie began to taste victory. He flexed his muscles once more on lap 253, taking the lead from Truex on a restart.

On the final restart, LaJoie restarted from the lead but was passed by Elliott. Now, flash back to 1992, a race that was referenced heavily on Sunday’s broadcast. Elliott’s dad, Bill won the race but lose out in the championship battle to Alan Kulwicki, who piloted the No. 7. Kuliwicki’s former shop is now home to Spire Motorsports.

Entering the final turn on the last lap, LaJoie went for one final punch to put the No. 7 in victory lane again. He drove to the outside of Elliott but was immediately blocked. The block caused LaJoie to slip, sending him into the wall, back down the track and collecting multiple cars along the way. Instead of a possible win or even a top five for his efforts all day, LaJoie instead walked away with a 21st-place showing for the Spire Motorsports driver.

This was supposed to be his moment. Coming into the race 31st in points, LaJoie knew he needed a win and then some to crash the playoff party. He had every reason to be upset, infuriated and bitter in the end. However, the Charlotte, N.C. native did what has won him the hearts of so many race fans. Elliott did what he had to and LaJoie went to victory lane not to confront him, but to congratulate him. Eventually, this nice guy’s time will come.

Frontstretch was able to catch up with LaJoie after the race, who proclaimed, “I wouldn’t change a thing.”

Another underdog continued his underdog prowess at superspeedway-style racing with a top-10 run. That would be Justin Haley, whose seventh-place result was his second top 10 of the 2022 season. Those two top 10s match those from last year with Spire Motorsports, where he ran part-time.

Haley, a four-time superspeedway winner in the NASCAR Xfinity Series, kept his No. 31 LeafFilter Chevrolet clean and inside the top 20 most of the race before entering the top 10 late in the race. While Jones and LaJoie looked to shake up the playoff grid, Haley was not to be forgotten. He came up just short, but will certainly leave Atlanta with a good feeling.

Erik Jones (fourth): “It’s motivating. I think our superspeedway and 1.5-mile stuff has been so good all year. We were close here in the spring in the end and we were close again today. We were close at Talladega and close in Daytona. So, all the superspeedway races, we’ve been really fast. We’re there, we just need to have one play out for us. I would have loved to have run that last lap out. I think Ross (Chastain) and Chase (Elliott) were going to run each other pretty hard in (turns) three and four, and I would have loved to have a chance to make something happen. I feel like we’ve been close at a lot of superspeedways, just haven’t closed one out. I would love to get the No. 43 in victory lane and I hope we can do it before the playoffs.

Justin Haley (seventh): “It was a good day again here in Atlanta. I feel like this No. 31 LeafFilter Chevrolet team has succeeded in finding a good, fast, stable setup for the new Atlanta track. So overall it was a good day and just a little bit better than where we were in the spring.”

Noah Gragson (34th): “We had an early end to our day in the No. 16 Gold Fish Casino Slots Camaro. We were on track to have a really solid day and showed some speed. Unfortunately, we couldn’t avoid a wreck in front of us that caused heavy damage to the right front. We had nowhere to go, but I hate it for everyone at Kaulig Racing who have been working hard on these cars.”

The car that nearly won the race ended up ready for the dumpster, but that doesn’t take away from LaJoie’s performance nor the look of his car. Sporting Raze Energy on the car, LaJoie’s No. 7 was different from the last time Raze appeared on the car, which was a “peaches n’ cream” version at Talladega. The car featured blue and a neon yellow combination that certainly brought energy to the track.

He’ll be back to his normal position next event.

WTH was the 15 doing running that close to the leaders? He’s a rolling roadblock that had already been given a free pass. It was a recipe for disaster.

The shoving got a little more aggressive than Lajoie’s car could handle. He was loose and the desperation move up in the marbles did him in. I like to see the underdog do well, but Elliot had the fastest car.

He did not have the faster car at that point. The little twirp Elliot ran him up into the wall. Thats ok because he is a Hendric car. I hope Lajoie puts him into the wall next.