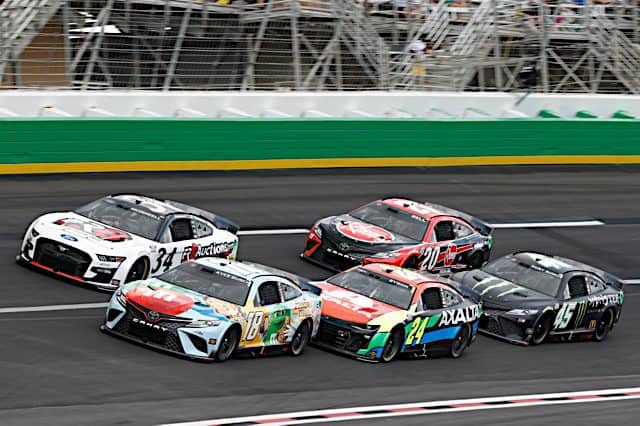 Chase Elliott absolutely dominated at his home track, leading 96 of the 260 laps and sweeping all three stages to win the Quaker State 400 at Atlanta Motor Speedway. The Dawsonville, Georgia native picked up his first career win at his home track and solidified a weekend sweep of Georgia drivers only one day after Winston native Austin Hill won the Xfinity race.

Ross Chastain, after being involved in several incidents throughout the race, brought his battered No. 1 home second, followed by Austin Cindric finishing a solid third. Erik Jones finished fourth, and Ryan Blaney rounded out the top five.

How Did It Happen?

Much like Road America, Elliott had been a contender all day, leading the most laps and sweeping the stages. But a couple of late race cautions involving Denny Hamlin (more on that later) bunched up the field and saw Elliott restarting in the back half of the top five. The leader on the final restart? Corey LaJoie. LaJoie had been a quiet threat all day and suddenly found himself with a legitimate chance to pull off one of the biggest upsets in recent years with just three laps to go.

After Elliott stormed to the lead with two to go, LaJoie gained a bunch of momentum thanks to a push from Jones heading into turn 1 for the final time. Elliott blocked the oncoming run, but at the expense of LaJoie’s car hitting the wall, sliding back down into traffic, catching Blaney, and slamming the wall again while also collecting Kurt Busch.

The caution came out just before Chastain could make a pass on Elliott, solidifying his victory.

I don’t know whether to put LaJoie as a driver who stood out or fell flat. After all, he had a phenomenal day, leading 19 laps, scoring stage points, and riding in the top 10 for a good chunk of the race. However, he leaves Atlanta with a “what-could-have-been” on his mind, and the race-winning move he made ended in a wrecked race car. To make things worse, he didn’t even finish in the top 20. Instead he ended up 21st on the day.

LaJoie gave Spire Motorsports its best chance to win since the team’s shock win with Justin Haley at Daytona International Speedway in 2019, and it was a valiant effort, despite the poor finish. Well done, Corey, well done.

It’s very rare to see Kyle Busch essentially ride around to the finish, as he usually finishes on the lead lap or crashes out completely. But he did just that at Atlanta. Kyle Busch had been caught up in the first Big One of the day on lap 91, slamming into a spinning Joey Logano.

It didn’t get any better for him, as he spun out late in the race while running near Cody Ware, who also spun in an unrelated crash. Kyle Busch, however, wasn’t very kind about the way Ware and other drivers around at the time were racing him.

"Apparently when you run back here the spotters don't stay awake."

Kyle Busch managed to salvage 20th out of the day, but it was a very uncharacteristic day for the Candyman.

What Did This Race Prove?

Chastain still has a lot to learn, despite what he says.

Chastain had his second run-in of the season with Hamlin after washing up the track and turning the No. 11 with around 15 laps to go. Before that, he was the one who ignited the Big One that collected Busch, after turning Busch’s teammate, Martin Truex Jr.

Drivers all over the garage area are now beginning to take more and more shots at Chastain. Austin Dillon emerged from the infield care center and told NBC that he was “just another casualty of Ross Chastain, once again.” Dillon took a big hit in the Big One and was very unhappy with how it started.

"When you've got guys like (Ross Chastain) wrecking half the field, you might as well take a different strategy."

Austin Dillon called out the driver of the No. 1 car after a big hit at @amsupdates. #NASCAR pic.twitter.com/x9AOiNiIII

Later, Aric Almirola was very displeased with the driver of the No. 1, telling his team on the radio that “He’s a (expletive) idiot, and he knows it.” One of Almirola’s crew members responded that “[Chastain] better hope I don’t see him in a Food Lion.”

Finally, Hamlin has about reached his breaking point with Chastain, after several run-ins at World Wide Technology Raceway a few weeks ago left him frustrated. Chastain apologized for turning Hamlin at Atlanta, just as he apologized for wrecking so many people at World Wide Technology Raceway, but even broadcasters began calling out Chastain’s lack of visible improvement.

Hamlin, meanwhile, has had it with the No. 1.

"Things just work themselves out in the end. We certainly aren't cutting any breaks going forward."- Denny Hamlin pic.twitter.com/xFnP7obWzF

All that to say, Chastain has made his mistakes, which everyone does, but certain drivers have now felt that enough is enough. Chastain has apologized and claimed that he will do better multiple times, but it’s clear that drivers, fans, and now broadcasters are not seeing it right now. The rest of Chastain’s season is not getting easier based on the amount of times he’s run into drivers.

This is the second time the series has run on the newly reconfigured Atlanta, and we saw just as much movement in the draft as we did in March.

The key difference in this race? Tire failures were few and far between. In March, it seemed like there was a curse on right rear tires, as driver after driver blew a tire and crashed, mostly from the lead or top five at worst.

However, this time around there was one notable tire failure, and that came from the No. 48 of Alex Bowman. Other than that, the tires held up pretty well this time around. But it makes one wonder why they held up so well this time compared to last time. The temperature might have something to do with it, or it could be that this track now has a couple of races under its belt for the new configuration. Either way, most of the crashes in the race could not be blamed on the tires like it was last time.

Despite the eventful race, it’s still too early to tell whether or not this whole “superspeedway racing on an intermediate track” thing is going to stay popular with fans or not.

Despite his troubles, Hamlin finished 25th in a really good-looking car.

Some drivers have sponsors that they will forever associate their career with. For Hamlin, it’s FedEx. But this weekend, Coca-Cola adorned the No. 11 for the first time in Hamlin’s career. And man did the longtime “Official Drink of NASCAR” make the most of the opportunity with this beauteous white and red scheme.

And there was no better choice of driver to carry a Coca-Cola sponsorship than one of the active members of the Coca-Cola Racing Family, who also won the pole AND the race for the Coca-Cola 600 at Charlotte Motor Speedway this past Memorial Day weekend.

Time to head up north.

The NASCAR Cup Series will make its way to New Hampshire Motor Speedway for its lone trip to the Magic Mile. Qualifying will begin at approximately 12:20 p.m. ET on Saturday, July 16, while coverage for the Ambetter 301 begins at 3 p.m. ET on Sunday, July 17, on USA Network.

Seeing a great track ruined by new configuration and a spec car was annoying enough. After a few laps of listening to Burton and Little E holding back their disdain, I moved on. I could care less about college baseball, but I wanted to watch a sport where winners are determined by merit instead of complete random luck.

I agree with the first sentence but not the last. While it is true that restrictor plate tracks often are determined by random luck (i.e., missing the big ones and being one of the survivors), it’s hard to say there was anything random about yesterday. Elliott won every stage and the race, led a ton of laps, and ran up front all day. That doesn’t fit the definition of random.

Right, and Corey LaJoie almost won because of his unmatched skill? Chase Elliott had a slight edge over the other cars just like Michael Waltrip used to. Look at the results of any plate race and you see great drivers at the bottom and mediocre ones at the top. Has nothing to do with driver skill at all.

Most sporting leagues are manipulated to some point. It just depends how much one is willing to let happen. In the MLB, the umpires seem to call balls and strikes at random now. The referees in football pick and choose when to call holding penalties. NBA refs hardly call walks and travels. I have learned to just enjoy whatever sport I enjoy, which for me is motorsports and college football. I have swayed away from Professional stick and ball sports. Most of them proved there worth when complaining about how much money they were making in 2020. It just kind of makes one sick to here millionaires complain about the lack of money.

They all do it to an extent but no sport bows to the altar of “parity” like NASCAR does. Every plate race they hold up some perennial backmarker’s top ten finish like it’s some sort of great achievement. This completely spec car has produced a different winner every week, and NASCAR is blowing itself over having eliminated a potential Kyle Larson dynasty. Who’s good this year? Ross Chastain? We don’t know!!

God forbid we have another driver who beats the rest of the field more than twice a year. Because Petty, Earnhardt and Gordon almost killed the sport, right?

The only difference between Chastain and Earnhardt Sr. Is that Chastain apologizes and Dale Sr. would smile and make a comment about rattling a cage or ants biting a candy ass.

The drivers are a lot different today too. The entitled babies now wouldn’t say a word about Ironhead after he rattled their cages.