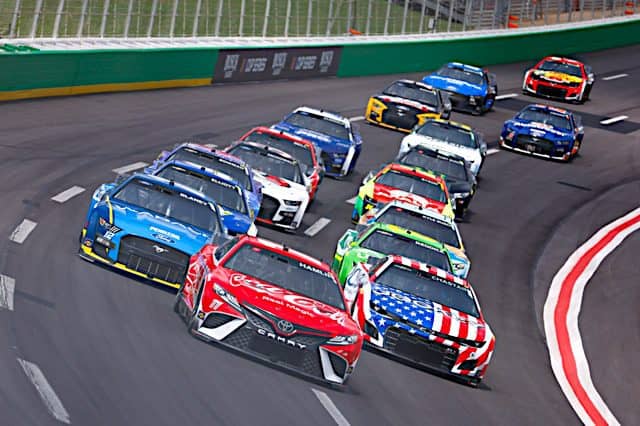 Sunday marked the second NASCAR Cup Series race at the recently redesigned Atlanta Motor Speedway. Both races have produced a style of competition more like restrictor plate racing than what you would see at a traditional intermediate track.

In fact, the racing at Atlanta resembled that of Daytona International Speedway and Talladega Superspeedway in the early 1990s. Instead of one giant pack of 30 or more cars running closely together, the field broke up into smaller groups of around 10 cars. Handling was at more of a premium at Atlanta, and having a car that could navigate traffic was crucial to securing a good finish. Not everyone will like the new Atlanta, but it is interesting to see how the track’s reconfiguration brought back an old style of racing that is unique to the current landscape of NASCAR.

For the foreseeable future, it looks like Atlanta is going to produce superspeedway-style racing. Therefore, a schedule change is in order for 2023. NASCAR ought to move Atlanta’s summer race to the regular season finale. Daytona’s summertime race can then go back to its proper date around the Fourth of July. Road America’s race can remain on the Cup Series schedule in the date currently occupied by Atlanta.

It was extremely disappointing to see Daytona’s summer race get moved away from Independence Day. Although the “other Daytona race” is always going to be in the shadow of the Daytona 500, the 400-mile race had a unique history and prestige of its own. It always felt appropriate for NASCAR to, like so many Americans, head to the beach for a holiday weekend and celebrate the founding of the United States with a race at NASCAR’s signature track.

There was never a doubt that the Independence Day Daytona race was a special event. It was a race that a lot of drivers had circled on their calendars, one that all the teams put a little extra effort toward winning.

The TV networks treated it as special, too. Remember how, from 2001-2006, FOX and NBC used to swap the Daytona races with each other? It speaks to the significance of the summer race that the TV networks were willing to exchange it with the biggest race of the year on a rotating basis. One of the year’s biggest holiday weekends deserves a special race, and Daytona always delivered on and off the track.

But Daytona’s Fourth of July tradition came to an abrupt end in 2020 when the 400-mile race became the regular season finale. It was obvious why NASCAR made the switch. Placing a restrictor plate event, often the most unpredictable races of the year, at the end of the regular season increased the chances for a last-minute shakeup of the playoff field. Pack racing has greater potential to produce a surprise winner than any other type of racing in the Cup Series. With the “win and you’re in” playoff format, a regular season finale at Daytona maximizes the chances for the type of postseason-related drama which NASCAR has been chasing for nearly 20 years.

Yet when the race got moved away from Independence Day, it felt like Daytona’s summer race lost some of its luster. Wins at Daytona are still prized among NASCAR’s competitors, but now it feels like winning the summer race is more of a means to an end for the playoffs, rather than a significant accomplishment in of itself. Personally, the thought of the playoffs dimming Daytona’s significance makes me feel queasy.

If NASCAR must have a superspeedway race at the end of the regular season, why not Atlanta? Thanks to its new configuration, Atlanta has the potential to match all the thrills and surprises that Daytona provides. Sunday’s race nearly resulted in Corey LaJoie scoring his first Cup Series victory. Just imagine how compelling it would have been to see LaJoie fighting for his first win and passage to the playoffs in his last opportunity for the season. As long as Atlanta can provide superspeedway-style racing, it has all the wildcard potential of Daytona.

Moving Atlanta to the regular season finale would also give fans extra incentive to attend the race. Despite an exciting race earlier this year, the crowd at Atlanta for Sunday’s race was paltry. It is doubtless that the threat of rain and the assurances of high heat and humidity probably scared some fans away. But if NASCAR and Speedway Motorsports Inc. are going to justify two Cup Series races each year at Atlanta going forward, the track needs to draw a bigger crowd.

Holding Atlanta’s second race on a Saturday night at the end of the regular season should fix the attendance problem. Yes, NASCAR has been moving away from night races recently due to low TV ratings. But there is clearly a point where attendance at the track matters to the sanctioning body. Otherwise, why did Bristol Motor Speedway’s spring race become a dirt track event? Why have Richmond Raceway’s two dates bounced around from day to night and back again? Besides, if hosting the regular season finale cannot draw a good crowd to Atlanta, NASCAR needs to revisit the question of whether or not the track should get two races.

As for the Independence Day weekend race, NASCAR has not found a good solution since leaving Daytona. Racing at Indianapolis Motor Speedway around the Fourth of July lasted only one year, and Road America’s future on the Cup Series schedule remains up in the air. Road America is a historic circuit with lots of scenic beauty, and the local fans should get a lot of credit for strong attendance over the last two years. But in terms of the racing action, the two Cup races at Road America have mostly fallen flat. It was a good thing that last weekend’s race featured a compelling battle for the win between Tyler Reddick and Chase Elliott. Otherwise, the race would have been quite forgettable.

Road America may still find its niche in the NASCAR world, but it should not be held in conjunction with the Fourth of July. The racing that we saw last week was not a good representation of how much fun road racing in NASCAR can be. Additionally, as much as Road America is historic in itself, NASCAR has contributed very little to that history. NASCAR’s Independence Day race must be at a signature NASCAR track, and there is no track as critical to the identity of the sport as Daytona.

The playoffs were never a good enough excuse to move Daytona’s 400-mile race away from Independence Day weekend. Yet now that Atlanta has become the de facto third superspeedway, it would be a great place to hold the regular season finale. Longtime fans will remember how Atlanta hosted the final race of the entire season from 1987-2000. Moving Atlanta to the end of the regular season would be a fitting callback to that tradition. It would also help to increase attendance at the track and provide the unpredictability of superspeedway racing that NASCAR craves for its regular season finale. Daytona’s 400-mile race can thus return to Independence Day weekend.

NASCAR learned from its experience with Darlington Raceway and the Southern 500 not to mess around with traditional race dates. Hopefully, a similar course correction is in the works for Daytona’s summer race and 2023.

Atlanta as the final event is the same crap shoot as Daytona. However, Atlanta now deserves to be a fitting final “event” of the season. End the season with a demo derby just like the Daytona 500.

Exactly what it was. Crazy huh. Is this racing!

Listening to the shills in the booth saying how great the racing was made me sick and I wonder if that is what they truly believe.

They get paid by the word, regardless if it makes sense.

I’d be OK with a swap, so long as the 4th of July Daytona race would start around 11AM Daytona time to try to beat the usual afternoon rain showers. In agreement that if Atlanta attendance doesn’t pick up, going back to one race should be considered.

Bill B
Reply to  Robert B.

A snowball’s chance in hell that they will ever have a regularly scheduled race with a start time prior to 2PM (and that’s early).

Once upon a time, it was the final race of the season. Of course that was before NASAR expanded everywhere (often enough to tracks that don’t produce good races) and of course before the crapshoot championship nonsense.