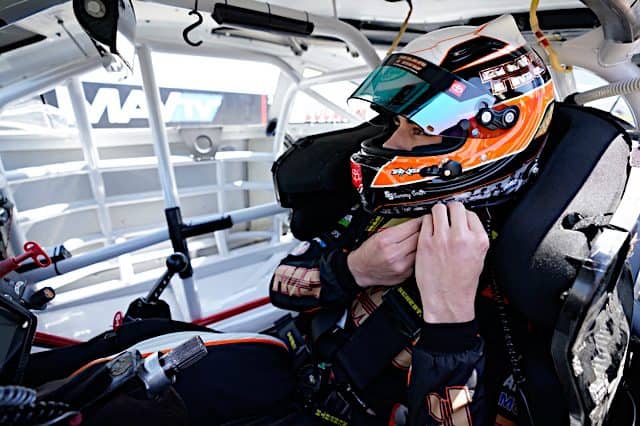 The second-ever ARCA Menards Series race at Mid-Ohio Sports Car Course was wild. Drivers qualified on a dry track, but Mother Nature had other plans for the Dawn 150.

Rain delayed the start of the race. When the green flag flew to begin the 42-lap event, it was still raining, forcing drivers to start with rain tires. By the time the competition caution flew on lap 22, the field was split on whether to pit for rain tires or slicks as the precipitation had stopped.

In the closing laps of the race, the sun came out as well as the caution flag. Some drivers pitted, with the Rev Racing duo incurring two-lap penalties following their stops. But ultimately, Taylor Gray won his second ARCA race of the season.

Rev driver Rajah Caruth leads his teammate Nick Sanchez by six points, while third-place Daniel Dye trails by eight points. Toni Breidinger and Greg Van Alst round out the top five in points, both more than 50 points behind Caruth.

Sammy Smith qualified second, led one lap and survived this wacky race to finish third. On a road course with ever-changing track conditions, Smith’s No. 18 Kyle Busch Motorsports Toyota was quite dirty after the race.

This is third place @sammysmithSS No. 18 @KBMteam Toyota. It’s quite dirty & beat up after the @ARCA_Racing race at @Mid_Ohio pic.twitter.com/DEvOc7P4KE

“They [his team] brought a good car here,” he continued. “The car didn’t switch from beginning to end, so I mean I never quite had it the whole time. It sucks.”

Smith is now 164 points behind Caruth, so he would need to gain at least 15 points per race on his competition to contend for the title. Up next for him is Pocono Raceway, where Ty Gibbs drove the No. 18 to victory lane in ARCA last year.

“Yeah, ready to go,” Smith said about heading to The Tricky Triangle. “See how we do.”

Caruth was more frustrated with his own on-track performance than his costly two-lap penalty for changing slicks during the last caution flag period.

“I just kept messing up,” he said post-race. “I couldn’t go wherever the grip was, slipping tires that were dry in the wet, kept screwing up so I can’t do that. We had a very solid car, I think, and I wish it would’ve stayed wet.”

For all his struggles at the 2.258-mile road course, Caruth finished ninth, the best of the championship three. His series-high number of laps completed has him still the points leader despite zero career ARCA wins.

Had a blast yesterday at @Mid_Ohio. Ended up 9th after climbing up to 2nd from 5th in the rain but overdrove & went off track multiple times. Points leader by 6. Onto Pocono. #teamchevy | #summerofseparation pic.twitter.com/m9SB94M9ye

Caruth made a bold prediction about Pocono, which will be his first race at that track: “Excuse my language, but I’m going to go win that bitch.”

At the competition caution, Sanchez’s crew chief Matt Bucher pitted him with four slicks. The gamble immediately paid dividends as Sanchez drove to the lead and led three laps, his first laps led at an ARCA road course race.

The “miscommunication,” as Sanchez described it, resulted in a two-lap penalty. Couple that with a last-lap spin and Sanchez finished 11th, his second straight finish outside the top 10.

“At the end of the day, it’s my bad and my screw-up on it,” Bucher said. This rule not only has been an ARCA penalty since 2020, it also was outright mentioned in the Mid-Ohio ARCA drivers meeting.

Correct! Additionally, changing tires from slick to slick outside of the break is also not allowed, unless it is a approved flat. Both of these were specifically mentioned in the drivers/spotters meeting today.

Sanchez’s finishing position was not indicative of his performance. In his second ARCA season, Sanchez has continually progressed. Sanchez finished fourth last year at Pocono. If his team avoids mistakes and he continues to improve, Sanchez will be a contender for the victory.

Like many of his competitors, Dye had an off-track excursion at Mid-Ohio.

A little visit to the beach for @danieldye43, but he's able to get it going back again just in time for the competition caution. @FS1 | @Mid_Ohio pic.twitter.com/0EAf3vfreH

But Dye rebounded to an eighth-place finish, best of the top three championship contenders, on a tough Friday (July 8) for ARCA drivers and teams alike.

Even with his horrendously unlucky mechanical failure at Berlin Raceway, Dye has three straight top 10s.

Dye has been third in the points for several races. If luck finally falls onto him, Dye will undoubtedly have his No. 43 GMS Racing Chevrolet up front, contending for victories.

Taylor Gray scored his third ARCA-sanctioned victory this year as he has now won at Phoenix Raceway, the ARCA Menards Series East race at Dover Motor Speedway and at Mid-Ohio. The 17-year-old Gray is tied for the most main ARCA wins, second-most top fives, and is 11th in the points despite not competing in four races.

Gray only led the final three laps at Mid-Ohio, and although he made the race-winning move by moving Kris Wright, Gray gained a race-high seven positions en route to victory.

The ARCA drivers have one race weekend off before they venture to Pocono. The day before the 80-lap race, there will be an optional five-hour practice session for ARCA drivers. Presumably, all contending teams will be there for that event as it will be more on-track experience ahead of the race at the 2.5-mile paved tri-oval. The race will begin on July 22 at 6:30 p.m. ET and air on FOX Sports 1.