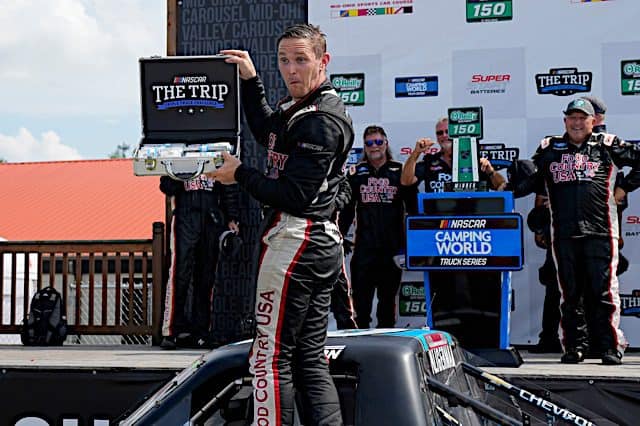 Did You Notice? … NASCAR Silly Season is heating up? So much talk revolves these days around Kyle Busch’s contract and if Corey LaJoie is in line for a larger opportunity. Then, 23XI Racing dropped a bomb Tuesday (July 12) with the announcement Tyler Reddick would join the team in 2024.

But as all those drivers work on their futures, there’s a built-in advantage: they already have jobs. Racing every week elevates them within a sponsorship-driven world that only offers so many chances.

The way modern NASCAR works is simple: you have a limited window to prove yourself. And if you fail? You’re sitting on the sidelines quicker than you can blink. It’s what makes the list below so special, the real gems of Silly Season buried behind the front pages. Each of these drivers have used part-time auditions, often underdog rides, to reposition themselves for the future. In nearly all cases, they’ve reconstructed what’s become a near-impossible second chance.

For each of these seven drivers, just putting themselves in the conversation for a full-time ride in 2023 is a victory in itself.

1) Parker Kligerman. LaJoie’s last-ditch effort to unseat Chase Elliott pushed Kligerman’s NASCAR Camping World Truck Series win off the front pages. But that shouldn’t detract from an incredible finish to the Mid-Ohio Sports Car Course race for Kligerman and the No. 75 Food Country USA team. Relive that last lap if you haven’t seen it, Kligerman holding on for dear life against 2022 point leader and three-time winner Zane Smith.

Keep in mind Kligerman won with an organization that has one full-time employee. It’s his second victory for Henderson Motorsports but this season has been by far their best: five top-10 finishes in eight starts with an average finish of 9.8. Sitting 16th in points despite missing seven races, Kligerman’s points-per-race would leave him second, behind only Smith, if he ran a full-time schedule.

Turning 32 in August, the NBC Sports NASCAR pit reporter knows it’s now-or-never to get back in the game. Almost nine years ago, he moved up to the NASCAR Cup Series too quickly with an underfunded team (Swan Racing) that dumped him, then got sold by the middle of the year. He’s been bouncing around with underdog rides and one-off opportunities ever since before finally getting it right at the No. 75.

A rumored deal with Richard Childress Racing for the NASCAR Xfinity Series fell apart for Kligerman the end of last season. Could Reddick moving on provide an opening to slide right in? My guess is more opportunities will open up beyond that (would JR Motorsports take another chance on a 30-something after how well it’s worked with Josh Berry and Justin Allgaier?)

In a worst-case scenario, you’d have to think sponsorship will materialize to take this Food Country team full-time in 2023, making them immediate title contenders. Whatever direction Kligerman goes, the future is bright.

2) Ryan Preece. Preece, currently the reserve driver at Stewart-Haas Racing, has been cutting his teeth in all three series after JTG Daugherty Racing shuttered his No. 37 team at the end of last season. The overall body of work is pretty impressive, including a 13th-place qualifying effort at Dover Motor Speedway for a Rick Ware Racing car that rarely sniffs the top 10. He was fifth in NXS at Charlotte Motor Speedway, driving a B.J. McLeod-owned No. 5 car that’s had three total top-five finishes in seven years running that division.

But it’s the Truck Series where Preece continues to look right at home. Winning at Nashville Superspeedway a second straight season, he’s got five top-10 finishes in six starts running a limited schedule for David Gilliland Racing. It’s a series where you could see the 31-year-old running the next decade, a Grant Enfinger or Matt Crafton type who would deliver Championship 4 appearances like clockwork.

A better ride may be in the works depending on what happens with Aric Almirola’s No. 10 in Cup. Either way, it’s hard to argue Preece’s strategy of dialing back with a top-tier organization has worked perfectly to put his career back on track.

3) Trevor Bayne. Bayne was left for dead after Roush Fenway Racing unceremoniously dumped him at the end of 2018. Ever since, the 2011 Daytona 500 winner has spent more time running his local coffee shop in Knoxville, Tenn. than competing on the racetrack. An eight-race Truck deal with Niece Motorsports went nowhere after 2020, leading Bayne and others to believe his racing future was behind the microphone. Indeed, he’s done well since being added to the FOX Sports NASCAR team.

But Bayne’s on-track future shouldn’t be discounted after a decision by Joe Gibbs Racing to take a chance on him in 2022. Part of a merry-go-round of drivers filling a seat in the No. 18 NXS Toyota, Bayne’s posted a pole position, no qualifying effort worse than sixth and 100 laps led in five starts. His average finish of 9.2 beats everyone else who’s been in this car; only John Hunter Nemechek has run up front more. Keep in mind Bayne’s experiencing this level of success after not racing NASCAR at all in two of the last three years.

What’s missing for him is a victory and that’s important: Bayne felt as many as three were needed to have a chance at a full comeback. That said, he’s had to fight from the back on multiple occasions (Phoenix Raceway and Nashville come to mind) where the No. 18 was arguably the fastest car. If he can grab one win before the year is out, it’ll make JGR harder to ignore him — especially if a decision is made to promote Ty Gibbs to Cup.

4) Marco Andretti. Boy, has Andretti impressed for a driver who looked washed up and disconnected from racing, period, at the end of 2020. Two years in SRX have been refreshing, reminding everyone of the potential he flashed in open-wheel racing over 15 years ago, posting a runner-up Indy 500 finish (and his first IndyCar win) at age 19.

The last three weeks, a guy with limited stock car experience has gone toe-to-toe with three-time Cup champion Tony Stewart, Ryan Newman and NASCAR Hall of Famer Bobby Labonte for the win on asphalt short tracks. While coming up short, his 90 laps led ranks second in this series and Andretti is in contention for the 2022 SRX championship. He already owns a main event win from last season (Slinger Speedway) at one of the more difficult short tracks in the United States.

That’s an impressive resume for a driver who I would argue came to SRX at a disadvantage, spending most of his career running a completely different style of car. Relaxed and at peace with how his career has shaken out, Andretti feels revitalized and has been talking openly about running the NASCAR Xfinity Series.

If you’re a team looking to make a splash (my first thought is well-run independent teams like the No. 26 owned by Sam Hunt or the No. 48 owned by Scott Borchetta) why wouldn’t you take a chance? The Andretti name comes with a built-in fan base and its own level of sponsorship support. At 35, Marco is more than capable of running several years at a high level and has proven to be a quick study.

5) Kaz Grala. Grala has fallen into the background this year after making the Daytona 500 with Floyd Mayweather’s team. He has an average finish of 24.7 in three races running The Money Team Racing’s No. 50, including a dreadful 13 laps off the pace at Charlotte. A seventh at Mid-Ohio was his first top 10 this season in 11 combined Xfinity and Truck starts.

It’s washed away a 2021 season that should have reminded everyone of Grala’s value. He ran sixth at Talladega Superspeedway for Kaulig Racing’s No. 16 Chevrolet before it was a full-time effort; he was second in a vastly underfunded No. 02 Truck Series team at Circuit of the Americas. Just 23 years old, there’s plenty of time to refine a talent that won the Daytona Truck race at age 18.

Ideally, TMT Racing would find the funding (and the parts) to build a Next Gen program that runs full-time. Grala would be the perfect candidate to help build that organization after years of paying his dues; let’s not forget, he took a RCR Cup Chevrolet to a top-10 finish just two years ago.

6) Jeffrey Earnhardt. Now 33 years old, Earnhardt has quietly put together a respectable full-time season with multiple programs. Seventh with Sam Hunt’s team at Nashville, he ran second at Talladega in a one-off with Richard Childress, running the No. 3 his grandfather made famous.

Earnhardt’s never gotten a full season in top-tier equipment to prove what he’s capable of doing. The one time he did, in 2019, there were three top-10 finishes in seven NXS starts before sponsorship from iK9 ran dry.

Like Andretti, having an Earnhardt with a competitive program can only be good for both the sport and the fan base. RCR may be willing to expand their horizons in the wake of the Reddick decision, or perhaps the No. 26 will take a chance on one driver full-time?

7) Corey Heim. I left Heim for last only because it feels a foregone conclusion he’ll run full-time in 2023 considering his age (19) and association with Kyle Busch Motorsports. I also wouldn’t call last year’s ARCA Series runner-up a driver needing a second chance.

It still shouldn’t detract from what Heim has done, winning twice in the No. 51 truck to outrank owner Kyle Busch (one win) this season. In the process, he’s shown an aggressive, win-or-bust mentality that should endear him to Kyle Busch Motorsports (and Toyota) for years to come. Gibbs isn’t the only ARCA star from 2021 whose future is bright… looks like the Gibbs-Heim rivalry could resurface sooner than you think.

I’d love to see Marco give stock cars a serious go. I’d also love to see RCR take a chance on Jefferey. Imagine those two names running near the front of a cup race at some point.

Put Parker in the 8 for next year and reassign Tyler to drive the hauler for the season.