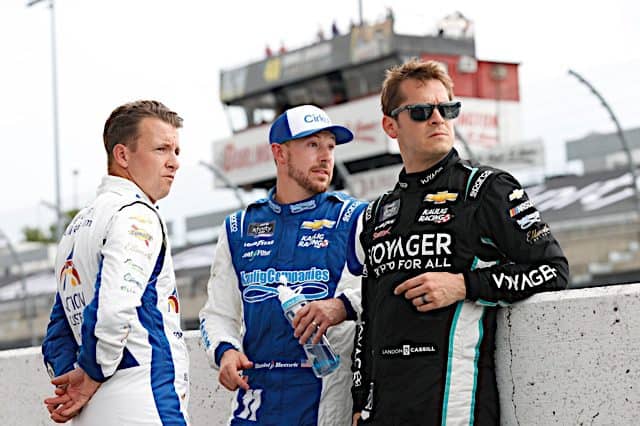 Motor racing is undoubtedly a sport full of highs and lows. Sometimes those highs can last for many seasons, and the lows can seem longer than the highs even when they aren’t.

Saturday’s Alsco 250 at Atlanta Motor Speedway was the season’s halfway point; in many ways, Kaulig’s 2022 is not going as many would have anticipated.

On October 11, 2021, Two days after failing to advance to the Round of 8 in the Xfinity Playoffs, Burton confirmed to Frontstretch that he wouldn’t be returning to the No. 10 Kaulig Chevrolet. About one month prior, sponsor Nutrien Ag Solutions had announced they would not return to sponsor Burton. The company later reversed this decision, but it was too late for Burton. He cited that other drivers had the funding, and he didn’t.

In June 2021, at Nashville Superspeedway, team owner Matt Kaulig announced the team purchased two charters from Spire Motorsports and that Haley would move from the organization’s No. 11 Xfinity Chevrolet to the team’s Cup Series entry in 2022.

Filling the voids left by Burton and Haley were Landon Cassill in the No. 10 and defending Xfinity champion Daniel Hemric in the No. 11. Allmendinger was also set to return to the No. 16 Xfinity entry for Kaulig and a part-time schedule in the team’s all-star car in Cup.

See also
5 Points to Ponder: Atlanta Brings the Heat in Temps and Tempers

The 2022 Xfinity lineup for Kaulig was lauded for being a potent one, as well as popular. Allmendinger’s return was a no-brainer for most. Hemric was fresh off his championship driving for Joe Gibbs Racing, and Cassill has been the driver to which many within NASCAR and fans alike have attributed the “if only he were in good equipment” saying.

However, the first half of 2022 has not met the expectations of many. It could be classified as a one step forward and two steps back half of racing.

It was bound to be challenging, but not impossible, for Allmendinger to improve his performance in the first half of 2022 compared to 2021. One year ago, he was second in points and had 11 top fives, 12 top 10s and 15 top 15s, including two wins. Halfway through this year, Allmendinger leads the standings and has scored 37 more points compared to one year ago. The number of top fives has fallen to seven, but he’s scored 15 top 10s and 15 top 15s and, again, has two victories. His season began with a streak of 12 straight top-10 finishes.

But the two steps back fall upon the Nos. 10 and 11 teams. Seventeen races into the 2021 season, Burton and Haley were sixth and seventh in points, respectively. Burton scored his first career Xfinity win at Talladega Superspeedway in the spring, and while his number of top fives was low (four), he was a frequent player in the top 10 with 10 finishes of 10th or better and had a total of 13 top-15 finishes. Additionally, he had 15 races where he finished on the lead lap.

Haley didn’t score a victory in the first 17 races of 2021 and missed one race (Dover) due to COVID-19 protocols, but he still managed to capture solid finishes. Through 16 races, he had 13 lead-lap finishes and 11 top 15s and 10 top 10s, but only a single top five. Haley’s three races in which he didn’t finish on the lead lap were ones he failed to finish. Teammates Allmendinger and Burton had one and zero DNFs, respectively.

Cassill, who took over for Burton, has fallen short in every category between the two seasons. He has led zero laps to Burton’s 22 and has two fewer lead lap finishes (13). Top fives are down one, top 10s are down two, and top 15s are down one. The real zinger is Cassill scored 103 fewer points than Burton and it’s landed him on the Xfinity Series playoff cut line. Currently, Cassill is 80 points above 13th in points.

Hemric, meanwhile, has reached the Championship 4 round of the NXS playoffs three times (2017, 2018 and 2021) simply for his consistency. Remember, he scored his first national victory in NASCAR in last year’s Xfinity season finale, which also won him the championship. By that time, Hemric was already signed to drive for Kaulig Racing in 2022, but consistency and maximizing his day are his strongest attributes.

While Hemric has scored two top fives compared to Haley’s one from one year ago, he has finished in the top 10 four fewer times (seven). Lead lap finishes are down one (12), but Hemric has matched Haley’s top 15s at 11. Like Cassill, Hemric is lower in points than one year ago. He has scored 45 fewer points, racing in all 17 races compared to Haley’s 16, and sits 10th in points, three positions worse than his predecessor.

In defense of Kaulig Racing, they expanded from a single-car, part-time entry in the Cup Series in 2021 to two full-time entries in 2022. That’s bound to place a strain on resources. Not only will monetary resources be tightened, but time and intellectual outlets will be as well.

An eye test will tell you that JR Motorsports and Joe Gibbs Racing are at least a step, maybe two, ahead of Kaulig in terms of performance in the Xfinity Series. Kaulig is a part of the Richard Childress Racing alliance circle. That group has three wins this season outside of Allmendinger’s wins at Circuit of the Americas and Portland International Raceway. Tyler Reddick scored the first win for Big Machine Racing at Texas Motor Speedway, while Austin Hill won the season opener at Daytona International Speedway and then at Atlanta Motor Speedway this past weekend.

Kaulig is missing that final piece or two for all three cars to be fighting for top fives and wins with ease, not just luck or a road course. Atlanta was only the fourth time this season all three Kaulig Chevrolets finished in the top 10. The most recent triple top 10 occurred six races ago at Darlington Raceway, almost two months in the rear-view mirror.

The good news for Kaulig is that when races go well for any of the three teams, the others finish well, too. Winning speed may not be the strong suit at this time, but the biggest issue is finding the consistency for Hemric and Cassill that Allmendinger has — the same consistency Hemric used to advance to the Championship 4 race in his three full-time seasons in Xfinity. Even Cassill needed to be consistent and capitalize on every opportunity he could when he drove for JD Motorsports in 2014 to a 12th-place finish in the standings and again last season to a 22nd-place standings finish.

Both Cassill and Hemric are capable of surpassing the success of their predecessors. Their paths to Kaulig are vastly different, but both have displayed determination in past seasons. But the spark must be found sooner rather than later in order to secure a spot in the playoffs, let alone contend for a championship, because the subsequent discussion will be if one or both return in 2023.