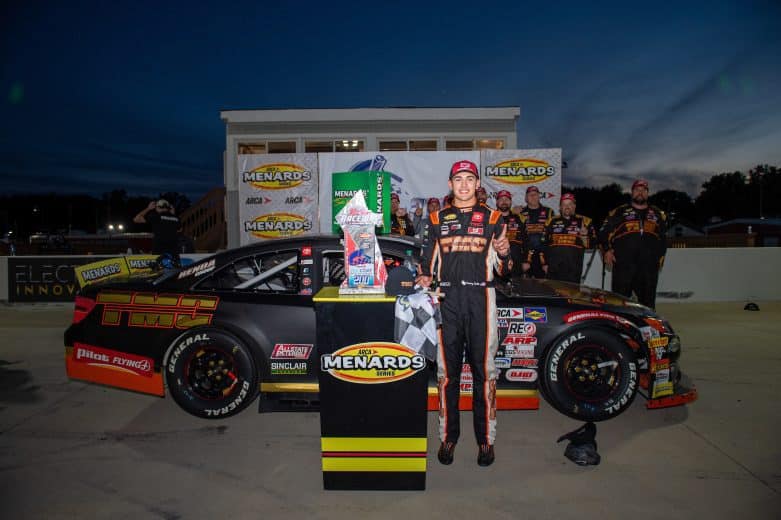 He won the 2021 ARCA Menards Series East championship and currently leads those standings with two races to go this season.

In the main ARCA series, Smith has won twice and has seven top-five and top-10 finishes. More impressively, Smith only has competed in eight main races. His career-worst ARCA finish was an 18th-place DNF in his series debut in 2021 at Iowa Speedway.

Yes, Smith has become a contender in all ARCA events. Smith has followed his ARCA predecessor Ty Gibbs in leading laps and being a regular force to be reckoned with at ARCA events. He’s atop the Frontstretch ARCA power rankings, too.

The question at hand, though, is how far can Smith climb in the ARCA point standings?

Because he turned 18 on June 4, Smith missed four main ARCA races due to being ineligible to compete at the bigger tracks of Daytona International Speedway, Talladega Superspeedway, Kansas Speedway and Charlotte Motor Speedway. In addition, Smith missed the 50-point bonus for not competing in four of the first five events of the ARCA season.

Currently, Smith is ninth in points, trailing points leader Rajah Caruth by 164 points. There are 11 races to go this ARCA season, so Smith would need to gain at least 15 points per race on his fellow competitors to win the ARCA title.

While not mathematically impossible, it is improbable for two main reasons.

First, the top three – Caruth, Nick Sanchez and Daniel Dye – have a combined two DNFs. Those three drivers have fast Chevrolets. Smith not only would need to maintain his 2.0 average finishing position, gaining more points than them, but those three would all need to have at least two or three ARCA events in which they finished in the bottom five finishing positions. Based on their performances thus far, that’s incredibly implausible.

In addition to Caruth, Sanchez and Dye all running well, Smith’s championship odds are diminished by the ARCA car counts.

Only five of the nine ARCA events this season have featured at least 25 competitors. So, if there are only 25 cars competing in an ARCA event, if Smith finishes first and his championship three contenders finish 23rd, 24th, and 25th, then he only gains 22-24 points, respectively, on each driver. Again, based on Caruth, Sanchez, and Dye’s speed this season, Smith cannot gain enough points to pass them in the championship standings.

Smith and his Kyle Busch Motorsports team may dream of accomplishing the herculean task, but they will not win the main ARCA title this season.

Because Tinkle did not compete at Mid-Ohio Sports Car Course, he will not receive the 50-point bonus for competing in ARCA races Nos. 6-10. Therefore, Sammy Smith will pass Tinkle in the points after Pocono Raceway.

Brad Smith has two career top-10 finishes, less than Sammy Smith. Depending on the Pocono field size, Sammy Smith might pass Brad Smith in the points after that ARCA event. If not, Sammy will certainly pass Brad in the battle of the Smiths after ARCA has its next race at Lucas Oil Indianapolis Raceway Park.

Toni Breidinger, Greg Van Alst and Amber Balcaen are fourth-sixth, respectively, in points and are 106, 103, and 93 points, respectively, ahead of him. Yet can Smith catch them?

It will be tough, but Smith is up to the challenge.

Smith needs to gain at least 10 points per race more so than Breidinger, Van Alst and Balcaen. Considering his average finishing position is 10 spots better than the trio, not to mention bonus points earned via winning the pole, leading laps, and winning races, Smith can climb up to fourth place in the championship standings.

Super proud of my entire @KBMteam for putting together such a strong car at @elkospeedway last night. Awesome to go back-to-back, and great to take @PeterbiltGroup to victory lane! Win #5🏁 pic.twitter.com/DzlnOtyWUn

Sammy Smith is unbelievably talented. He has won ARCA-sanctioned races and he seems destined to ascend the NASCAR ladder, beginning with his part-time NASCAR Xfinity Series slate.

As ARCA still has to visit unique tracks such as its two dirt tracks, Pocono, its second road course of Watkins Glen International, etc., Smith will turn his first laps at these courses. But so will several of his fellow competitors, and that ought to make his rise through the ARCA point standings one to watch as this ARCA season nears its halfway point.