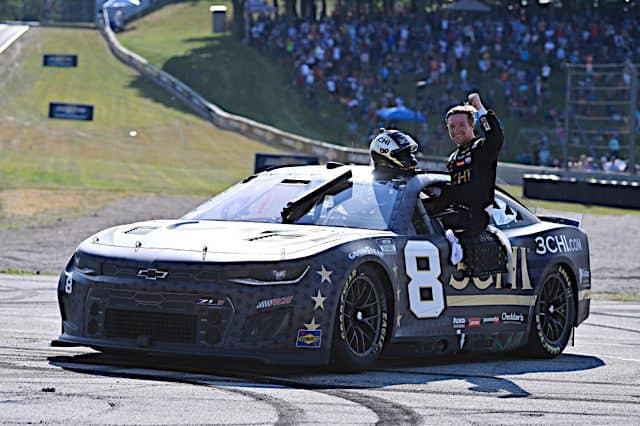 The first NASCAR silly season bomb dropped on Tuesday (July 12) afternoon and it was a big one.

Tyler Reddick, considered by many as one of the top young drivers in the sport, is switching teams after the 2023 NASCAR Cup Series season. Reddick will join the Denny Hamlin and Michael Jordan-owned 23XI Racing for the 2024 season.

The news came as a surprise to many, as many expected Reddick to remain at his current team, Richard Childress Racing for the near future. Even RCR was taken aback at the announcement.

Whatever your feelings are on the change, one thing is for sure: Reddick is out and RCR has to find a replacement for the 2024 season.

But who is in a better position moving forward?

Reddick with 23XI Racing or Richard Childress Racing? Michael Finley and Vito Pugliese debate who got the better deal for 2024.

I’m not going to sugarcoat things: it was definitely a loss for RCR to lose Reddick.

And if you’re Hamlin with a chance to sign Reddick, you sign him every time. Reddick is a special driver that has the potential to be a future Cup champion. But let’s not count out RCR just yet.

RCR is going to have an open seat for 2024, meaning it is almost certainly going to be able to get any driver who gets hot in the lower divisions. It’s got the inside track on Sheldon Creed and Austin Hill who drive the organization’s NASCAR Xfinity Series cars, and could very easily pursue names such as Noah Gragson, Justin Allgaier, or even somebody more off the radar right now like Zane Smith.

It may not be a complete disaster if that talent can pan out. And if they don’t? Childress can always just coat hanger them off the stage like he did Daniel Hemric.

It’s also beyond clear now that Austin Dillon is the undisputed No. 1 driver at RCR, instead of potentially playing second fiddle to Reddick. Of the two Dillon brothers and the hate they generate, as a driver, Austin has always been pretty unfairly linked to his brother. Austin Dillon has a better average finish than Reddick has this year and has a strong enough resume where it’s hard to argue he isn’t Cup caliber.

The other big question here is going to be how does Reddick even fit into 23XI Racing. If he’s replacing Kurt Busch, that’s a big loss because Busch only makes the people around him better now, and even last year was running pretty darn even to Ross Chastain when the two were in the same equipment. Busch brings a veteran presence to the organization and is a huge benefit to a younger driver like Bubba Wallace. Reddick doesn’t bring the same knowledge Busch does.

If a new car is being opened up for him, that’s another new set of problems. First and foremost, charter prices are going to skyrocket the second NASCAR announces the new media rights deals, because even if the percentages remain the same, everybody is going to be making a lot more money going forward.

So suddenly, in addition to the fortune Hamlin and co. probably spent to pry Reddick from RCR, they’ll also be spending a lot of money and resources to build up a third team. Every year of 23XI has had growing pains so far, with both Busch and Wallace showing plenty of speed this year but not being able to capitalize on that speed because of a multitude of problems.

And let’s not even bring up the pit crews at this point; JGR is struggling to field six pit crews in every race, and now they’re going to have a seventh?

Meanwhile, RCR has over 50 years of experience under its wings every time they wheel its car out to pit road. And it’s found a lot of speed ever since aligning their engine program with Hendrick Motorsports. It has way more data than before and it is collecting on engines every single race now than Toyota does, and that will play into its structural advantage.

People remember Kevin Harvick leaving RCR and immediately winning a Cup championship, but people don’t remember that Ryan Newman was two turns short of what would have been RCR’s lone championship since 1994 in that very title fight. Don’t count out the proven commodity against the young upstart. – Michael Finley

The Tuesday announcement that Reddick is moving from RCR to Hamlin’s 23XI team in 2024 was as big of a shock as we’ve had in the Cup Series since Brad Keselowski decided to become part owner of Roush Fenway Racing last season.

Having just won his first career race two weeks earlier at Road America – which coincided with Richard Childress Racing picking up his 2023 option year – it was quite a turn of events for everyone in Welcome, North Carolina. While the expected speculation of who would ultimately be in the No. 8 car for 2024 (and 2023 for that matter) spun up quickly, it led to the obvious larger question: Who is the ultimate benefactor from this move?

From the onset, it became clear that it likely isn’t RCR. Its statement on the matter ended with, “timing of this announcement could not be any worse.”

Fair enough, but then why is he essentially on a year-to-year contract then, in the midst of a new car and new track renaissance?

RCR appeared to be caught flat-footed, and while Chevrolet is not at a talent deficit in the Cup Series or Xfinity, Reddick is a championship-winning driver that is clearly capable of becoming an absolute force when in equipment comparable to Hendrick, Team Penske, or Joe Gibbs Racing.

Looking at the other car in the stable, awash in Bass Pro Sponsorship as it has been for the last decade in each series it’s been in, one would think there is some sort of lunar material that RC could have offered his driver that won what should have been his second race of the season.

That isn’t to say 23XI is a ticket punch to instant success either.

See also
Did You Notice?: Kligerman or Bust? 7 Drivers Who Should Be Running NASCAR Full Time in 2023

While Kurt Busch has shown solid speed most of the season and has won a race, it has suffered its share of poor performances and crashes. The No. 23 car in 23XI has fared even worse.

Bubba Wallace has had a well-documented litany of pit related issues this year, which resulted in a crew shake up with the No. 20 of Christopher Bell this past weekend. The No. 23 has not been on par with the other Toyotas for most of the season, and when they have had some momentum building for a good finish, a pit incident ends up burying them for the weekend.

Granted this is still season one with the new car and there is more development work to do. But one has to wonder where the bulk of the resources will be focused on once Joe Gibbs Racing ascends his grandson, Ty Gibbs, to the seat of what will presumably be either the No. 18 or No. 19 car in 2024. And if Reddick is poised to replace Kurt Busch in that season, is Reddick considered veteran material along with Wallace at that point? So far they have the same number of wins – and the team will be in only its fourth season when Reddick arrives.

But if we’re looking at potential for success, 23XI is clearly better positioned to make the most of the transaction.

While Richard Childress Racing obviously has a legacy of success and a legion of loyal fans from the glory days of Dale Earnhardt, it has morphed into the Chevrolet version of RFK Racing in recent years. While competitive on superspeedways or more recently dirt, it is not a threat to pass cars through the field and contend for wins. The organization is a force in the Xfinity Series with Hill exceeding expectations already in his first year, but there’s a definite gap in performance for the organization between the lower tier series and Cup.

Austin Dillon is a favorite target of detractors, but is it really his fault? In the last 10 years, they’ve collectively won 10 races; four of which were from Harvick in 2012.

In the Chevrolet pecking order, RCR is obviously taking a backseat to Hendrick Motorsports – and with the arrival of Trackhouse Racing, it is effectively third in line. Toyota, on the other hand, is one large entity of Joe Gibbs Racing and 23XI – the six-car team that’s two organizations – but the engines, crews and cars are for the most part, a JGR output.

With Truex returning for what is potentially his final year there, Kyle Busch is still a question mark, although Ty Gibbs is occupying one of those chairs if one of those drivers should leave. Despite all that, there’s a better opportunity to flourish with the factory TRD conglomerate, that has an involved driver and the backing of resources and sponsorship afforded through Michael Jordan and the Jordan brand.

This isn’t to say RCR will flounder. Gragson was quick to tweet a smiley emoji following the announcement (his existing Bass Pro Shops sponsorship making the transition a layup), and there are a number of existing Cup drivers who would fit the RCR mold in Erik Jones and Corey LaJoie.

That said, I don’t see RCR making much of a jump from where it has been the last few years. The No. 8 car is fast becoming a revolving door of talent, another analogous comparison to what happened to RFK Racing during the 2010s. Hemric was there for one season and was dismissed – ultimately winning the 2021 Xfinity Championship with Toyota. Newman won a single race there after five seasons and exited.

In the end, it’s another power move by 23XI Racing; having landed two drivers awash in sponsorship between Wallace and Kurt Busch, now it’s added a talent who may be every bit the equal of Kyle Larson if put in comparable equipment. We’ll just have to wait a couple of years to find out. – Vito Pugliese

While their stats are similar (except the win) look at laps led. 278 to 2. That tells you only one is running up front. You also have to wonder if RCR is being 50/50 with the 3 and 8 or is the 8 doing great why not getting full resources? Yes RCR wants the 8 to succeed but also needs the 3 up there too.

Is this a trick question?

Reddick and Larson comparison, really ! 26 year old versus 29 year old. I know you said comparable cars but come on it’s way to early to even think that don’t you think. The thing that sticks out to me the most is that RCR had Reddick on a year to year contract. Huge mistake on someone’s part. Would that be papa Dillon !!!