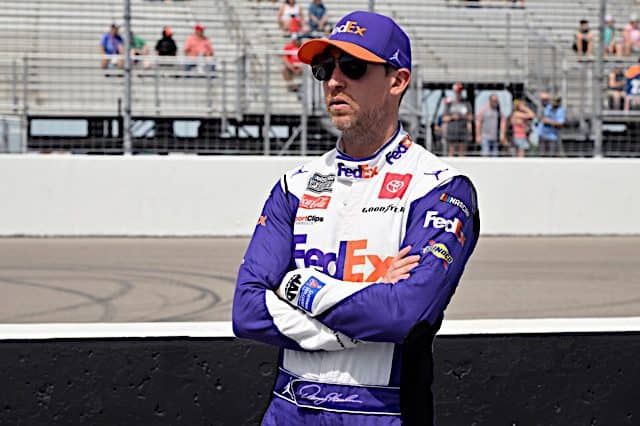 When, if at all, do you expect Ross Chastain to receive some on-track payback from Denny Hamlin in the NASCAR Cup Series?

Michael Nebbia: Richmond Raceway. It’s the perfect storm – next to last race before the playoffs, a short track and Denny Hamlin’s home track. If Hamlin gets his revenge on Ross Chastain in front of his hometown fans, just imagine the uproar. Sure, there may be some sort of penalty coming but if you were Hamlin, it would be worth it.

Andrew Stoddard: It will be at one of the two short tracks on the playoff schedule, Bristol Motor Speedway or Martinsville Speedway. There is a history of drivers getting payback at short tracks in the playoff era, most notably Matt Kenseth taking out Joey Logano at the 2015 Martinsville race. Short tracks are easier places to get drivers back because it could be covered up as being a product of short track racing, as Hamlin said in his best Logano impression after their Martinsville dust-up in 2019. Also, short tracks are less dangerous places to get another driver back, as opposed to the higher speeds of 1.5-mile tracks like Las Vegas Motor Speedway or the pack racing at Talladega Superspeedway. I am sure Hamlin will take these factors into account when getting back at Chastain.

Stephen Stumpf: If Hamlin decides to set the record straight with Chastain, retaliation will come in the playoffs. Chastain has now ruined Hamlin’s race twice in the last month, and if Hamlin wants to send a message, doing it in the playoffs would be hitting Chastain where it hurts the most. Hamlin is far from the only one to take issue with Chastain’s racing this season, and that is why today was not the last we’ll see of these two. Chastain also needs to be careful and not make more enemies in the regular season, because he is a championship favorite and one of the fastest drivers this season. The final 10 races will already be hard enough with the number of drivers who will not play nice with him.

Should NASCAR put in a tampering rule to prevent drivers from bolting on a team with more than a year left in their contract?

Stoddard: Yes. Based on Richard Childress Racing’s response to Tyler Reddick‘s announcement this week, it looks like 23XI Racing did not reach out to it beforehand. While it is understandable that Reddick and 23XI want to do what is best for them, it does put RCR and the No. 8 team in a prolonged lame-duck situation with Reddick, which is unfair. As for the punishment, a tampering example from the NFL comes to mind. In 2016, the Kansas City Chiefs were punished for tampering in its free agency talks with wide receiver Jeremy Maclin, and its punishment was a $300,000 fine and the loss of two draft picks, one in the third round and one in the sixth round. So whatever is the NASCAR equivalent of that punishment, whether it be a fine and/or the loss of driver or owner points, would be suitable for a new tampering rule.

Stumpf: This is not the first time that a contract has been signed with a new team more than a year in advance. In the middle of 2010, while driving for Richard Petty Motorsports, Kasey Kahne signed a contract with Hendrick for 2012. Toward the end of 2012, while racing for RCR, Kevin Harvick signed a contract with Stewart-Haas Racing for 2014. While Kahne abruptly left RPM toward the end of the 2010 season for Red Bull Racing, Harvick won four races and finished third in points for RCR in a lame-duck 2013 season. If Reddick, RCR and the sponsors continue to be on good terms for 2023 and make it their mission to compete for wins, I don’t see a problem with teams signing drivers a year in advance. But if everything falls apart and Reddick makes an early exit from the team, a tampering rule should be on the table for 2024 and beyond.

Jack Swansey: I’ll admit I’m not all too familiar with sports that aren’t on wheels, but it’s my understanding that these tampering rules are primarily to avoid the appearance of impropriety. If players could be pre-contracted to rival teams, there would be whispers of throwing games, which could damage a league’s reputation — and worse, draw the scrutiny of the federal government. The structure of NASCAR, a competition among individual drivers, makes those concerns irrelevant. Even if Reddick were to start losing on purpose, that wouldn’t necessarily make 23XI look better. Elsewhere in the racing world, it’s much of the same. Formula 1 requires so-called gardening leave only for technical personnel. Its concern is with corporate espionage, something that the 2021 Brad Keselowski leave-the-lame-duck-out-of-competition-meetings move nips in the bud in NASCAR. Plus, given how often deals fall through and drivers’ contracts are canceled with no notice through no fault of their own, I’m not exactly one to shout. “think of the poor team owners!” RCR is well within its rights to be upset with Reddick for surprising it, but I’m sure the environment in the No. 8 camp over the next year-and-a-half will be its own punishment on both sides. It’s racing. Them’s the breaks.

Anthony Damcott: A tampering rule isn’t necessary. The announcement gives RCR a year-and-a-half to find a sponsor-approved replacement driver (or someone who can bring even more sponsorship). It’s better than a driver suddenly jumping ship or retiring at the end of a season and leaving teams scrambling to figure out what to do with their program six weeks before the season starts. It’s also not like teams haven’t done this to drivers in the past. In 2020, Wood Brothers Racing announced  it was going to replace Matt DiBenedetto with Austin Cindric for 2022 (before Cindric took over the No. 2 and Harrison Burton ended up being the driver of the No. 21). DiBenedetto had every reason to tank in 2021 to stick it to WBR and didn’t. The distraction is not the announcement of the deal — the distraction will be how much RCR focuses more on that announcement instead of its season. The only issue I have with the whole ordeal is that Reddick seemingly didn’t inform RCR of his decision; that could have been handled a bit more professionally. Other than that, this situation may be a little bit overblown.

Is the Cup race at New Hampshire Motor Speedway Kevin Harvick’s best shot at winning his way into the playoffs?

Mike Neff: Of the races left, it would certainly look that way. He has three wins there in the last 10 races. The team has shown flashes with this new car. This weekend would be a great time to catch lightning in a bottle.

Swansey: Kevin Harvick and Stewart-Haas Racing’s recent run of success at New Hampshire makes it his best option to win his way into the playoffs, but Harvick shouldn’t be counted out anywhere between now and Daytona International Speedway. Harvick has won previously at all tracks between now and the playoffs (including Richmond, where he finished second earlier this year, and Michigan International Speedway, where he’s won four times since 2018), with the exception of the Indianapolis Motor Speedway road course (he’s won twice on the oval). He is also finally starting to build a little momentum, having come home top 10 in four of the last six races, including two top fives.

Damcott: I wouldn’t say it’s Harvick’s absolute best shot, but it’s one that the No. 4 team has to have circled on the calendar. He ran really well there last year and ultimately finished sixth, so there’s no real reason why he couldn’t be a threat to win again. I wouldn’t say that this is his last best shot to make the playoffs, but it’s definitely one that he has to have thought about since Reddick’s win bumped him from the playoff grid.

Luken Glover: It definitely should be viewed that way. Michigan would be one that, based on past history, could immediately be brought up. However, the speed from SHR and the Fords in general on intermediates has been underwhelming, with the exception of Ryan Blaney. The tracks 1 mile or shorter in length have been Ford’s best track type this season. Harvick showed strength at both Phoenix Raceway and Richmond, as well as Nashville Superspeedway. He won there in 2020 and finished sixth in 2021. Richmond is a close second, but the time is now for Harvick.

If Marco Andretti competes in the Xfinity Series, would he be an immediate contender?

Neff: It would not seem that way based on his history. He has two wins in 250 NTT IndyCar Series starts. He was good in Indy Lights, but that doesn’t seem to transfer to Xfinity. Not a very good bet based on history.

Glover: Immediate success is slim to none. Marco Andretti did not have the greatest success in IndyCar, and it is a big difference going to the open-wheel cars there to the heavy stock cars of NASCAR. Drivers such as Sage Karam and Santino Ferrucci have dipped their toes in the Xfinity Series, and while they have progressed, it was no overnight success for them. Andretti has impressed in the Camping World SRX Series, but Xfinity is a different animal.

Nebbia: It would all depend on what kind of team with which he ends up. If he ends up somewhere like Joe Gibbs Racing or JR Motorsports, he’d be a contender. He’d even be a decent contender at Kaulig Racing. But he’d have to learn from the pitfalls of the last open-wheel star to try their hand at NASCAR – Danica Patrick – and not repeat those mistakes.

Who will pay back Hamlin before he has a chance at Chastain?

I know that people have to have something to write about. But don’t you think you’ve ridden this Hamlin Chastain horse long enough.

Seems like I remember reading something about someone W/O sin casting the first stone. Hamlin is far from qualified to cast that stone. He’s got bigger fish to fry, & needs to move on, & third parties need to quit stirring it up.

Stephen Stumpf,
Don’t you think by paying back Chastain in the playoffs, Hamlin would jeopardize his own chances of winning the championship? Don’t you think Chastain might do the same? I would.

I suppose if were a case where Chastain was pushing it and Denny had a choice of lifting or wrecking him, that would be one thing, but if it’s blatant then Hamlin would risk both payback from Chastain and possibly a penalty? You know how NASCAR warns drivers about F-ing with the playoffs. Blatantly taking a contender out in the playoffs undermines the legitimacy of the whole sport.

If he wants to get even I’d say it would have to be before the playoffs or next season. Unless both are out of the playoffs in an early round. Then it’s open season.

I can’t remember right now if Joey owes Hamlin a payback or vice versa. There are more than a few that owe Hamlin who aren’t going to be in the playoffs. If I was one of them and got the chance on a short track, it would be very hard to prove intention.

Media, please stop with this weekly soap opera. NASCAR should step in and tell Hamlin/Chastain they will park them.