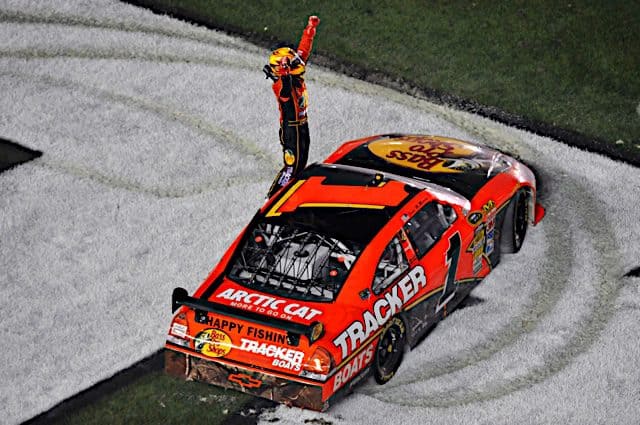 This past week has brought us a couple of NASCAR bombshells in terms of racing news, starting with Tuesday’s (July 12) news that Tyler Reddick is making the move from Richard Childress Racing to 23XI Racing in the NASCAR Cup Series for 2024 and beyond.

The unexpected announcement — presented during a presumably run-of-the-mill press conference by Reddick’s future owner Denny Hamlin and a comical pop-up in the availability by Reddick — sent shockwaves through the silly season-verse and rumors abounded about other drivers, 23XI’s stable and more.

So, with all that chaos in our rear-view mirrors, I thought I’d take a look at some of the biggest team switches to occur since 2000 and highlight some of the most successful instances of jumping from one ship to another.

One of the biggest stories this century was the sport’s most popular driver leaving his father’s team for a Chevrolet competitor.

Earnhardt Jr. had a pretty solid debut with HMS, all things considered: one win, 10 top fives, 16 top 10s. Gordon didn’t win, but did record double-digit top fives and 10s while Johnson won another title while racking up seven wins and 22 top 10s.

Teammate Casey Mears, who didn’t have the greatest of seasons in 2008, aside, Earnhardt Jr. stacked up pretty well to his compatriots.

Then came the next three years!

That trio of season yielded nine top fives and 25 top 10s across all three. Top fives between the seasons numbered two, three and four, respectively, while Earnhardt Jr. didn’t crack double-digit top 10s in either 2009 or 2010.

He did somewhat return to form in 2012, finally winning after a four-year victory drought and scoring 20 top 10s. He kept that pace over the next few years, winning four races in 2014 and three in 2015, but those lackluster few years made for a massive disappointment after his success at DEI and first season with HMS.

The owner of one of the most underdog wins ever, Jamie McMurray’s first career triumph came in his second Cup start while subbing for an injured Sterling Marlin with Chip Ganassi Racing.

Ganassi retained the Joplin, Mo., native through 2005, after which McMurray joined Roush Racing in the team’s No. 26. McMurray was moderately successful, scoring a couple superspeedway wins, but returned to Ganassi to start the 2010s and began it in the best fashion possible.

McMurray later won the fall Talladega Superspeedway event in 2013 and the 2014 All-Star Race, but none of the following eight full-time seasons rivaled 2010. Most memorably, the No. 1 barrel-rolled during practice at Talladega in 2018.

Carl Edwards had put together some masterpiece-level seasons while with Roush, including a nine-win campaign in 2008, four wins in his first full-time season in 2005 and two runner-up finishes in the standings during his Ford tenure.

For 2015, Edwards journeyed to Toyota and Gibbs, though he only spent two seasons there before his sudden retirement following the 2016 season. Despite the two years with JGR incomparable to some of his most successful seasons with Roush, he had 15 or more top 10s, two or more wins and a top-five points effort in each of the two years with Gibbs.

One of the oddities within this category, Kahne spent several years with Richard Petty Motorsports before announcing his move to Hendrick for the 2012 season. That reveal came in early 2010, and after being released from his contract before the end of the season Kahne hopped in Red Bull Racing’s No. 83 for the final five races of the year and full-time the next season (where he and teammate Brian Vickers ran some of my personal all-time favorite primary paint schemes).

2011 wasn’t a bad year for Kahne, as he scored 15 top 10s and a win in the penultimate race, but Red Bull was an absolute upgrade from zero victories and seven top 10s the year before at RPM.

The win was Red Bull’s final in Cup, and with Vickers scoring just three top 10s, it wasn’t what the Toyota stable was hoping for in their last year of existence. It’s not that Kahne had a bad year, but he wasn’t exactly a factor in many races.

Cut to 2012, where Kahne improved in every element: two wins, including the famed Coca-Cola 600 at Charlotte Motor Speedway, plus double-digit top fives and almost 20 top 10s. He also finished fourth in the standings in his first year with the No. 5 team, tacking on four more wins over the coming years (two of them the very next season).

Arguably one of the more successful transition stories and one of the few to feature championships of equal caliber with two different teams, Tony Stewart‘s foray into becoming an owner-driver came into being in 2009 with the formation of SHR.

The first year saw four wins for the No. 14, followed by two in 2010, but 2011 showcased five wins and a championship for Stewart. Quiet for most of the regular season, the Chevrolet stable caught fire, and Stewart and Edwards were neck-and-neck for the title almost the entire way. Stewart came out on top, the five wins propelling him to the crown via tiebreaker.

Ergo, the NASCAR world sees the younger Busch brother head to Gibbs. Talk about a debut with a new team: eight wins, 1,673 laps led and an average finish of 12.5, all career highs. He finished 10th in points, but it was a win total he didn’t come close to or match until a decade later.

It was a rebirth and rejuvenation for Busch and his career; the new partnership helped him settle into his equipment, win more races and, as mentioned in the Rowdy documentary, allowed Busch to be himself without much interference. Sponsor Mars essentially said as much and that they’d “pick up the pieces” afterward.

After a four-win 2013 campaign with RCR, Kevin Harvick drifted over to Stewart’s recently created team to make a run at the title himself.

The result was five wins, more than 2,000 laps led and a title in the very first season of the NASCAR playoffs.

Since the move, Harvick has scored 35 wins with SHR, but he hasn’t won a race in almost two years. Up through the fall of 2020, the No. 4 team looked unstoppable and on track for driver and team’s second title, but that crown has yet to sit upon Harvick’s head again.

Few teams have experienced as much of a turnaround as Furniture Row Racing did with Martin Truex Jr. Having fielded Regan Smith, Kenny Wallace, Kurt Busch and others during its first years of existence, the Colorado-based team brought in Truex for 2014.

It took a year-and-a-half, maybe two, for the team to find its stride, but once it did, the eventual Toyota stable became a threat every single week. One win in 2015, four in 2016 and then eight in 2017, career highs for everyone involved, plus the 2017 championship, made the Truex move a huge success for driver and team.

Kyle Larson: CGR to Hendrick for 2021

The most recent massively successful move, Larson was dropped from Ganassi after using a racial slur during an iRacing event in spring 2020. Sidelined for the rest of that season, the California native was eventually picked up by Hendrick to fill the No. 5 car.

What came next were utter dominance, including a feat rarely seen in Cup competition with a 10-win season, as well as the 2021 championship. Though 2022 hasn’t been as multi-win-friendly for any Cup driver, Larson does have a victory and a chance to defend his title.

A few didn’t quite make the detailed list, including Brad Keselowski, Dale Jarrett and Joey Logano. Logano’s move to Penske from Gibbs didn’t yield immediate success, with just one win in ’13, but the next two years featured a combined 11 wins and an eventual championship in 2018.

Moving to Gibbs to replace Logano was Matt Kenseth, who enjoyed a seven-win season in his Toyota debut, finishing second in the standings.

Logano’s longtime Penske stablemate Keselowski, meanwhile, won a title in just his third year with the then-Dodge team and raced there for nearly a decade more, recently moving to Roush to rebrand the team as RFK Racing for 2022. Keselowski has had a nightmare season so far, sitting 30th in points as the playoffs near.

Finally, one of the more down notes I found was Dale Jarrett, who departed Robert Yates Racing hopeful for greener pastures with MWR and then-newcomer manufacturer Toyota. The result in a 24-race 2007 and a five-race 2008? A whopping zero top fives, 10s and wins, three laps led and just three finishes inside the top 20.