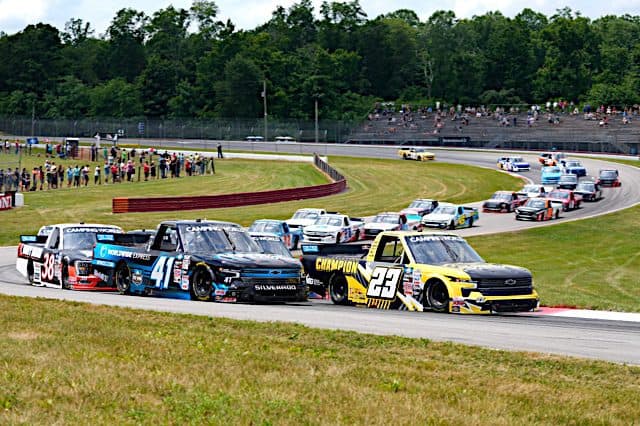 While the NASCAR Cup and Xfinity series still have a handful of races before their playoff fields are set, the Camping World Truck Series takes this weekend off and locks in its playoff field next weekend at Pocono Raceway.

From there, the field will run its seven playoff races over the following 15 weeks. Despite having 12 different winners in the first 15 races this season, just five drivers have locked themselves into the championship battle by winning.

Zane Smith took the victory at Daytona International Speedway to open the season, and Chandler Smith followed that up with a win at Las Vegas Motor Speedway a couple weeks later. After that, it wasn’t until Ben Rhodes won on Bristol Motor Speedway’s dirt configuration a month later to become the third driver locked into the playoffs on wins. Since then, John Hunter Nemechek and Stewart Friesen each posted wins to guarantee their spots in the championship battle.

Interestingly enough, the last six races since Friesen’s victory at Texas Motor Speedway have been won by drivers who aren’t eligible to run for the championship in the Truck Series.

Meanwhile, even though he hasn’t visited victory lane this season, Ty Majeski has quietly put together a strong season. He’s only led 35 laps all season, but has seven top fives and nine top 10s in 15 races. In his first full-time season, that consistency was enough for the No. 66 team to lock itself into the playoffs following a 12th-place finish at Mid-Ohio Sports Car Course last weekend.

Additionally, winless drivers Carson Hocevar and Christian Eckes have locked themselves in, too. All of that means there are still two spots up for grabs, and anyone inside the top 20 in points could technically win their way into the playoffs.

Of course there are some drivers that you wouldn’t expect to find victory lane that you can probably take out of that conversation. But there are also drivers like Grant Enfinger, Matt Crafton and Derek Kraus, all of whom have been locked out of victory lane thus far that could win and make things interesting.

First of all, assuming there’s a repeat winner or someone amongst Majeski, Eckes, Hocevar, Enfinger or Crafton wins, Enfinger would lock in with just eight points. And even if a driver lower in the standings were to win, Enfinger would only need 27 points to guarantee his shot at racing for the championship. So, even though they’re not locked in, the No. 23 team is sitting in a pretty comfortable position.

Enfinger, Crafton, Kraus, Tyler Ankrum, Matt DiBenedetto, Tanner Gray, Chase Purdy, Colby Howard and Timmy Hill would all clinch their spot in the playoffs with a win, regardless of what anyone else does. I’m sure you could point to a few of those drivers that you wouldn’t even consider putting in the threat to win category. But with that said, a few of those drivers have also shown they’re capable if the situation is right.

In reality, Pocono has been pretty tame over the years, barring a scary crash here and there. Those above the cut line (Enfinger and Crafton) are sitting in a good spot if the season continues the way it has been.

But neither team has the luxury of letting their guards down coming into the final race of the regular season.