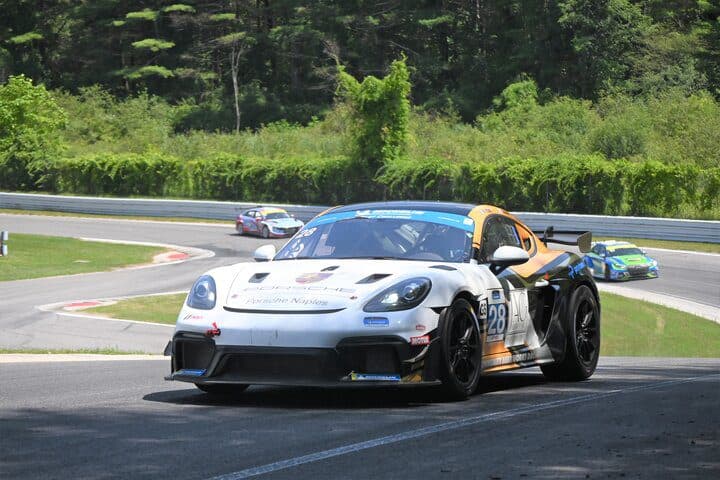 LAKEVILLE, Conn. – Rennsport One’s John Capestro-Dubets, on debut with the team, was fastest overall in IMSA Michelin Pilot Challenge Friday (July 15) at Lime Rock Park with a lap at 99.027 mph.

In the opening 60-minute practice session, there was a tie on top of the scoring pylon.  Both Rebel Rock Racing’s Robin Liddell and Rennsport One’s Stevan McAleer turned in laps at 98.685 mph to jointly top the session.  Liddell is considered to be first since he posted his time nine minutes before McAleer did.

Liddell and McAleer’s laps were .042 seconds faster than the Ford Mustang GT4 of PF Racing’s Kyle Marcelli.  TeamTGM’s Matt Plumb was fourth in his Porsche, while Murillo Racing’s Kenton Koch was fifth.

Owen Trinkler in the second TeamTGM Porsche was sixth, followed by CarBahn Motorsports with Peregrine Racing’s Tyler McQuarrie.  Kenny Murillo was eighth, then Mike Skeen in the FCP Euro Mercedes.  McCann Racing’s Andrew Davis was 10th.  The top 10 drivers were separated by just .209 seconds.  The top 25 cars (including 19 of the Grand Sport cars) were within one second of Liddell and McAleer’s best laps.

In TCR, JDC-Miller MotorSports’ Chris Miller was fastest with a lap at 97.550 mph, good for 19th overall, five-eighths of a second slower than Liddell and McAleer.  Miller’s lap was three-hundredths of a second faster than Bryan Herta Autosport’s Ryan Norman.  Road Shagger Racing’s Jon Morley was third in his Audi, then KMW Motorsports with TMR Engineering’s Tim Lewis Jr.  Stephen Simpson was fifth.

33 of the 34 teams present turned in laps during the session.  The sole holdout was the Victor Gonzalez Racing Team (VGRT) Honda Civic Type-R TCR, which spent the session in the paddock.

In the second practice session, Capestro-Dubets set the fastest lap of the day 12 minutes into the 60-minute session.  The rest of the field tried to beat the time, but it held up to lead the day. The lap ended up being a tenth of a second faster than Koch.  Riley Motorsports’ Thiago Camilo was third in his Toyota, then McQuarrie and FCP Euro with Ricca Autosport’s Trevor Andrusko.

In TCR, VGRT’s Karl Wittmer, despite skipping the morning session, was fastest in class with a lap at 97.640 mph, good for 12th overall.  Wittmer’s lap was .045 seconds quicker than JDC-Miller MotorSports’ Mikey Taylor.  Bryan Herta Autosport’s No. 98 Hyundai for Harry Gottsacker was third, then teammate Mark Wilkins.  Points leader Michael Lewis was fifth.

Qualifying for the Lime Rock Park 120 is scheduled for 4:45 p.m. ET Friday afternoon.  We will have a recap of qualifying and quotes from the pole sitter here at Frontstretch.