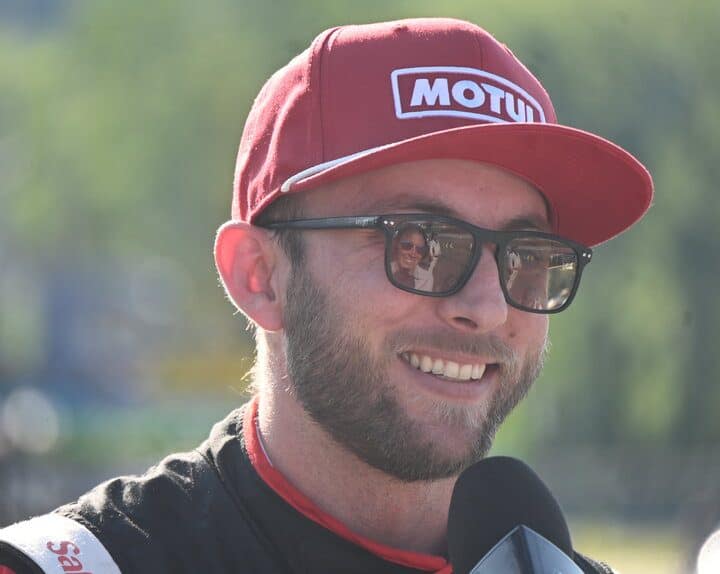 LAKEVILLE, Conn. – John Capestro-Dubets only got the call last week to drive the No. 28 Porsche this weekend at Lime Rock Park.  He has made the best of it by winning the pole Friday (July 15) for Saturday’s Lime Rock Park 120 with a lap at 99.100 mph.

“The car started off great today and it was all about executing in qualifying and finding that gap [in traffic],” Capestro-Dubets told Frontstretch afterwards.  “Hats off to RS1 because this car is a dream to drive.”

Capestro-Dubets is a regular in SRO America’s Pirelli GT4 America SprintX for AutoTechnic Racing in a BMW M4 GT4.  That is a very different car to drive.  Capestro-Dubets explained to Frontstretch that there are certain aspects of driving the Porsche Cayman GT4 RS CS that benefit you that would penalize you in the BMW.

In Grand Sport, there were a couple specific teams that had been quick in both of the practice sessions prior to qualifying.  Those teams were right at the front when qualifying started.  Murillo Racing’s Kenton Koch was fast early on, along with Riley Motorsports’ Alfredo Najri.

Capestro-Dubets was a little trigger happy to start the session.  Before the green flag flew, he left his pit stall and drove to pit out.  This is a violation and forced him to serve a drive-through penalty.

Once the drive-through was served, Capestro-Dubets quickly got himself into a rhythm.  Ultimately, it was his fifth lap at speed that usurped Najri to take the overall pole.

Capestro-Dubets ended up a mere .021 seconds ahead of Najri at the end of the session.  Koch will start third, then TeamTGM’s Hugh Plumb.  FCP Euro by Ricca Autosport’s Trevor Andrusko was fifth.

In TCR, the session may have been scheduled for 15 minutes, but everyone was done with four minutes to go.  That said, there was quite a bit of shuffling as the session went on.

The Hyundais battled for much of the time.  Harry Gottsacker was quickest early in his No. 98 Elantra.  Rory van der Steur was able to put himself up there in his Veloster, then Robert Wickens threw his hat in the ring in his Elantra.

Wickens put himself on top halfway through the session by just a couple of thousandths of a second over Gottsacker.  A lap later, he improved by nearly three-tenths of a second to 98.446 mph.  This lap held up to earn Wickens the TCR pole.

Wickens’ lap was ultimately good enough for fifth overall in the session.  The lap was .287 seconds faster than Gottsacker.  Michael Johnson was third in his Elantra, followed by Mason Filippi and van der Steur.  Filippi’s fourth-place effort actually breaks a streak for the No. 77 team as they had won the pole for every race this year that they had their Elantra at their disposal.

The Lime Rock Park 120 is scheduled to go green at 11:05 a.m. ET Saturday morning.  The race will be streamed live on Peacock starting at 11 a.m.