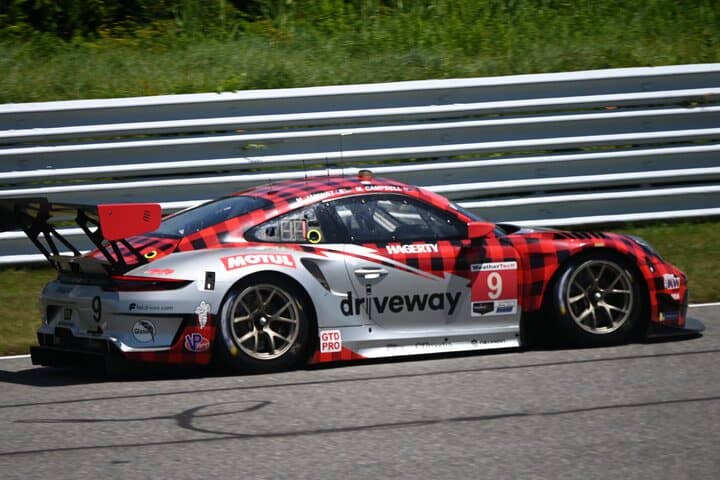 For much of the opening practice session, Pfaff Motorsports’ Mathieu Jaminet was fastest in his Porsche.  However, with less than nine minutes remaining in the 80-minute session, BMW M Team RLL’s John Edwards turned in a lap at 102.569 mph to lead the session.

Edwards’ lap was .085 seconds faster than Vasser Sullivan’s Jack Hawksworth in his first on-track action since his motocross injury.  Campbell was third, then Corvette Racing’s Antonio Garcia and The Heart of Racing’s Ross Gunn.

In GTD, CarBahn Motorsports with Peregrine Racing made major repairs to their Lamborghini to be able to continue racing after their big crash at Watkins Glen last month.  Robert Megennis put that car on top in class with a lap at 102.412 mph, good for second overall, .079 seconds slower than Edwards.

Megennis was .063 seconds faster than Team Korthoff Motorsports’ Mike Skeen.  Winward Racing’s Philip Ellis put himself in class with a quick lap right as the checkered flag came out.  WeatherTech Racing’s Jules Gounon was fourth in his Mercedes, while Vasser Sullivan’s Frankie Montecalvo was fifth.

There were no red flags during the session, but Rick Ware Racing’s Aidan Read did get off-course at turn 5 and picked up some damage.  The team had to take the car behind the wall for repairs.

The second session saw Pfaff Motorsports continue to show their quick form.  Jaminet put the No. 9 on top as soon as the GTD Pro teams were allowed on track.  Jaminet and Campbell swapped the top spot with Corvette Racing’s Garcia and Jordan Taylor for the rest of the session.  Campbell’s quick lap came with under three minutes remaining in the session.

Campbell’s lap was .051 seconds quicker than Taylor.  Hawksworth was third fastest, followed by the BMW of Connor de Phillippi and Gunn.

In GTD, it was Team Korthoff Motorsports’ Stevan McAleer that was quickest with a lap at 102.573 mph, good for fourth overall.  McAleer’s lap was just one-thousandth of a second faster than Read, whose car had been repaired after the off-course excursion in the first session.  Megennis was third fastest, then Montecalvo and Gounon.

Qualifying is scheduled to take place at 5:35 p.m. ET Friday.  The session will be streamed live at IMSA.com.