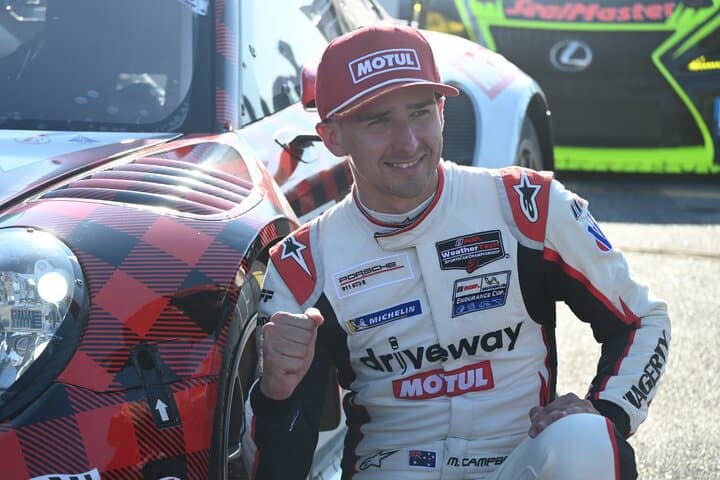 “The most important factor [in setting a quick qualifying lap at Lime Rock] is to turn the tire on as fast as possible,” Campbell told Frontstretch after the session.  “I think we were able to do that a lot quicker than in the previous [practice] session.  We put down just a couple of laps to minimize laps on the tires before tomorrow’s race.”

The GTD Pro teams tended to wait quite a bit to start their session.  Only Corvette Racing’s Jordan Taylor went out early.  He set a lap that was faster than all of the GTD teams and kept going on going.  The Heart of Racing’s Ross Gunn was the next out, but he didn’t leave the pit lane until nearly five minutes had elapsed in the session.  The others went out even later.

Campbell set his pole winning lap with a little over five minutes remaining in the session, but the remainder of the class continued to take shots at Campbell.  Vasser Sullivan’s Jack Hawksworth was the fastest of those, setting the fastest first sector of anyone multiple times late in the session.  However, he was unable to prevent Campbell from taking the pole.

Unlike the GTD Pro class, nearly everyone in the GTD class went out almost immediately.  There was an exception to that rule, though.  Vasser Sullivan’s Frankie Montecalvo decided to wait for the first five minutes before going out.  From there, he went hard for the final 10 minutes of the session.  On his seventh lap at speed, Montecalvo put down a lap at 103.119 mph to win the class pole in sixth overall.

WeatherTech teams have a 20-minute warmup session scheduled for Saturday morning at 9:05 a.m. ET.  The race itself is scheduled to go green at 3:10 p.m. ET.  Live coverage will be streamed on Peacock starting at 3 p.m.  Tape delayed coverage will air on USA starting at 5 p.m., depending on whether the NASCAR Xfinity Series Crayon 200 from New Hampshire Motor Speedway is complete by that point.