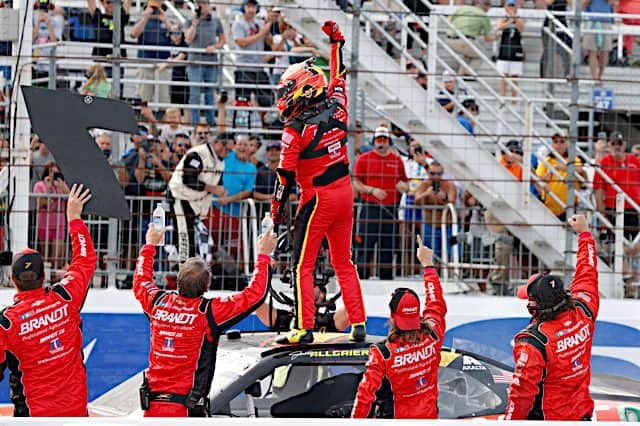 The No. 7 took the lead from Landon Cassill with less than 20 laps to go and sailed away to his third win of the season and 19th of his career.

It was Chevrolet’s first Xfinity win in 15 years at Loudon.

“We finished second last year to one (a Toyota),” Allgaier told NBC Sports. “I told these guys I really wanted to win here. This place is so much fun over the years. First of all, it’s my wife’s birthday today. If I can’t be with my wife on her birthday, the best way to do it is take home a trophy to her.

“Just proud of our team. I didn’t do a good job early on in the race and I apologize to Julia and the (No.) 45 team, I got into her, I still don’t know what happened but I just feel bad no matter what was the case was. Just felt like all day I wasn’t doing a good job and the guys kept me calm and were doing great pit stops all day. Eddie D’Hondt is awesome up on the spotter’s stand. Just really proud of this team.”

Trevor Bayne was second, Cassill took home third, Noah Gragson was fourth and Brandon Brown rounded out the top five. However, after the race, both Cassill and Gragson’s cars failed post-race inspection due to height violations. They were disqualified and dropped to 37th and 38th, respectively, moving Brown to third, Jeremy Clements to fourth and Sheldon Creed into the top five.

The race saw a lot of the contenders have issues throughout the afternoon.

After polesitter Josh Berry dropped to the back during the pace laps, the lead exchanged hands a few times throughout stage one. Daniel Hemric shot out to the lead but Joe Gibbs Racing’s Bayne and Ty Gibbs closed in quickly. Around lap 6, Gibbs drove underneath Hemric, while Bayne got by both drivers and into the lead.

Then on lap 23, Gibbs took first from Bayne as Allgaier moved into second.

As the field worked through traffic, Allgaier had some pressure from behind from William Byron. On lap 35, they came off of turn 4 and Allgaier tagged the left-rear of Julia Landauer, sending her around and into the inside wall.

Take a look at the contact between her and Justin Allgaier. #NASCAR

Landauer, who made her series debut, went down pit road for repairs and was able to make minimum speed to continue in the race. She later crashed into Matt Mills after a lap 98 restart, sending them both into the wall, and retired from the race.

Many drivers at the front decided to pit following her first crash, while Ryan Sieg and a few others stayed out. Sieg was able to maintain the lead through the end of the stage to claim the stage win.

After the race went back to green, the lead once again swapped a couple times, as Gibbs started out in the lead but Byron got by him around lap 82. As the No. 88 soared to the stage two win, Hemric clipped Gragson while racing for sixth place. Gragson didn’t anything, though, and continued on.

Mayhem broke loose in the final stage, as several contenders had trouble. The first one was Gibbs, who had reported an issue with his brakes during that last run. The bolt to the camber shaft broke; the team repaired it and sent him back out on track.

Another frontrunner, Byron, reportedly ran over something that caused his right-front tire to go down as the field restarted. He fell backwards and pitted for right side tires.

Also, Hemric was knocked out of the race when he cut a left-rear tire and spun around hard into the outside wall.

But that was nowhere near as big as what happened on lap 125. Berry, who found himself at the front, lost the lead to Cassill and started to come down to the bottom. As he did, Creed’s No. 2 car was there, sending the No. 8 around in front of the field. Many cars couldn’t avoid Berry; Sieg got into him, while Jeb Burton slammed into the back of the No. 39, lifting it into the air.

Nowhere to go for a lot of drivers. pic.twitter.com/5VyKp600rD

Myatt Snider slammed into the rear of Riley Herbst, ending Snider’s day. Berry, Sieg and Burton also were out of the race following this crash.

The cautions were not over, though. AJ Allmendinger moved up while Alex Labbe was on his outside, which caused the No 16 to make heavy contact with the outside wall. At the same time, Brandon Jones had slowed down a bit when he saw them wreck in front of him. Brett Moffitt didn’t slow down enough and got into the back of Jones, who hit the inside wall hard, knocking him out of the race.

Following the restart, Allgaier led his first laps of the race with less than 50 laps to go. However, problems got worse for Byron, as he felt like his motor was expiring. He finished 28th.

But in the end, Allgaier was able to take home his third victory of the season on his wife’s birthday.

I found it curious (for want of a better word) to hear Burton making excuses for Allgaier taking out Landauer. You can weasel word it all you want, but the replay was clear. He just drove up into her & took her out. It really didn’t take any explanation, & he just sounded lame.

In all fairness, I guess I have to also mention AJ trying to blame his spotter for doing the same thing. I love the guy, but this is one he just has to own.

Ty Gibbs interfering with the cars at the end of the event showed just how clueless he is. I can’t believe grampa or anyone else didn’t tell him to back off. Or maybe he just couldn’t hear them in his own little world.

I have always believed that Justin Allgaier was a Cup-level talent. He might have had a better shot at a decent ride earlier in his career if NASCAR and the networks weren’t spending so much time and effort propping up a swimsuit model. How’d that work out?