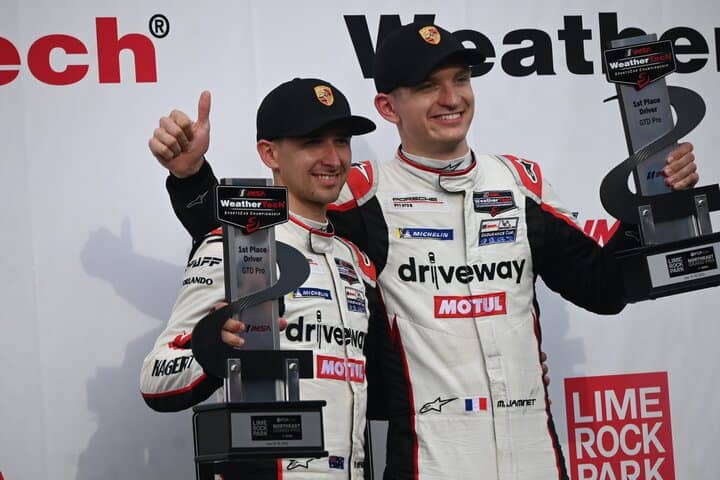 LAKEVILLE, Conn. – Pfaff Motorsports’ Matt Campbell and Mathieu Jaminet were able to outlast the rest of the pack to win the FCP Euro Northeast Grand Prix Saturday (July 16) at Lime Rock Park.  It is the team’s fourth win of the season and second in a row.

Pfaff Motorsports’ Matt Campbell led the field to green Saturday and managed the gap between himself and Vasser Sullivan’s Jack Hawksworth.

Campbell led without challenge up until the first pit stop.  The Vasser Sullivan crew was able to get Hawksworth out in the overall lead.

Behind the two leaders, there was plenty of trouble to go around.  BMW M Team RLL’s Connor de Phillippi ran up on the WeatherTech Racing Mercedes of Cooper MacNeil that was about to pit in the Diving Turn.  When MacNeil let off the accelerator in order to prepare to pit, de Phillippi all but ran in the back of MacNeil and managed to spin himself out.  De Phillippi was able to continue without issue.

Later on, the team was forced to pit the No. 25 with engine woes just before the halfway point.  They were unable to continue.

Corvette Racing struggled at times during the weekend for pace, but was running relatively well on Saturday.  That is, until Antonio Garcia had contact with Jules Gounon in the WeatherTech Mercedes.  This contact bent the right rear suspension on the Corvette C8.R.  Garcia brought the car in for repairs that ultimately cost the team six laps.

Late in the second stint of the race, Campbell was able to run down Hawksworth for the lead.  A brief battle erupted with Campbell ultimately taking the upper hand.

Shortly afterwards, pit stops split the group up.  A slower stop cost Vasser Sullivan’s No. 14 a bunch of time as the change to Ben Barnicoat was a little slow.  That allowed The Heart of Racing’s Alex Riberas to jump over Barnicoat into second.

Riberas had pitted earlier than Barnicoat or Jaminet, so he had a few laps on his tires by the time Barnicoat came out of the pits.  Ultimately, Jaminet was able to pull away while Barnicoat and Riberas were left to fight for second.

When Jaminet exited the pits, he had a lead of around five seconds over Riberas.  He was able to double that with 30 minutes to go.

That lead was erased when Ryan Eversley slid off-course and hit the tires in the Diving Turn with 21 minutes to go.  That set up a nine-minute sprint to finish.  On that final run, Jaminet was able to get a great restart and held on to take the win.

Campbell and Jaminet’s margin of victory was 1.883 seconds over The Heart of Racing’s Riberas and Ross Gunn.  Barnicoat and Hawksworth were third.

In GTD, Vasser Sullivan’s Frankie Montecalvo started on the class pole, but almost immediately lost his advantage to CarBahn Motorsports with Peregrine Racing’s Robert Megennis.  There was a reason for this, though.  Megennis illegally changed lanes prior to the start-finish line on the start of the race.  That is a no no and earned Megennis a drive-through penalty.

When Megennis served his penalty, Montecalvo retook the class lead.  Rick Ware Racing’s Aidan Read spun his Acura in Big Bend early on after potential contact from Ryan Hardwick, but was able to continue.  No penalty was assessed.

Meanwhile, trouble erupted further back as Turner Motorsport’s Robby Foley appeared to have some engine issues.  Foley slowed on course briefly, then regained his pace despite the BMW M4 GT3 sounding off-note.  Eventually, Foley pitted so the Turner crew could take a look at the V6 engine.  Eventually the decision was made to put the car behind the wall.

Montecalvo was able to hold onto the advantage until the first round of stops 45 minutes into the race.  He pitted at that point and gave way to Aaron Telitz.  The round of stops ultimately resulted in Paul Miller Racing’s Madison Snow picking up the class lead with Telitz close by.  The pace to that point was enough to give the duo more than a third of a lap over The Heart of Racing’s Maxime Martin in third.

During the second round of stops, Paul Miller Racing had a slow stop when they swapping over from Snow to Bryan Sellers.  As a result, Telitz ended up with a substantial lead over Winward Racing’s Philip Ellis.

The Eversley crash erased a 15 second lead for Telitz.  On the restart, Ellis was able to get past Telitz to take the class lead.  After Ellis got by, Telitz ran in the back of Ellis and damaged the hood.  That necessitated a late stop to remove the hood.

On the final lap of the race, Ellis’ Mercedes ran out of fuel.  That allowed Sellers to pull through to take the class win.  The margin of victory was .631 seconds over Martin and Roman DeAngelis, then Megennis and Jeff Westphal.  Team Korthoff Motorsports’ Stevan McAleer and Mike Skeen were fourth, while Ellis and Russell Ward had to settle for fifth.

The IMSA WeatherTech SportsCar Championship will take a couple of weeks off before heading to Road America in August for the IMSA Fastlane Sportscar Weekend.  The race will be streamed live Aug. 7 on Peacock at 2:40 p.m. ET.  The race will air via tape delay on USA at 6:30 p.m.