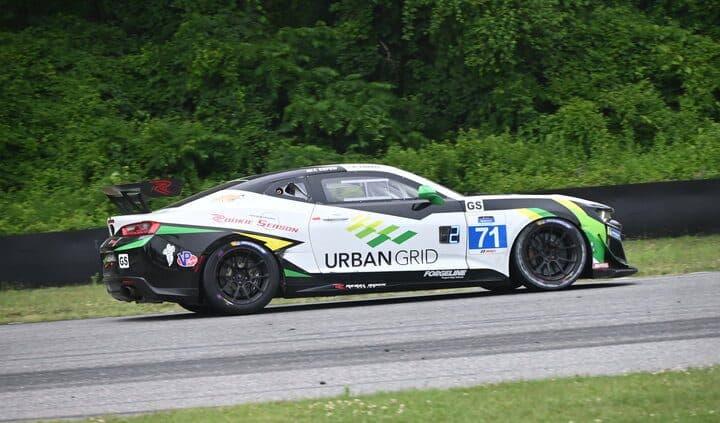 LAKEVILLE, Conn. – Rebel Rock Racing’s Robin Liddell was able to get past PF Racing’s Kyle Marcelli in Big Bend with 11 minutes to go. From there, he was able to use fresher tires to pull away to win the Lime Rock Park 120. It is Liddell and teammate Frank DePew‘s first win of the year.

“I was slowly closing on [Marcelli] and my good friend Andrew Davis, who was a lap down, was between us,” Liddell told Frontstretch after the race. “I was just hoping that he’d get out of the way and let me go for it. When I got to Kyle, I realized that I had a bit more grip in the car. I was able to carry more speed through the corner to get alongside him and get past.”

Rennsport One’s John Capestro-Dubets started from pole in his Porsche and immediately showed the pace that he had exhibited all day on Friday. He quickly opened up a comfortable margin of nearly five seconds in the first 15 minutes. Meanwhile, Murillo Racing’s Kenton Koch was able to get by Riley Motorsports’ Alfredo Najri in the opening laps for second.

The tone of the race changed 35 minutes in when the first full course yellow came out. First, KMW Motorsports with TMR Engineering’s Roy Block ended up in the grass exiting the Diving Turn. Behind them, the Ford Mustangs of PF Racing’s James Pesek and KohR Motorsports’ Bob Michaelian resulted in Pesek sliding off-course and hitting the Armco barrier.

The pits opened for the Grand Sport teams too early for their starting drivers to meet the 40-minute minimum start time, so they had to stay out at first. The next time around, when it opened for TCR teams, the 40 minutes had elapsed, allowing them to stop. Capestro-Dubets waited until the next time around when the pits were open for everyone to make his first stop and swap over to Stevan McAleer.

When the race restarted, Kenny Murillo, who had not stopped, was in the overall lead. McAleer restarted fifth and quickly made his way back to the overall lead. Once there, he pulled away from the field as they squabbled for position in a large pack. Eric Foss was one of them, having taken fresh left side tires during the yellow.

The multiple pit strategies led to a series of comers and goers as drivers on fresh tires dealt with those that had only two fresh tires or none at all. McAleer was able to pull out to a five-second lead, while Trent Hindman was able to race up to second.

Murillo dropped back until TeamTGM’s Matt Plumb ran up on him. Plumb tried to look to the inside of Murillo while Murillo’s teammate Eric Foss was also looking at Plumb. Contact was made, sending Plumb into the wall and out of the race to bring out the second full course caution. Afterwards, Plumb was rather frustrated when he talked to Frontstretch about the crash.

In the interview, Plumb asked if Foss had received a penalty for the incident. IMSA officials did review the incident, but it ultimately didn’t matter. A lap after the crash, Foss hit a piece of debris and broke the oil pan off of his car, ending his day as well. Foss also explained the situation to Frontstretch in the paddock.

During the long yellow that resulted here, a series of pit stops were made as the barrier was repaired where Plumb made contact. In addition, a crash under caution involving KohR Motorsports’ Nate Stacy and Hardpoint’s Eric McAlister prolonged things. The contact resulted in McAlister spinning in West Bend and breaking his left rear suspension. Stacy had severe damage to the right front that ended his day.  McAlister was out shortly afterwards.

Marcelli ended up with the lead in that sequence with the lapped McCann Racing Porsche of Andrew Davis right behind. With that setup, Marcelli was able to open up a five-second lead. Liddell restarted third and was able to get past Mike Skeen relatively quickly.

Once in second, Liddell steadily ran down Marcelli for the lead. It was only once Davis got out of the way that the battle heated up. With the fresher tires, Liddell was able to get past in Big Bend. Once in front, he pulled away to take the win.

Liddell and DePew ended up 2.951 seconds ahead of Hindman and Alan Brynjolfsson at the finish. With Foss’ issues, Brynjolfsson and Hindman’s point lead is unofficially 260 points with three races to go.

Marcelli and Sheena Monk held on for third in their best finish of the season. FCP Euro with Ricca Autosport’s Skeen and Trevor Andrusko were fourth despite an off-course excursion early on, while NOLAsport’s Jason Hart and Matt Travis were fifth.

Turner Motorsport’s Bill Auberlen and Dillon Machavern recovered from an unscheduled stop at the end of the first lap to finish sixth, followed by Michaelian and Billy Johnson. Murillo and Christian Szymczak were eighth, while Capestro-Dubets and McAleer had to settle for ninth after their tires went away late.  Robby Foley and Vin Barletta in the second Turner BMW were 10th.

In TCR, Bryan Herta Autosport’s Robert Wickens started from pole in search of a third consecutive win for himself and teammate Mark Wilkins. BHA was running 1-2-3-4 until they ran up on the back of the Grand Sport class. While negotiating through the slower GT4 cars, Harry Gottsacker was able to snatch the lead away from Wickens in the Diving Turn.

Once the two classes became intertwined, Gottsacker and Wickens quickly began to pull away from the rest of the class. Within 35 minutes, the duo were 20 seconds ahead of second place.

The Pesek crash saw nearly everyone in class pit for their driver change, along with tires and fuel. Victor Gonzalez Jr. attempted an alternate strategy and stayed out to take the lead, but the worn tires meant that he was a sitting duck on the restart and Mark Wilkins put the No. 33 Hyundai back in the lead. That advantage was short-lived as Stephen Simpson put the No. 54 Hyundai up front.

When the final stops were complete under the long yellow for the Plumb crash, Road Shagger Racing’s Jon Morley ended up with the class lead. JDC-Miller MotorSports’ Mikey Taylor was second, having recovered from teammate Chris Miller getting spun out early on by AJ Muss.

A few laps after the restart, Taylor was able to get and take the lead. The two had contact that caused Murillo Racing’s Brent Mosing to spin out in turn 4. For the remainder of the race, Taylor was hounded by van der Steur Racing’s Tyler Gonzalez.

In the closing laps, Taylor and Tyler Gonzalez fought hard with Belgard & Techniseal Racing’s Denis Dupont giving chase. With a couple of laps to go, Tyler got the No. 19 alongside in Big Bend. The two cars had substantial side-to-side contact that ultimately broke the left rear suspension on the No. 19 Hyundai Veloster N TCR. Taylor’s Audi was wounded, but he was able to hold on to take the win.

Miller and Taylor, who ended up finishing 11th overall, had a margin of victory of 1.148 seconds over Dupont and Preston Brown, who started last. Simpson and Michael Johnson had the best Hyundai in third, followed by Tyler Maxson and Mason Filippi. Points leaders Michael Lewis and Taylor Hagler finished fifth.

Today’s race will air via tape delay July 23 on USA at 12:30 p.m. ET. It will be on directly opposite the NASCAR Camping World Truck Series race from Pocono Raceway.

Michelin Pilot Challenge teams will be off for two weeks before traveling to Wisconsin for the Road America 240. That race will be Aug. 6 at 2:15 p.m. ET.