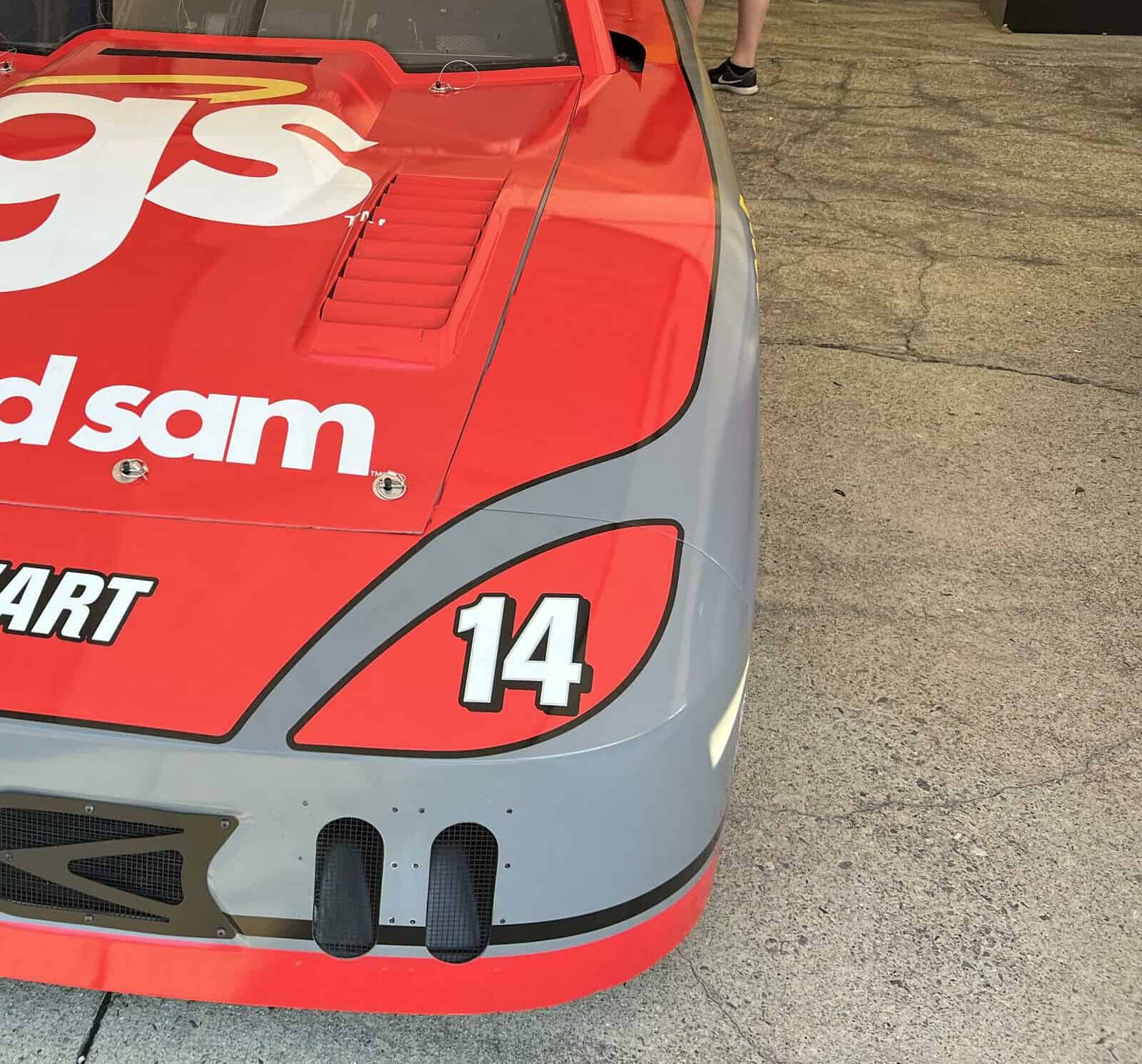 In a night full of chaos and carnage, Tony Stewart held on through several late race restarts to lead every lap and win the Camping World SRX Series Race at Federated Auto Parts Raceway at I-55 on July 16.

He led every single lap in the main event.

Stewart has now won every SRX main event on dirt — he also won the two dirt races in 2021 at Knoxville Raceway and Eldora Speedway.

Stewart’s near-perfect night started by winning the pole for the main event after a phenomenal heat one and two, finishing second and first. Starting next to him was Ernie Francis Jr. Things stayed relatively calm and status quo through the SRX Fun Flag, which came on lap 25 of the 70-lap feature.

The caution came back out on lap 34. Paul Tracy looped his car and collected Matt Kenseth, damaging both cars heavily. Under the caution, Hailie Deegan experienced mechanical issues and came to pit road. SRX officials tried to hold off restarting until Deegan could rejoin, but eventually threw the green with 15 laps to go, 21 laps after the caution was thrown.

Tracy brought out the caution yet again with 10 laps to go. Since the last 10 laps must be run under green flag conditions, the race lap count was paused until the green flag flew again.

As Stewart went to take the white flag, yet another caution came out for Ryan Hunter-Reay and Bobby Labonte spinning, setting up SRX’s version of an overtime, two-lap shootout.

Finally, Stewart was able to take the checkered flag after a greatly extended race. Marco Andretti came home second yet again in a beaten and battered race car, while local guest star and track owner Ken Schrader rounded out the podium in third.

“This place is pretty awesome,” said Stewart after the race. “Kenny Schrader and these fans are diehard race fans, and you aren’t gonna find fans that are any more diehard in this country for late models and modifieds and sprint cars than here at Pevely [Missouri].”

“… It’s hard. It’s been a 90 degree day, it’s sunny, windy, everything that kills dirt tracks, and their staff did an awesome job giving us an awesome racetrack there.”

Much like South Boston Speedway, Stewart’s win came amidst a night of bent sheetmetal and confusion, even in the heats. A season-high 10 incidents occurred in the race, and every driver seemed to have trouble at one point or another. After a few solid weeks, Tracy was again caught in the a firestorm of accidents and run-ins, with his car looking like it had gone through the main event by the end of heat one.

Meanwhile, Andretti finished runner-up after absolutely shearing the nose off of his car in heat two. It seemed like Stewart was the one car that came across the finish line clean (well, aside from the dirt and mud, obviously).

Caution after caution in the last 15 laps was very un-SRX-like, most of them being thrown for single-car spins. And with just one race left, everyone who works in the SRX shop has their work cut out for them to get these cars race ready again. The last 10 laps being run under green rule was also utilized for the first time this season, extending the race by several laps, even if it doesn’t say so in an official stat sheet.

The question will now be whether or not Stewart can win back-to-back championships. After being 37 points back after last week, Stewart’s dominant night most certainly launches him into championship contention next week at Sharon Speedway. Andretti currently holds the number one spot as SRX heads to Hartford, Ohio for the series’ season finale.

Speaking of Sharon, the final race of the 2022 Camping World SRX season will feature the battle of the Blaneys – NASCAR driver Ryan Blaney will compete alongside his dad, Dave (who also owns Sharon Speedway) with the SRX regulars as the series decides a championship in one week’s time.

Andretti started on pole with Schrader to his outside. Andretti broke out to the lead quickly, but Schrader quickly got around him to take the lead, one that he would not relinquish the rest of the heat. After a caution for Tracy, Schrader had to fend off a challenge from Stewart, but ultimately Schrader took the heat one victory, albeit under caution as Tracy ran into Ryan Newman and they both tagged the wall. A frustrated Newman backed into Tracy as the cars went to pit road on the cooldown lap.

The inverted field for heat two meant that Hunter-Reay would start first, next to Kenseth. Kenseth used the outside to his advantage and took the lead early. Michael Waltrip smacked the wall early and brought out a caution. Kenseth continued to lead as Andretti tore the nose off his car with less than five minutes left, but not bringing out a yellow. Kanaan then muscled his way around Kenseth for the lead as Stewart moved through to second, and Francis Jr. scooted by for third. With just over two minutes left, Stewart made a textbook slide job pass on Kanaan for the lead and held on to win the second heat, charging all the way up from starting 12th. Tracy did not start the heat, while Waltrip and Andretti did not finish.

The Camping World SRX Series championship race at Sharon Speedway will take place on July 23 at 8 p.m. ET on CBS.

This series is pretty entertaining, and the people running it seem to get it…I FAR prefer caution laps not counting with ten to go over green-white-wreck finishes. Allen Bestwick is better in the booth than arguably anyone announcing NASCAR these days except Mike Joy (with anyone else it’s not even close). The series might have a pretty bright future.

Of course Tony wins. This is his series, he picks the drivers he wants to race against, he picks the tracks to race on and we all know Tony has a huge ego. So, no I’m not surprised he won last night. I watched all those restarts last night late in the race and I find it really hard to believe that NONE of those drivers that had all those opportunities to beat him were able to do it. So that indicates to me that there is something mighty fishy about this series.

You all do remember Tony won the SRX championship in 2021, right? Yes, he did and it looks like he’s well on his way to doing it again this year.

I’ve always said from the beginning that Tony’s racing in his own series is a conflict of interest. And now we know why. Not only that but it’s really looking more and more like it’s more than just that.

21 laps under caution while waiting for Deegan !!! Why !

Just can’t wrap my head around made for tv motor sports.

from the clown car pace car to the geriatric entry list.