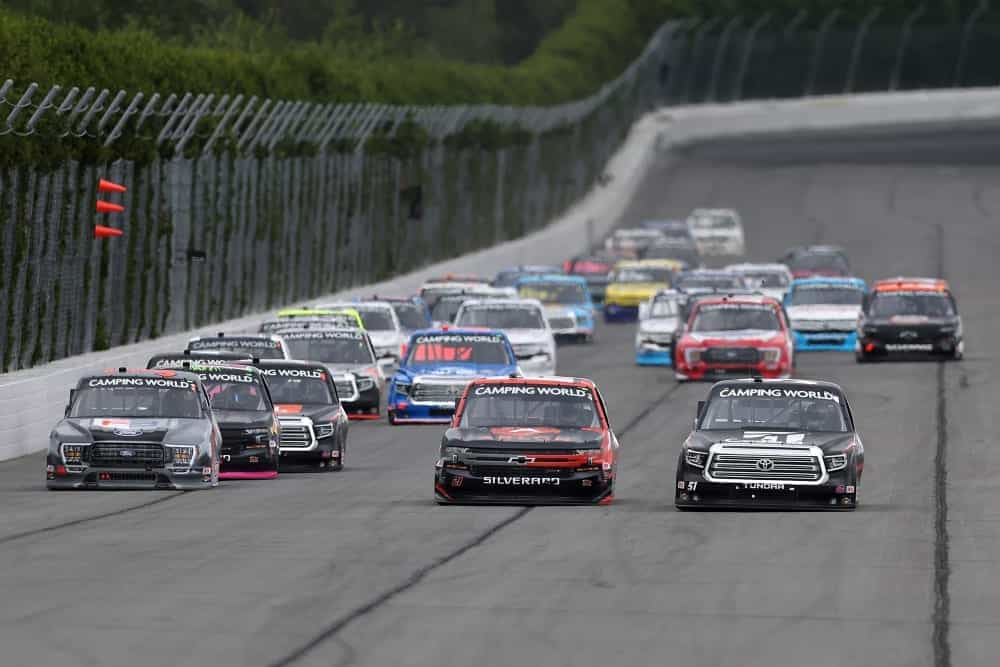 The NASCAR Camping World Truck Series returns after a week off to 2.5-mile track Pocono Raceway.

Pocono sits as the last regular season race for the series as drivers outside the cutline will make one more push to make the playoffs.

Thirty-eight trucks are entered for 36 spots; two drivers will go home after qualifying.

Austin Hill returns to the Truck Series to make the race in Spire Motorsports’s No. 7 Chevrolet. Hill also competed in the truck at the season-opening race at Daytona International Speedway.

Ryan Preece will attempt his seventh start of the season in the No. 17 Ford for David Gilliland Racing. Preece won his last start at Nashville Superspeedway.

Jesse Little attempts his first start since Nashville and 10th of the year in the No. 20 Shriners Chevrolet for Young’s Motorsports.

After recording a top 10 in just his second career start, Max Gutierrez returns to the No. 22 Chevrolet for AM Racing.

Tate Fogleman looks to make his first start with Rackley WAR. in the No. 26 Chevrolet. Fogleman competed in the first 11 races with On Point Motorsports, then failed to qualify for the Nashville race with Rackley.

Bryan Dauzat will try to make his second start of 2022 and first since Daytona with FDNY Racing in the No. 28 Chevrolet.

Kaden Honeycutt attempts his third start of the year and first with On Point Motorsports. Honeycutt competed in two races this season with G2G Racing.

Josh Reaume returns to his No. 33 Reaume Brothers Racing Toyota for his fourth attempt of the season. Reaume last competed at Charlotte Motor Speedway in May.

Armani Williams will attempt to make his season debut with Reaume Brothers Racing in the No. 43 Toyota. Williams attempted to qualify at Texas Motor Speedway but failed to make the race.

Todd Bodine will look to make his 800th NASCAR national series start with Halmar Friesen Racing in the No. 62 Camping World Toyota.

The last fight for a playoff spot will begin on Saturday, July 23 at noon ET on FOX Sports 1.