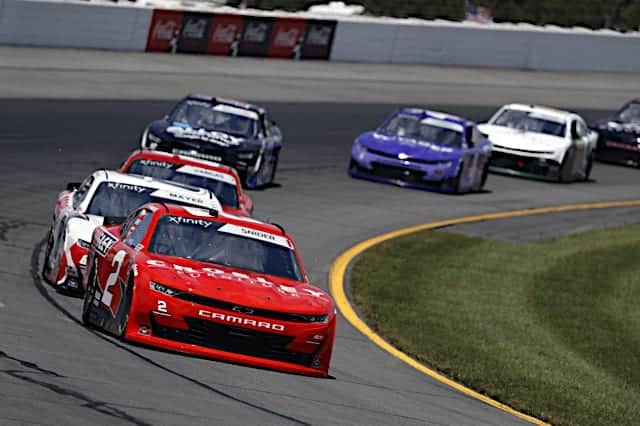 The NASCAR Xfinity Series heads to Pocono Raceway for the Explore the Pocono Mountains 225.

There are 39 entries for 38 spots, meaning one driver will have to watch from home after qualifying.

After making his last four starts in Alpha Prime Racing’s No. 45, Stefan Parsons steps into the No. 5 Chevrolet for BJ McLeod Motorsports.

Cole Custer will attempt to make his fourth series start of 2022 in search of his second win of the season. Custer will drive the No. 07 Ford for SS-Green Light Racing with Jeff Lefcourt. Joe Graf Jr., who has entered every race so far this season between a variety of rides but chiefly the No. 07, is not on the entry list at the moment.

Timmy Hill attempts his fourth start of the season with MBM Motorsports in the No. 13 Toyota. Hill also failed to qualify at Auto Club Speedway in February.

After a solid series debut at Road America, Sammy Smith returns to the No. 18 Toyota for Joe Gibbs Racing to attempt his second career NXS start.

Santino Ferrucci returns to the series in an effort to make his season debut. Ferrucci will pilot the No. 26 Toyota for Sam Hunt Racing. The Woodbury, Conn., native made seven starts with SHR in 2021.

A week after Kyle Weatherman gave Jesse Iwuji Motorsports its first top 10 as a team, Jesse Iwuji returns to the No. 34 Chevrolet in an attempt to qualify for his ninth start of the year.

RSS Racing brings Kyle Sieg back to the No. 38 Ford. Sieg last competed two weeks ago at Atlanta Motor Speedway.

Alpha Prime brings Rajah Caruth back to the No. 44 Chevrolet. Caruth will make his third attempt of 2022 and first since Dover Motor Speedway in May.

Two-time NXS champion and two-time NASCAR Cup Series winner Ricky Stenhouse Jr. makes his return to the series with Big Machine Racing in the No. 48 Chevrolet. Stenhouse last competed in an NXS race in 2016 and has only made two series starts since his 2012 title run.

Ronnie Bassett Jr. will look to make his first race of the season in the No. 77 Chevrolet for Bassett Racing. Bassett has entered three races but failed to do so in all of them.

Drivers will look to master the Tricky Triangle on Saturday, July 23 at 5 p.m. ET on the USA Network.