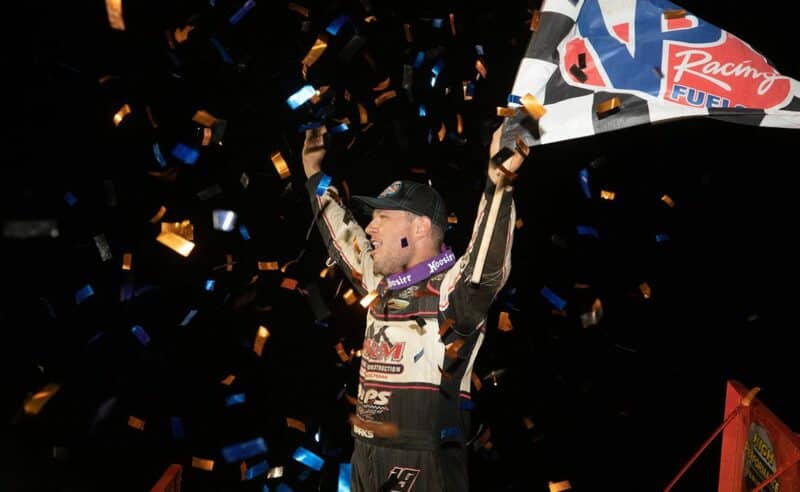 Brent Marks does his best Brandon Overton impression, scoring his second six-figure payday of the weekend at Eldora Speedway in the 39th Kings Royal.

We've seen a couple unbelievable individual performances in the past year.@Boverton76 swept the '21 Double #DLMDream week and hauled out $273,000 in the process@bmracing19 put the Sprint Car world on notice this weekend with his $275,000 sweep of the #HB100K & #KingsRoyal

Brent Marks’s 13th win of the 2022 season was the biggest of his career, as a lap 22 pass of Brian Brown for the race lead landed him the Kings Royal crown, a $175,000 paycheck that marked his second six-figure race win in three days at Eldora after winning the $100,000 Historical Big One Thursday night.

“By the power bestowed upon me, I hereby crown thee King Brent the 39th.” pic.twitter.com/CQPQk6IuO4

With Marks running an independent schedule and not needing World of Outlaws show-up points, Marks and his team actually opted to skip the preliminary feature that ran Saturday morning after a Friday rainout. That decision paid off, with Marks winning his heat race and proving unstoppable in his charge to the front of the field in the Kings Royal A-main.

Former Kings Royal winner Kerry Madsen led the opening seven laps, with Knoxville Raceway regular Brian Brown blowing past him on a lap 8 restart to lead until Marks got to the front. Defending Kings Royal champions Tyler Courtney and Kyle Larson never factored in for the race win in 2022, though Larson did charge from 10th to fourth over the final 15 laps.

Marks’s victory made him the first driver in Eldora Speedway history to sweep both the Kings Royal and Historical Big One in the same weekend.

Marks really is the sprint car equivalent of Brandon Overton. Running a true outlaw schedule this year as opposed to a national tour, Marks already has a double-digit win total and is in the neighborhood of a half-million dollars in winnings with months left to go in the season. But perhaps most significant, and the accomplishment that had very audible chants coming from the Eldora grandstand post-race, Marks scored another major victory for the Pennsylvania Posse on the Outlaws’ turf, a bigger triumph than his Devil’s Bowl win in March.

The Posse have finally reclaimed the throne. 🤴🏼

Five-time Kings Royal winner Donny Schatz came up one spot short of his second win of the 2022 season, but Saturday’s feature was the best he’s run since his season-opening win at Volusia back in February. Said the veteran driver post-race, the race marked a breakthrough for his race team in finishing events, which has been their Achilles’ heel through much of the season.

Cory Eliason’s biggest race since being released from his ride at Rudeen Racing went about as well as he could hope. Eliason won a heat race, then finished seventh in the Kings Royal A-main on Saturday while his replacement, Zeb Wise, failed to qualify.

Glad @RudeenRacing finally fixed their issues on being slow for the last 3 years… Zeb has really rejuvenated the 26. Oh yeah… @Cory_Eliason ran 7th tonight too #nottheproblem

Brown gave up the Knoxville Raceway points lead to run the Kings Royal at Eldora this weekend, skipping a weekly race on Saturday. Brown led laps and finished sixth, and with the Kings Royal paying $5,000 to start, he made at least as much money running the big show at Eldora than he would have even if he had won at Knoxville Saturday.

As much as DirtVision tried to walk their words back, commentary from their crew made it sound a lot like this would be the final Kings Royal for Sammy Swindell. If that’s the case, it was hardly a fitting exit. Swindell went from first to sixth on the first lap of the fifth heat race after his car didn’t seem to move on the restart. Swindell then wrecked out on the first lap of the Last Chance Showdown.

Travis Philo lost a transfer spot in his heat race Saturday afternoon after jumping the cushion in turn 2 while racing with Chili Bowl Nationals winner Tanner Thorson and turning into the backstretch wall. DirtVision’s crew inadvertently pinned that incident on Thorson, though the replay did exonerate him.

Having said that, the video would later confirm that the same Thorson triggered the sprint car equivalent of the Big One Saturday in the LCS, getting out of shape entering turn 1 and sending Danny Dietrich flying in a wreck that would collect four other cars.

. @DIRTVision REPLAY: Chaotic start of the @MicroLiteLLC Last Chance Showdown at @EldoraSpeedway see's five cars come together in a big way! Thankfully, everyone involved was able to walk away! #KingsRoyal pic.twitter.com/a833LwPjgb

Former Cup Series regular Dave Blaney made a forward charge from sixth to third in his heat race to qualify for the Kings Royal feature, though he finished a distant 21st in the main event.

Former Cup Series regular Kasey Kahne ended up sitting out Saturday’s Kings Royal after flipping three laps into the rain-delayed “Knight Before” feature earlier in the day Saturday, a wreck that dumped more than 20 gallons of racing fuel on the surface and caused an extended red flag.

Defending Cup Series champion Larson got hot late in the Kings Royal feature, but could only muster a 10th to fifth charge in the feature event.

To say Eldora was packed is putting it lightly. There may not be a stock car series in America that shouldn’t be angling for a date at this venue.

Did anybody else find it a little sacrilegious to see Eldora commentator Blake Anderson seated on the Kings Royal throne when he was doing the live intro to DirtVision’s web stream? It’s one thing to admire a trophy, it’s another to essentially play with it as a non-competitor.

Between the daylight conditions of Saturday morning not providing a great reference for Saturday afternoon/evening’s Kings Royal feature, the ongoing battle for tires, engine parts, etc., I was honestly surprised that more cars not needing World of Outlaws show-up points didn’t take the Marks route to sit out Saturday’s rescheduled preliminary “Knight Before” feature.

I loved how DirtVision’s coverage this year routinely referred to previous winners of the Kings Royal feature as Kings based on their win date.

If there’s a way to do it that’s sponsor-friendly I’d want to see that go a step further in 2023 with decals on the former winners’ cars.

Super late model drivers such as Overton a year ago and Jonathan Davenport and Chris Madden this year have already proved that running outlaw schedules as opposed to following national tours can be very profitable if drivers can pile up wins. Sprint car racing is a little different, as there is truly a pinnacle series (World of Outlaws) as opposed to three in late models (Lucas Oil, WoO and now the XR Super Series). But with Marks proving very capable of besting the Outlaws repeatedly in 2022, will 2023 see any Outlaws adopt an “outlaw” slate?

Yes, the decision to hurry up the Kings Royal race program did lead to an embarrassing caution three laps into the feature, where smoke from the pre-race fireworks made visibility in turns 1 and 2 impossible for track officials.

Having said that, the show went very smoothly, with hot laps through victory lane interviews with the podium finishers clocking in at four and a half hours. That’s for a crown jewel event with qualifying, a 50/50 draw, extended driver intros and a trophy ceremony. Take out the hot laps and the entire program was web streamed in a 3.5-hour time slot.

I bring this up only because it feels like a real missed opportunity for the dirt racing industry. The ability to run crisp programs in that timeframe not only makes the sport more accessible to the casual fan, but also could open doors for actual TV coverage to supplement streaming.

Yes, I am fully aware of how hard a track staff gets pushed making a program run that fast, and even if the staff gets their work right, the second the surface starts taking rubber or a car flips into the catchfence the program is stalled and the time slot likely lost. But in an era where the SRX tour can get motorized wrestling on network TV, there seems to be a road worth exploring for big-league dirt racing.

Where it Rated (on a scale of one to six cans with one a stinker and a six-pack an instant classic): We’ll give the Kings Royal four and a half Eldora Toilet Waters. The program avoided the rain and Brent Marks is honestly a surprise storyline. But for as much battling as there was in the top five of the feature field, the battles for the lead were nothing to write home about.

Up Next: Thinkin’ Dirty will return to the late model rank this coming weekend, as the Lucas Oil Late Model Dirt Series contests what may well end up being the final Silver Dollar Nationals as the future of Nebraska’s I-80 Speedway is very much in doubt. The $53,000-to-win finale feature will go off Saturday night, with coverage available on Flo Racing.