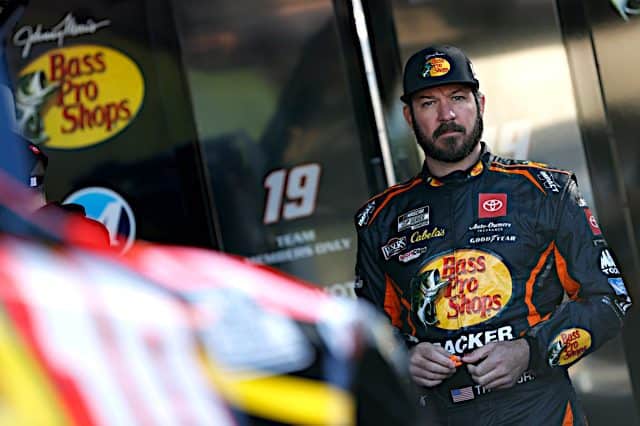 Under normal circumstances, a fourth-place finish at New Hampshire Motor Speedway would be a fine day for Martin Truex, Jr. However, the race ended with Truex in a highly unfamiliar place: the playoff bubble.

Entering Sunday’s race (July 17), Truex was one of three drivers in position to reach the postseason without a win so far in 2022. Among the winless drivers, Truex trailed Ryan Blaney by 71 points but enjoyed a lead of 43 points over Christopher Bell. It’s an odd situation for Truex, whose participation in the playoffs is usually a foregone conclusion by this point in the year.

For most of the afternoon, it looked like Truex was finally in position to break his winless drought. Starting from the pole, the No. 19 Toyota launched into the lead and appeared almost unstoppable early in the race. Truex won both stages with little opposition as no one had a car that could roll through New Hampshire’s flat, sweeping turns better than his. It was clear that beating Truex would require a competitor finding something that the No. 19 did not have.

In the end, that something was fresh tires. During a caution period following Todd Gilliland’s spin on lap 205, Truex and crew chief James Small opted for two tires, hoping to retain good track position for the end of the race. Most of the other drivers who visited pit road took four, which turned out to be a better call.

Although the first two-thirds of the race were punctuated by yellow flags, the final 92 laps to the finish ran caution free. While Truex struggled to move through the pack on older tires, Bell charged into the top five and made the decisive pass for the lead on Chase Elliott with 42 laps to go. Bell went unchallenged the rest of the way, capturing his first win of 2022 and the second of his Cup Series career.

“Obviously, we should have done four (tires), but that’s hindsight,” Truex said after the race. “That’s just Loudon for us. It’s every year we lead a ton of laps, we run really well here, and then we find a way to give it away.

“It’s a tough decision. Being the leader, they’re all going to do the opposite of you. Overall, it was a hell of a run. This place, man it’s killing me.”

Truex isn’t kidding when he talks about races at Loudon slipping away from him. Since 2016, he has led 768 laps at New Hampshire over the course of nine races. All but two of those resulted in top 10s and none of them were wins. Even going back to his days with Michael Waltrip Racing and Dale Earnhardt, Inc., Truex has never earned a victory at this track.

The difference is that this loss at the Magic Mile may have serious implications for Truex’s championship hopes. With Bell taking the win, Truex is now sitting 16th on the playoff grid. He does have a healthy 68-point lead on Kevin Harvick, another veteran who typically has a playoff spot locked up by this time of year. But if somebody other than Blaney earns their first win of the season in the next six races, Truex would be out of the playoffs unless he catches Blaney in points or gets a win of his own.

Truex’s other near-misses at New Hampshire did not hold the same level of influence over his entire season. For example, from 2016-2018, Truex led at least 83 laps in each of the July New Hampshire races. He may have missed out on playoff points in 2017 and 2018, but losing those races did not have any major consequences for the rest of his season.

Even losing New Hampshire’s playoff races didn’t really hurt Truex. In 2016, he won the other two events in the first round of the playoffs; a fifth-place run in 2017 was just a small part of Truex’s title-winning campaign.

Now, this latest disappointment might just keep him out of the postseason altogether. That would be a truly shocking outcome. Back at the beginning of the year, Truex was one of about half-a-dozen drivers who would have been on everybody’s list to make the playoffs.

From his second season with Furniture Row Racing up to the present with Joe Gibbs Racing, Truex is one of those drivers who has shown a mastery of the elimination style format. In seven playoff appearances, he has made the championship race five times! You would think a driver who has done such a great job of navigating the postseason would have no trouble qualifying for it.

Yet with Bell’s win, Truex is the last winless JGR driver of 2022. Missing the playoffs look like a real possibility if victories continue to slip away from the No. 19.

The former Cup champion clearly knows what’s at stake, and he knows what needs to happen going forward.

“Everybody’s like, ‘You’re gonna have to win.’ Well, duh,” Truex joked after the race. “That’s pretty obvious. We’ve had cars to win. We’ve had some really strong cars and everybody at JGR’s working really hard.”

It would not be a surprise to see Truex earn that victory before the playoffs begin. He has a career win at three of the six remaining tracks left in the regular season. On the other hand, the last time Truex went this deep into the season without a victory was 2014. That was his first year with Furniture Row, a miserable 36 races that ended with him shut out of victory lane and the playoffs.

The No. 19 team is obviously stronger than the No. 78 was then, so Truex has what he needs to get the job done. But if he catches a few more bad breaks, he could be on the outside looking in once the playoffs begin. Should that happen, this latest missed opportunity at New Hampshire is going to sting even more.

Barring a disaster, Truex and Blaney will not need wins and make it on POINTS. Short of only allowing only winners to drive for the “title” there is a reason NA$CAR can not take POINTS out of the equation

Truex has become an excellent road racer and with a couple of those left, hopefully he’ll be in good shape.