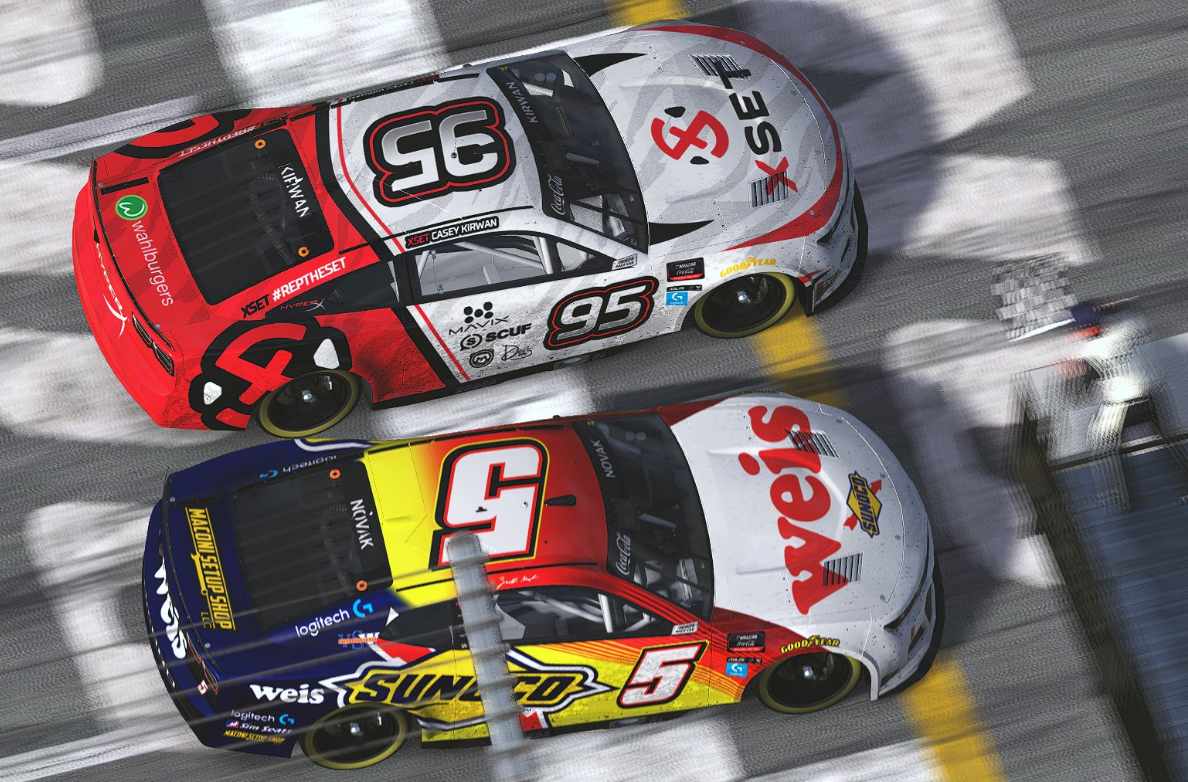 Casey Kirwan, driver of the No. 95 XSET Chevrolet, came into the 12th race of the Coca-Cola iRacing Series season at Pocono Raceway in a precarious position.

Although he was fourth in regular season points, Kirwan was only ninth in the playoff standings because he had yet to win in 2022.

Kirwan changed that in the most dramatic fashion by edging out Zack Novak and his No. 5 Rise eSports/Weis Chevrolet by a bumper in a side-by-side finish at the end of a third and final eNASCAR overtime period to get his first win of 2022. It is the third win of Kirwan’s Coke Series career, as he got one win each in 2019 and 2020.

“I am pretty sure I lost like 30 years of my life after that race,” Kirwan said jokingly in his post-race interview with Evan Posocco and Blake McCandless. “We definitely got the elbows up. I love Zack [Novak], and he is one of the cleanest guys you can race. That was not the person I wanted to use up, but this format awards winning, not consistency.”

For Novak, Pocono is his fourth runner-up finish in the past five races, and it might arguably be his most gut-wrenching second-place finish yet. When discussing the finish post-race, Novak was upset, yet understanding of the situation he and Kirwan were in at the finish.

“I wouldn’t have done it that way, but you got do what you got to do,” Novak said. “He didn’t outright wreck me, but I would not approach it that way.”

Defending series champion Keegan Leahy had a great view of the finish from third place in his No. 45 Virtual Racing School/23XI Racing Toyota.

“I was not going to get to them in Turn 3, so my plan was to give myself the availability to go to the bottom if they wadded themselves up in the wall,” Leahy said of this strategy in the final lap.

The race was calm in its early stages. Polesitter Taylor Hurst took control and opened a gap of about half a second on the rest of the field. Hurst would stay in the top spot for 16 laps until Nick Ottinger made the pass for the lead in his No.25 Logitech/William Byron eSports Chevrolet. From there, Ottinger stayed on point for 12 laps until Kirwan came charging to the front for the first time and passed Ottinger with authority on lap 29.

As the drivers approached the halfway point of the race, green flag pit stops began to cycle through and shake up the field. When Derek Justis became the last driver to pit on lap 37, it was Mitchell deJong who assumed the race lead in his No.23 Logitech/23XI Racing Toyota.

A couple of laps later, the complexion of the race changed again when Liam Brotherton spun out following contact with Ray Alfalla to bring out the first caution. Most of the field used the caution as an opportunity to pit for service, with only four drivers staying out, led by Collin Bowden in the No. 69 eRacr.gg Chevrolet.

On the ensuing restart, business really started to pick up. Bowden hung on for a few laps on old tires before Kirwan got around him on Lap 47. Kirwan’s return to the lead was short-lived, however, as Derek Bourdeau took the top spot on Lap 49 just as the caution came out. The second yellow flag was due to a multi-car accident in Turn 2, with Vicente Salas getting the worst of it.

The race went back green with eight laps to go, and on that same lap, Kirwan made quick work of Bourdeau to reassume the lead. The green flag didn’t stay out for long, as a frontstretch wreck involving Ottinger, Bowden and Steven Wilson brought out the third caution of the race on lap 55.

When the race went back green with two laps left in regulation, Kirwan set sail to a lead of several car lengths over Novak. Kirwan was just a matter of yards from taking the white flag when a massive pileup occurred in the back half of the field off Turn 3. This led to yellow flag number four and set the stage for eNASCAR overtime.

The first overtime period did not make it half a lap before Kollin Kiester spun off the front bumper of Michael Guest at the beginning of the Long Pond Straightaway to bring out the fifth caution flag of the race. Once again, Kirwan would have to fend off Novak and the rest of the pack on an overtime restart.

The second overtime saw the lead change hands, as Novak made a deft pass through Turn 2 of the Tricky Triangle to get by Kirwan. A few seconds later, another mid-pack wreck involving about a dozen cars put the field under a yellow flag condition for a sixth time.

This set the stage for the third and final overtime restart. Novak got a good launch from the restart zone, but Kirwan was able to get side-by-side with him off Turn 3. Novak cleared Kirwan coming to the white flag.

The final time around, Kirwan dove to the bottom again in Turn 3, and this time he and Novak remained side-by-side coming off the corner back to the checkered flag. This set up a door-to-door, bumper-to-bumper finish reminiscent of Ricky Craven and Kurt Busch at Darlington Raceway in 2003, with Kirwan filling the role of Craven and Novak playing the part of Busch.

Solid lap around the virtual @NASCARChicago Street Course today @BubbaWallace & even better job giving all the kids from the Boys & Girls Club of Chicago a day to remember!

I also got my favorite @wendys meal delivered thanks to @doordash! Order a Coke Zero Sugar to be entered to win race and club hospitality tickets, lodging, and flights for 2 to the Coke Zero Sugar 400 at @DAYTONA!

Next Race: On Tuesday, Aug. 2, the eNASCAR Coca-Cola iRacing Series will hold its annual All-Star Race on the virtual Chicago Street Course. The next regular season race will occur on the road course at Watkins Glen International on Tuesday, Aug. 16. Both races will start at 9 p.m. ET, and they will be broadcast live on eNASCAR.com/live, YouTube.com/iRacing and Twitch.tv/iRacing.