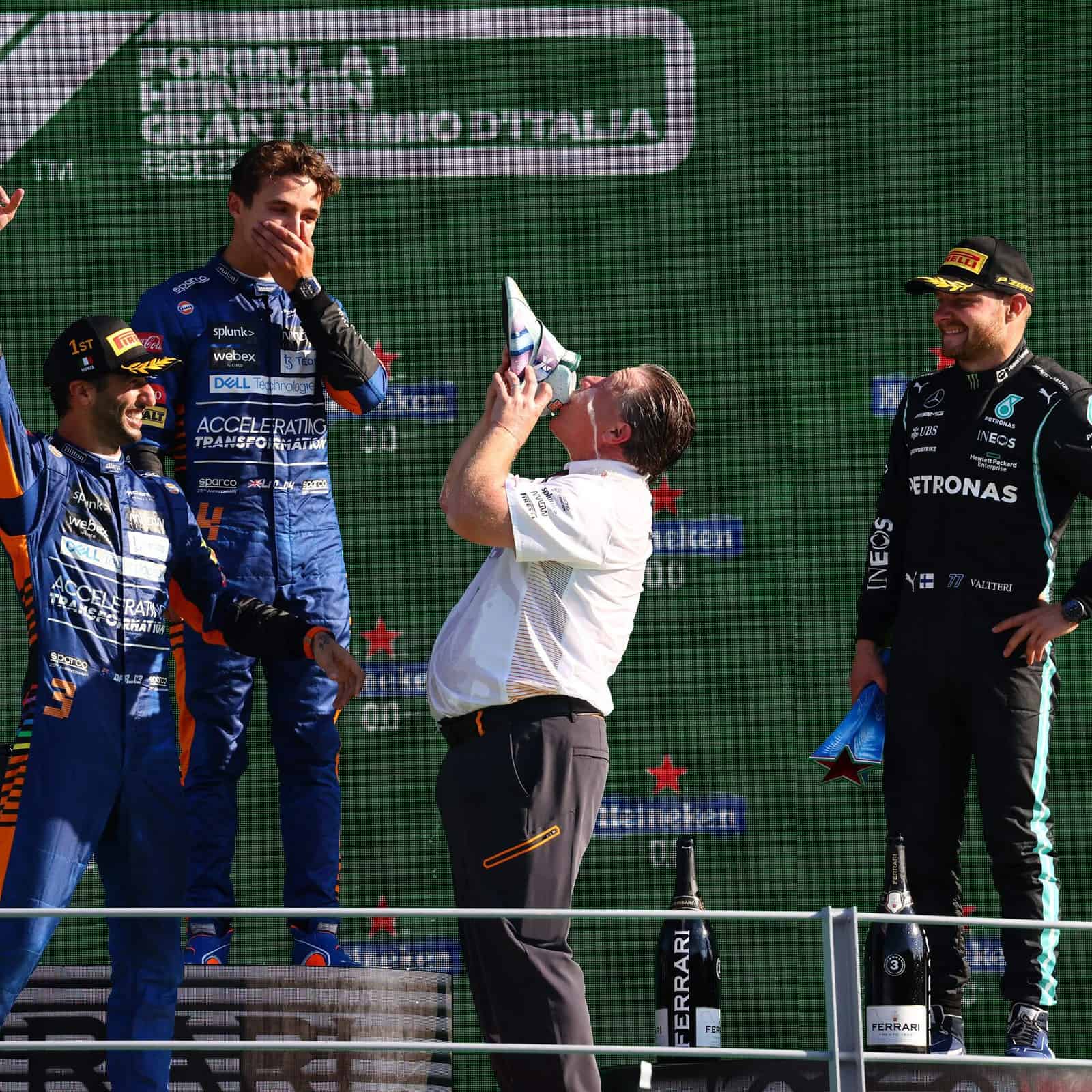 McLaren boss Zak Brown sure has been busy this last month, hasn’t he?

In addition to letting an Andretti Autosport driver test last year’s McLaren Formula One car last week at Portimao, everything that happened on Tuesday night (July 12) happened. This was on top of one of the team’s current F1 drivers having to make a statement detailing that they expect to stay on the team. And there was even yet another rumor that a former WDC may end up driving for Brown in F1 after all, with the reigning F2 champion also in the mix.

This whole situation comes at a time where McLaren is tied for fourth in WCC standings with Alpine, which is not a fantastic position to be in. Fernando Alonso’s horrible luck so far shows that the French team has the definitive edge pace-wise on the papaya orange squad. That’s without mentioning that Alfa Romeo is still within striking distance in spite of even worse luck than Alonso, or Haas making strides to potentially challenge in the midfield.

But why have racing when there’s a carnival going on in the background? I could preview the choices Brown has for next year in a serious matter befitting the average F1 team, but if Brown is going to turn this whole situation into a gameshow by being purposefully vague on what even one of these drivers would do with him, then I’m going to turn this column into a gameshow too.

So sit down, relax. Put some U2 on in the background, and have a glass of wine. Because it’s time to play “The Next Top McLaren F1 Driver!”

As a general note to all of the contestants today: there are no winners and losers. One will join Lando Norris as a McLaren F1 driver, some will go on to the NTT IndyCar Series and one poor sap is going to end up on the McLaren Extreme E team.

Of the options in the running for the McLaren seat, really the only one I don’t buy as a contender is Alex Albon. He probably isn’t going to bring much to the seat the incumbent driver already has, so that rumor just screams to me that Albon’s agent leaked it in order to get a better deal from Williams.

The first driver on this countdown is somebody who already drives for McLaren F1, and one who seems pretty sure that he’ll stay there.

Ricciardo is a multi-time race winner in F1, winning in such classic venues as Monaco and Monza. He has the second-highest floor of anybody else in the running, mainly because two of the other three drivers could very easily pull a Michael Andretti and be back on a plane to America by the summer break next year.

The problem with Ricciardo is that he’s been outscored by Norris by 86 points in a year and a half. Monza win aside, the “Honey Badger” has just not been a good fit for the team.

Surprisingly, after Piastri was linked to a potential ride with Williams, he’s now also a candidate for this seat.

Piastri has a ton of upside as a driver, and although he’s not going to bring along technical secrets from Alpine, he has an idea of how they do things over there. The only big issue with Piastri, ironically considering the next two contestants, is that he wouldn’t be under full McLaren control.

The only reason Piastri is probably going into F1 next year is because Alpine needs him to in order to retain his services. With Alonso turning 41 years old soon, it won’t be too much longer until Piastri will be needed back in France.

Obviously, there’s a big legal battle potentially brewing here between McLaren and Chip Ganassi Racing, and considering the pettiness level between the two teams, it could well draw out for months.

It’s unclear just how Palou would be in F1, but as the reigning IndyCar champion, there are no issues as far as super license points. Personally, basing this on nothing, I think there’s a lot of smoke here but not a lot of fire. I don’t doubt that Palou will test for McLaren F1 this year if he is legally able to, but I also wouldn’t be surprised if that was something Brown agreed to in order to lure the Spaniard over to the IndyCar side of the team.

With Logan Sargeant now a multi-time F2 feature winner, Herta is starting to run out of time to be the first American to enter F1 on a full-time basis in over a decade. And with the Andretti team proposal flailing about now, McLaren may be Herta’s only real chance.

It’s questionable if Herta will have the super license points to get this seat. Supposedly, according to Brown himself, Herta will test enough this year that he’ll have the required mileage to qualify for a super license. Herta and contestant number five are the lone options better than Ricciardo when it comes from a marketing point of view.

Competitively, Herta is the least sure thing of the five here. He could go out there and challenge Norris, or he could dramatically burn out like his boss Michael Andretti did in the early ’90s. There’s really little middle ground.

The headlining choice right here, albeit probably the least likely scenario. While Vettel is not the driver he was even a few years ago, he’s dragged the Aston Martin kicking and screaming to some good point finishes, and he should be able to do better in potential winning equipment.

Vettel brings with him the marketing prestige and legitimacy any former WDC possesses, with an encyclopedic knowledge of the sport. Of all of the drivers on this list, in all honesty, I would choose Vettel.

If he can compete with Norris, good. If not, he brings all the positives Ricciardo does and then some to the team. It just depends on what Vettel actually wants to do here: stay dragging the Aston Martin for at least another year, retire to care for his beehives or take on this huge challenge.

It’s a decision only Vettel knows for sure about, and it’s one Brown should be paying attention to.