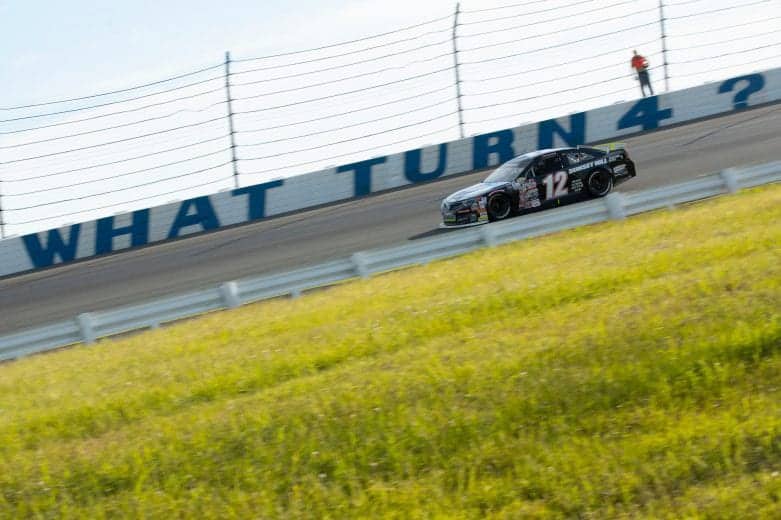 The halfway point of this ARCA season is set to take place at the Tricky Triangle.

Jones has won both his ARCA starts thus far this season. Piloting the No. 81 Toyota, Jones also won the 2020 Truck race at Pocono.

Smith, meanwhile, is the hottest driver in the ARCA field, sitting atop the Frontstretch ARCA power rankings.

Moreover, Smith just won the super late model race, the Redbud 400, at Anderson Speedway. Yes, the two-time ARCA winner Smith will be a contender at Pocono.

Caruth, meanwhile, leads the ARCA points and is attempting to make his third career Xfinity start.

Despite leading the points, Caruth is winless this season. Following the most recent ARCA race at Mid-Ohio Sports Car Course, Caruth called his shot for his first ARCA victory, saying, “Excuse my language, but I’m going to go win that bitch.”

“Couldn’t have asked for a better start of the season,” Caruth added in a team release. “Just have to trust the process and work through the lighter half of the year and find some wins. I enjoy going to new racetracks and doing my homework. It’s been very productive learning each racetrack and getting respective results.”

His teammate, Sanchez, finished fourth in the ARCA race at Pocono last year. Sanchez left Mid-Ohio proud of his Rev Racing team effort at Mid-Ohio despite an 11th-place finish due to a tire penalty.

“I felt that weekend we brought the fastest car in the field, it was a step in the right direction, and we need to bring that same ideology to the rest of the schedule,” he said in a team release.

With three career ARCA victories, Sanchez is hungry for his next one, hopefully at Pocono.

“I think it will be a good day,” he continued. “We have good speed at the tracks where you keep it on the throttle most of the time, which is Pocono’s characteristic.

“You have to make sure your car handles in the long run and try not to lose momentum, and if you’re in traffic, it will be hard to pass.”

Wright led three laps at Mid-Ohio and is making his second ARCA start this season as well as his third overall at Pocono.

“I am excited to return to my friends at Young’s Motorsports for Friday night’s ARCA Menards Series race,” Wright said in a team release. “Without a doubt, the extra track time on Thursday and Friday will help with the bigger picture which is the NASCAR Camping World Truck Series race on Saturday afternoon. I’m hoping we can have a successful race with the No. 02 Big Dog Energy Chevrolet SS.”

Mid-Ohio winner, and two-time ARCA winner this season, Taylor Gray will make his first ARCA start at Pocono. 17-year-old drivers are eligible to compete in the ARCA race there.

“I feel good,” Gray told Frontstretch. “Just getting prepped for the weekend and doing as much preparation work as I can whether it be in the Ford simulator, going through film, looking at notes, looking at onboards [cameras], stuff like that.

Although he only talked to his Truck teammate and brother, Tanner Gray, a little bit, Taylor Gray also met with Zane Smith to prepare for Pocono.

At such a young age, Taylor Gray already has seven ARCA-sanctioned wins. While it has not changed his mindset going to the racetrack, he is more confident in his team and pre-race preparations this year.

“Every time I go to the racetrack, I show up with the mindset of ‘I’m coming here to perform my best and hopefully end up in victory lane at the end of the day,’” Gray said. “I’m all about being competitive and trying to win every race track we go to. Overall, we’ve run better this year than we have in the past. We’ve got a good team around me, we’re all working smooth together, and it’s finally starting to get the ball rolling a little bit on our program like we’ve tried to the past few years. We’ve won two main races and one East race this year, so we started off decent. We’ve just got to keep pushing forward and try to get more wins.

“I am working harder preparation-wise this year than I have the past few years just because I’ve got the right people around me to tell me how to do this, what to do, and stuff like that. I’ve got better people around me this year than I have my whole racing career. It’s all about who you surround yourself with so that’s helped this year in my progress of developing as a race car driver. I’ve gotten more mature over the years.”

But don’t forget about Venturini Motorsports. The team is bringing four Toyotas to Pocono with Parker Chase in No. 15, Jesse Love in No. 20, Toni Breidinger in No. 25 and Jake Finch in No. 55.

“If our drivers are going to succeed at the next level, then they need to beat those drivers and I think they are up for that challenge,” he told Frontstretch.

The team has won two of the last three ARCA races at Pocono.

“It is a great racetrack for us,” Venturini said. “We’ve run well there, and our young drivers will run well. Jesse’s going to have a great day. I think it will fit Parker with his road racing experience.”

Finch is making his main ARCA debut at Pocono. He has made four combined starts in the ARCA Menards Series East and West. He has one top five and four top-10 finishes with a best finish of second place at Fairgrounds Speedway Nashville.

“I think Jake is a good little racecar driver and he’ll go fast,” Venturini said. “He had speed at Dover; it was a little bit of a learning experience for him that day. I expect he will run well once we get there.”

“We just wrecked,” he told Frontstretch. “Being aggressive with the setup and shouldn’t have been. We jumped ahead of ourselves a little bit and we should’ve let the whole weekend come to us. That’s how we’ve approached everything since then. Just letting the weeks come to us rather than trying to get more out of it than we’re capable of.”

Continuing to run full-time this ARCA season, Van Alst will take his short track car to the dirt tracks.

“Daytona and Talladega, it’s all momentum so you’re drafting to get momentum,” Van Alst explained. “There [at Pocono] you’re drafting to make your straightaways faster and to increase your lap times. I feel like there’s more handling involved at Pocono cause you got to lift in three corners. So, you must have a good setup to be fast there. You can get a little extra by drafting but it’s not like Daytona and Talladega.”

The General Tire Delivers 200 will then take place on Friday at 5 p.m. ET with TV coverage provided by FOX Sports 1.