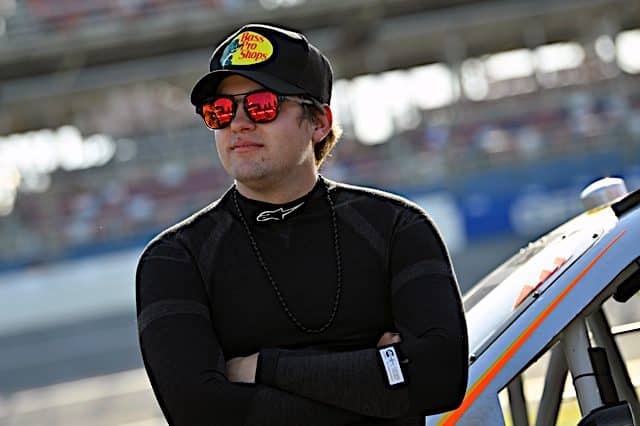 While it is still a mystery where Ty Dillon will call home for the 2023 NASCAR Cup Series season, it is for certain he will not return to his current ride at Petty GMS Motorsports in 2023. Dillon and the organization announced that they have mutually agreed to part ways at the end of the 2022 season.

The speculation as to where Dillon will race is certainly something to discuss, however, what is even more interesting is when you think about who could replace Dillon in the No. 42 Chevrolet in 2023. With his ties to Chevrolet and his success on the track, Xfinity Series regular Noah Gragson appears to be someone many think could be a replacement for Dillon.

Yet others think Gragson is not ready for Cup and there are plenty of other good candidates to choose from to take over Dillon’s ride next season. Our writers Anthony Damcott and Mark Kristl debate whether or not Gragson is the leading candidate to replace Dillon.

When GMS Racing bought a majority stake in Petty GMS Motorsports, the number font and face of the team is still the Petty side of the operation. While some of the sponsors (like Allegiant, the airline company that GMS Racing owner Maurice Gallagher owns), come from GMS Racing.  Therefore, fans associate the team more with Petty than GMS.

This is leading people to forget that GMS Racing is the primary owner and operator of the team, and they have several options to pull from within their organization, and even outside of it, to drive the No. 42 in 2023.

The team’s Camping World Truck Series drivers are probably far from what the Cup team is looking for, as Jack Wood is in the midst of his rookie season (an unfavorable one at that), and Grant Enfinger seems very content with staying in the Truck Series. But these two drivers are options nonetheless.

Then there’s the joint endeavor between GMS Racing and JR Motorsports that was formed in 2019, a driver development program called Drivers Edge Development. Along with Jack Wood and Gragson, the program also has Sam Mayer, and there are several former drivers that, maybe with the right convincing, they could steal from another team to driver the No. 42.

Zane Smith seems like the most likely option in that category, and would be my choice if I had to pick a replacement for Dillon. Smith had been largely rumored to take over the No. 1 for Kurt Busch at Chip Ganassi Racing this year, but we all know how that worked out: Ganassi sold his team to Justin Marks and Trackhouse Racing Team, and Smith was left without a ride before replacing Todd Gilliland and Front Row Motorsports in the Truck Series.

It’s safe to say that Smith got the bad end of the deal and it left him out of the Chevy camp. He might enjoy being with Ford, but an opportunity to essentially return to his old team in the Cup Series might be what he’s looking for, and would serve as justice for not being able to secure the Cup ride this season.

Other possibilities persist too; maybe Richard Childress Racing is so incensed by Tyler Reddick’s move to 23XI Racing that they put Reddick in the No. 42 next season (RCR and Petty GMS have an alliance) before looking for a long-term replacement in the No. 42 for 2024 (such as Mayer, potentially). Maybe the No. 42 runs full-time in 2023 with a rotation of drivers as a form of “audition” for the ride full-time in 2024.

Either way, I don’t think Gragson should be the leading candidate for the ride, despite being a member of Drivers Edge Development. Now that isn’t to say he isn’t Cup ready, because I believe he has the talent to make it to the next level; I just don’t think he’d be a great fit for the No. 42 – he’ll probably want something a little bit more competitive.

He’s made several Cup starts with Kaulig Racing, which leads me to believe he might be heading there next season. But at the same time, I don’t see Dale Earnhardt Jr. letting go of Gragson that easily. With the rumors that JR Motorsports wants to go Cup racing, maybe Gragson’s the guy that the team goes with.

Besides, the focus for Gragson should be on winning the 2022 Xfinity Series championship while trying not to make more enemies on track. His secondary focus should be impressing in his Cup starts with Kaulig Racing and Beard Motorsports. Basically, he should be focusing on performing well this season before he figures out what he does next year. – Anthony Damcott

Outside of winning a NASCAR championship, 24-year-old Gragson is ready to compete full-time in the NASCAR Cup Series.

Gragson has seven career NASCAR Xfinity Series wins, including two this season. Consider this fact though: his seven wins have come at seven different racetracks. He has proven his versatility, winning at short tracks, Darlington Raceway and superspeedways. His wins at those tracks show he can drive anywhere and be a contender in the right equipment.

Gragson is also on pace to post career-bests this year. With eight races to go in the regular season, Gragson is one win away from tying his career-high wins and he already has led his second-highest number of laps. He is improving every year. Statistically, his worst Xfinity racetrack is Kansas Speedway. Yet all four of his starts there have been 10th or better, with two top-15 finishes coupled with two DNFs due to his involvement in crashes.

Yes, in his seven Cup starts, Gragson has not run well with four DNFs. Three of those DNFs came at Daytona International Speedway and Atlanta Motor Speedway, both tracks prone to even the best drivers crashing.

His other DNF came in the Coca-Cola 600 due to a mechanical failure, something out of his control. Add in Gragson running for part-time Beard Motorsports and newcomer Kaulig Racing and his Cup stats are not indicative of his potential in the Cup Series. None of the other drivers have performed too well at Kaulig Racing this year, either.

OK, time to address the elephant in the room: Gragson’s attitude, both on and off the track. I agree Gragson made a horrendous decision to wreck Sage Karam at Road America.

But the Cup drivers self-police that type of driving more so than the Xfinity garage. Karam’s team Alpha Prime Racing does not race alongside Gragson often, and NASCAR did not aptly penalize Gragson. Despite all that, he has a boat load of talent.

The Next Gen car has brought parity to the Cup field. There have been 14 different winners thus far, an unheralded feat in this current playoff format. With Gragson’s Xfinity successes, he could help Petty GMS become a more regular contender next year, too.

If Gragson wrongs someone on-track, either that driver or that driver’s team will surely pay him back at some point.  Denny Hamlin insists that he will pay back Ross Chastain at some point this year, for example. Metaphorically, if Gragson angers a Cup driver, like an old dog vs. a new puppy, he will certainly be put in his place. Based on his current driving style, he would learn that the hard way.

Gragson does not need to fully curtail his driving style, though. Being aggressive in the Cup Series with the competition tighter than ever is a good thing. Chastain has his team owner Justin Marks’ support because of his performance and two victories.

The No. 42 is co-owned by GMS Racing and Richard Petty. When was the last time a fiery driver drove for The King? A fiery youngster driving for The King would bring marketability to the team. There’s no question the team would be talked about more and that’s a good thing.

With Dillon’s departure from Petty GMS Motorsports, who else is a better candidate than Gragson? Brandon Jones seems loyal to Toyota, Smith is tied into Ford, and other candidates appear unavailable. One must think that the organization parted ways with Dillon with a clear vision for the future. That vision ought to include Gragson. – Mark Kristl

Regardless of who winds up in the 42, unless they make major upgrades to their program. It will still be a mid pack team.
It’s a lot more likely for an average car, & team to pull an above average driver down, than the reverse. John Hunter is a good example.
We’re not talking Hendrick here, it may not be who they want. But who they can get.

I wouldn’t hire him. I think he has almost as bad an attitude as Baby Busch. Something in that Vegas water.(Although after a little Spencer pummeling and a little Phoenix PD intervention, Kurt straightened right up!)

I think Gragson deserves a more competitive Cup ride than the 42 can offer.