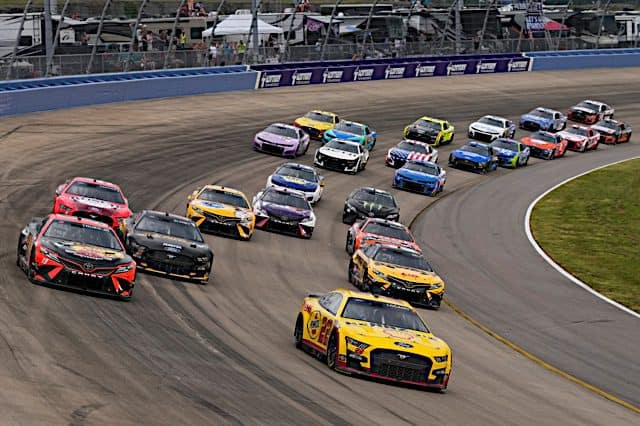 What if there are more than 16 different NASCAR Cup Series winners this season?

We’ve heard that a lot this year. But we heard it a lot last year too, and that was much ado about nothing. So, should we really even spend time thinking about it?

Well, yeah, we should.

Because the Next Gen car has made 2022 anything but predictable, and suddenly with six races left in the regular season, there are 14 winners. Christopher Bell’s win at New Hampshire Motor Speedway last week brings the total of possible playoff berths on points to just two.

And we’re not talking about drivers 15th or 16th in points sweating it out. The drivers sitting just above the cut line are both in the top four in points.

Ryan Blaney and Martin Truex Jr., currently third and fourth in points, respectively, are at the mercy of a still-stacked field of winless drivers if they can’t make it to victory lane themselves.

As it stands, there are a few different possibilities for the playoff field:

No additional winners, or the only new winners are Blaney and Truex. If that happens, the field remains unchanged. Two drivers currently in the top 16 (Kevin Harvick and Aric Almirola) would still miss the cut, because two winners, Chase Briscoe and Denny Hamlin, are currently outside the top 16.

One additional winner who is NOT Blaney or Truex. In that case, only one driver can point his way in. Currently that’s Blaney, with a 37-point cushion.

Exactly two additional winners who are NOT Blaney or Truex. As long as those two drivers are in the top 30 in points, they displace both Blaney and Truex, despite their points standing.

Three or more additional winners. Should this happen, and it could, the driver lowest in points with just one win would still sit out. Right now, that would be Briscoe, but that could change if a new winner is lower in points (which would be anyone except Blaney, Truex, Harvick or Almirola). Hamlin is safe, despite being lower in points than Briscoe, because he has two wins. There’s no chance of enough multiple race winners to boot Hamlin.

Blaney (or Truex) leads the points after Daytona International Speedway without a win but with two additional winners. Blaney’s a not-insurmountable 78 points behind Chase Elliott. Should he hit a very hot streak and still not win, he’d make the playoffs without a victory as the regular season champion. That means the driver lowest in points with just one win would go home empty-handed.

Including Blaney and Truex, there are currently a whopping 13 drivers with at least one Cup win who have not won this year. (If you’re keeping score, they’re Blaney, Truex, Harvick, Almirola, Erik Jones, Austin Dillon, Michael McDowell, Justin Haley, Bubba Wallace, Chris Buescher, Ricky Stenhouse Jr., Cole Custer and Brad Keselowski.) All of them are inside the top 30 and so playoff eligible with a victory if there are spaces for them.

Also if you’re keeping score, three of those drivers are former Cup champions; they won’t go down quietly.

And just in case you’re ready to write any of them off, look at where some of those wins are coming from.

Let that sink in: All but Custer and Wallace have won at at least one of the remaining tracks. Wallace has won at Talladega and finished second in this year’s Daytona 500. So, it’s not only not farfetched that there could be three more winners, it wouldn’t be a massive upset for them to do so.

But does making the playoffs really matter?

Well, yeah, it matters because playoff teams earn a bigger chunk of the point fund, but in the context of the sport as a whole, not so much.

Because while there are plenty of drivers who have proven capable of winning races, that doesn’t mean that all, or even most, of them are championship caliber drivers in any given year.

Not only that, but the ones who truly are have no guarantee of even making it to the championship race (just ask Harvick about how that all works out).

But all the scenarios are exciting. They’re not, however exciting because of the title. The title, after all of this, is a one-race show that the best drivers may or may not even be in.

The scenarios are exciting because they highlight the unpredictability of the 2022 season. The Next Gen car has thrown a wrench in the works for a lot of drivers. A team can have a great car one week and feel like they’ve got something, only to find at the next track they’re completely out to lunch. We’ve seen five new winners, two of them from an organization that’s enjoying major success.

This season has all the pieces of a great, memorable year for NASCAR.

And with as much talk about how many different winners we might have before the playoffs, there’s also the possibility of adding to the tally, maybe significantly, during the final 10 races.

The playoffs’ relevance has been called into question since the system started in 2004 and again when it was revamped to the current format. The question of whether playoff titles are equal to season-long ones is absolutely a valid question (and that’s terrible for the drivers who’ve won them, because they didn’t do anything wrong by playing the game that was presented to them).

But this season, with all its parity and unpredictability when it comes to individual races, presents a new paradox. The parity and unpredictability have actually produced a tight enough points battle among the top five (who have also had the most consistent season overall) that watering that down with more drivers and the points reset might actually make the title run less interesting.

On the other hand, it’s hard to deny that all the scenarios for who might get in are also interesting and is putting all the different winners in the spotlight for longer than they might otherwise enjoy.

But the fact remains that they’re not all really championship-worthy this year. The playoff system is meant to put an emphasis on winning, but it’s possible that the eventual champion won’t win a race in the playoffs because the field is full of potential race winners. Squeezing through on points won’t be an easy task; unless someone reels off a ton of stage wins between now and then, no driver has enough playoff points to really secure advancement.

So, then, while the playoff implications make the different winners more exciting, the playoffs themselves risk being diluted further by the parity in the field. That puts NASCAR in a difficult position: The racing is good enough that the playoffs aren’t really going to make it better, but it’s also giving the system the best hype its seen in years.

If we get a champion who also racked up a ton of points and multiple wins, it’ll quell the questions of legitimacy, but raise more about why the system is needed in the first place.

If we get a champion who had a win or two in the regular season, but was also inconsistent and far behind the point leaders before the reset (oh, hi, Denny Hamlin), the legitimacy questions rear right back up.

A season long championship, gives you a deserving champion.

The current crap shoot, gives you a champion who rolls a 7

No one needs the playoffs. Period.

When are all the teams on the field for the Super Bowl?

I totally agree the playoffs are crap. It was a bonehead attempt to be like the stick and ball sports, which we all agree is apples to oranges for NASCAR. A little tweaking of the weekly points distrabution was all the fun (something to argue about) true NASCAR fans really needed.

I could see the current Chase being converted to a dash-for-cash type thing that would add a little interest for those fans who’s drivers were out of the running for the points. But the season long winner is unique to racing (at all tracks and classificatons) and should never have been abandoned!

Once this is fixed, can we talk about ‘stage racing’? :)

Last edited 23 days ago by The Spotters Stand
0
0