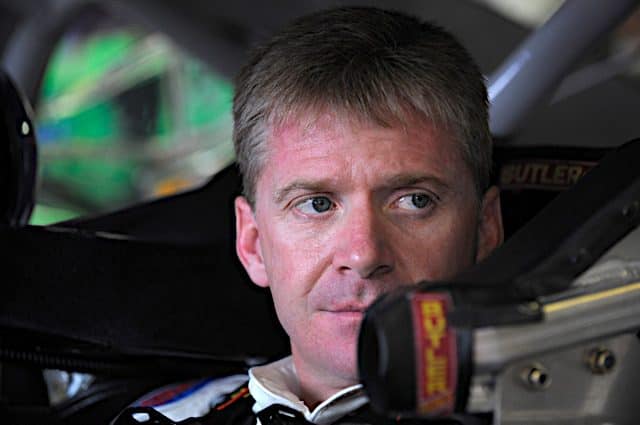 If you don’t like math, he led a lot of laps, and he didn’t win.

Truex has led a lot of laps in the NASCAR Cup Series at New Hampshire Motor Speedway, but Sunday’s effort marks the most he’s ever led in a single race. It does not, however, represent the highest percentage of a race Truex has led at Loudon.

That’s because he once wired the field.

For the why-the-heck-are-you-throwing-math-at-me crowd (who are my kind of people, frankly), Truex led the first lap, he led the last lap, and he led every other lap in between.

And he’s not the only driver to boast that feat at New Hampshire — in the same season.

But we’ll talk about Truex first because we’re already talking about Truex and let’s just go with that.

In July 2000, Truex, who had just turned 20 years old a few days prior, was in the midst of his rookie season in what’s now ARCA Menards Series East (which was then a much deeper, more competitive series with a 19-race schedule).

In the first eight races of the year, Truex posted a third place at Seekonk and had four finishes of 32rd or worse (yes, the series had that many cars then).

Then the series moved to New Hampshire for the second time that year. Loudon was one of a couple of tracks where the series ran in conjunction with the NASCAR national series, so it was always a big one for the teams. In 2000, the Xfinity Series race was a standalone in May, so the East Series ran with them as well. Truex had finished 29th in that effort.

Truex’s team was owned by his father, Martin, who had had success as a racer himself. Sponsored by SeaWatch, his family’s company, Truex was the epitome of the family team driver. Most of the series was driver or family-owned teams at the time.

It was a safe bet that more of the fans in attendance knew who Martin Truex Sr. was than his namesake. But that would change soon enough.

Martin Jr. won the first pole of his fledgling career, and when he strapped in for the 100-lap race, he was determined to make the most of it.

Truex never relinquished the lead, taking the 44-car field to task. Incidentally, another nine cars failed to qualify. The field was healthy and had plenty of talent. Two-time defending champion Brad Leighton finished in the top 10, as did future champ Andy Santerre. Also in the field was Paul Wolfe, current crew chief for Joey Logano in the Cup Series. He finished 40th with ignition problems.

But Truex Jr. was clearly the class of that field. Including the green-white-checkered finish, he led 101 laps, which (hey, math nerds) accounts for 101% of the scheduled distance. The margin of victory was .2 seconds over Kelly Moore.

Truex’s pasting of the field was bottom-of-the-barrel news for the weekend. It came just one day after the practice accident that claimed the life of Cup driver Kenny Irwin Jr. and at the same track.

And if that wasn’t tragic enough, the spring Xfinity race had also had a pall over it after the death of Adam Petty in a practice crash eerily similar to Irwin’s

It was that pair of tragedies that set up the second wire-to-wire Loudon win.

The problems actually began before the May Xfinity race at New Hampshire, when Kenny Wallace slammed the wall at Martinsville Speedway after the throttle on his Chevrolet hung wide open. Wallace was OK, perhaps because it was Martinsville and not a bigger, faster track, but the hung throttle was a concern behind the scenes.

When the same issue took two lives in turn 3 at Loudon, it made NASCAR and the fans understandably gun shy. Cars were outfitted with kill switches to shut the engine off in an emergency. The problem seemed isolated to the GM entries, Chevrolets and Pontiacs. There was talk after Irwin’s death of cancelling the fall race at Loudon, but the economic stakes were high and cancellation was a last-resort option, even after eventual season champion Bobby Labonte suffered a hung throttle at Darlington Raceway (which, thankfully, didn’t result in a crash).

By then, it was too late to move the race and too much on the line to cancel. So NASCAR mandated restrictor plates on the flat 1-mile track.

The plates were a stopgap, meant to slow the cars so that if a throttle issue happened, the impact would be at a reduced speed. The Cup cars were still faster than the Xfinity cars that had produced a similar fatality, but NASCAR felt they had to do something.

As it turned out, the plates made the most aero-dependent car ever look like they could pass with ease.

The restrictor plates simply didn’t allow enough power to complete a pass on Loudon’s flat surface. With no banking to give a car momentum, passing was at a premium. Four of the top five finishers started the day in the top five.

The race featured enough caution periods that green-flag pit stops never cycled Burton out of the lead, and when Sterling Marlin spun with just two laps to go, Burton cruised home under caution with no chance of a last-minute bid from runner-up Labonte, even if he had been in position to attempt a pass. The Cup Series hadn’t yet instituted green-white-checker or overtime finishes, so the race ended with barely a whimper.

There was no giant victory lobster back then, and the circumstances of Burton’s win didn’t warrant much celebration from anyone but Burton.

Though it’s become a footnote to other, more somber events at New Hampshire in 2000, two drivers pulled off perfect days that year. One was a rookie with his first-ever win, the other a young veteran with a knack for finding Loudon’s victory lane.

Wiring the field is no small feat. Fans at both races saw something, even if they didn’t know it at the time.

The Spotters Stand
Reply to  Bill B

While yes the racing was snore inducing, can you really blame NASCAR for making the decision they did? They were likely afraid of another driver passing away on a national stage that at that time was HUGE for the sport. Sadly of course, that happened with Dale at Daytona the next year, but it was a knee jerk reaction and one that(possibly)could’ve saved a driver or two’s lives.

The Spotters Stand
Reply to  Bill B

Like the article stated, everyone just lived through the Adam Petty and Kenny Irwin tragedy ( can’t remember when Jerry Nadeau fit in to this) but I don’t blame Nascar for going the route they did. It was boring but my heart was still hurting.