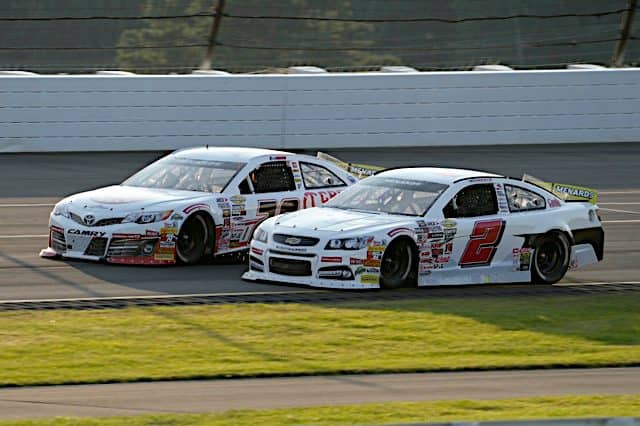 It’s been a good week for Nick Sanchez. On Wednesday (July 20), the 21-year-old was announced to compete in four NASCAR Xfinity Series races this season for Big Machine Racing, a team that earned its first win this year. On Friday (July 22) at Pocono Raceway, Sanchez finished second after leading 13 laps in the ARCA Menards Series race.

Sanchez posted the fastest lap in the pre-race practice session on Thursday. After the ARCA starting lineup was set via the practice speed times, Sanchez started fifth ahead of his second start at the Tricky Triangle.

Sanchez took the lead on lap 27 and led the field to the first competition caution. Although Taylor Gray led a race-high 38 laps, Sanchez ran second behind Gray in the latter half of the race.

However, due to multiple cautions as darkness felt on the 2.5-mile track, series officials decided to end the race on lap 64, 16 laps shy of its originally scheduled distance.

“Right there, we just pitted,” Sanchez told FOX Sports 1 post-race. “Kind of covered ourselves on tires and restarted fourth. Got to second, just kind of ran out of laps. I don’t know what lap we ended on, lap 60 or 65, but I think if it would’ve gone the distance, our car would’ve come in and we would’ve gotten him. But that’s one of those races. Good points day, clean car, and I think this is the first time I’ve had the fastest car on an oval so that’s promising as a team.”

Caruth meanwhile called his shot for his first ARCA victory after the previous ARCA race at Mid-Ohio Sports Car Course. However, he finished fourth at Pocono, tying him for the most top fives and top 10s this ARCA season.

“Our Max Siegel Chevy was the fastest thing on the racetrack,” Caruth said post-race. “We had to come down a second time to put fuel in it. I don’t understand how every other car can do it except for us. Something every week. We’ll go to IRP and do really good there.”

Like many ARCA competitors, neither Sanchez nor Caruth have competed at Lucas Oil Indianapolis Raceway Park. Make no mistake though, these two, along with Daniel Dye, seem destined to fight for the championship throughout the second half of this ARCA season.