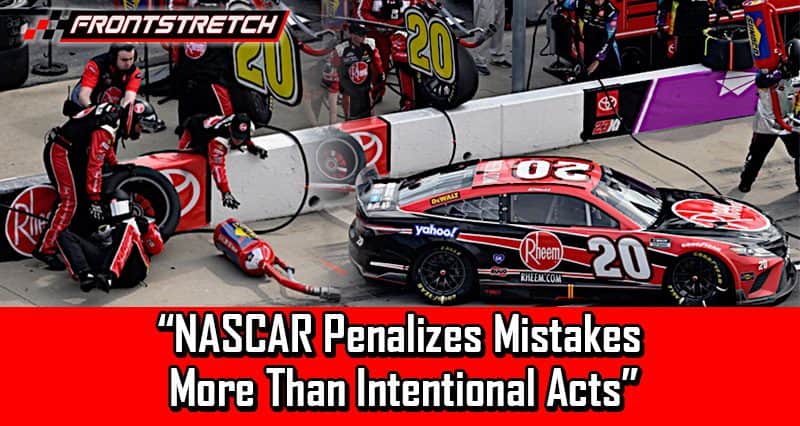 In a similar matter, Christopher Bell was not penalized for his loose wheel at Atlanta Motor Speedway. Bell had crew chief Adam Stevens on top of the pit box for Bell’s win at New Hampshire the very next week.

Loose lug nuts turning into loose wheels have been a significant issue this season, as several teams, including those of Kyle Larson, Denny Hamlin and Chris Buescher, have had team members suspended for four weeks.

Frontstretch‘s Jared Haas talks about how similar Bell’s and Cindric’s loose wheels were and how NASCAR should penalize loose wheels in the Cup Series going forward on the Frontstretch YouTube page.

Let me explain. NASCAR is an entertainment venue only. Race included. Having been around since 1963 in person, they dictate certain things.
Anyone remember Chase Elliot’s bumper cover flapping in the breeze at Charlotte? The officials ignored it. Some lame explanation. Here is what it did, there was a stage break coming so they could keep him on the lead lap OR if it fell off, gosh, a caution and he could complete the repair.
They have a great charade now with the “inspection process.” Really, someone ought to sue them over a gambling (now legal) loss because of penalizing a driver when it benefits Chase, Kyle Larson, or Jr. Motorsports.
Discovery would be interesting. Put them under oath. I would pay to hear that.
I may have been recruited by some folks I went to grad school with to sit in on some NASCAR presentations at some Fortune 50 companies. That crowd is a joke. This next TV contract should be interesting as the sport is not commanding much money now. And the “management” is weak at best. What major corporation would hire Steve Phelps, Steve O’Donnell, Ben Kennedy or Jim France to run it? Yep.

I don’t know of a person or organization in the world that doesn’t find a way for exceptions to be made when money is involved. This is not difficult. Is the wheel on or off? Off – is the car outside the pit box? Yes=Penalty.