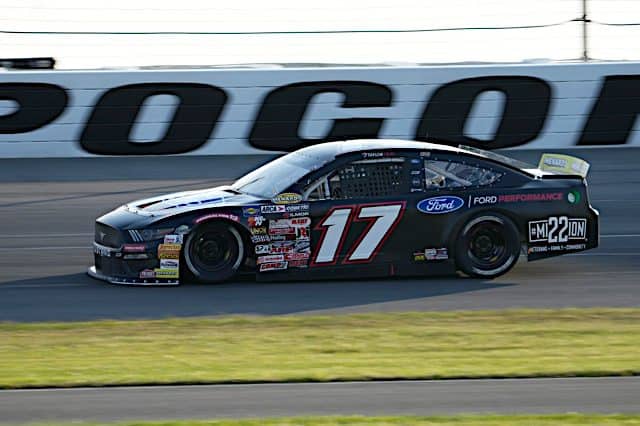 Only eight points separated the top three in ARCA points coming into Pocono Raceway for the General Tire Delivers 200. Rajah Caruth, Nick Sanchez and Daniel Dye were all looking to get some separation between them, but Taylor Gray won in a race that was shortened 16 laps due to darkness. This was Gray’s third win of the season in a part-time schedule and he did it after nearly going a lap down at one point.

“Definitely wasn’t easy, definitely not as smooth as you would’ve wanted it to go,” Gray’s crew chief Chad Johnston told FOX Sports 1 post-race. “We’ve had speed since we got here. First time here for Taylor, I’ve been here a few times so we’ve been able to win every place that I’ve been to before so this keeps that streak alive. We’ll take them any way we can get them. Try and build momentum to go to IRP. I’m pretty excited about going there. We’ll enjoy this while we can and go to work on Monday.

“Being able to stay out there at the end knowing that no light was coming. We were in a better position on fuel. It was kind of a risk on tires, but tires didn’t really fall off a lot for us. We had to get track position back and I don’t think we could’ve passed 10 cars in that amount of time. We just needed to stay out and hope for the best.”

Gray said in his post-race interview, “Props to Chad Johnson for making a good call, we lost a lap taking fuel and then came down to get more fuel and stayed out when everyone else pitted; I’m pretty speechless right now, when we were a lap down I didn’t think we’d end up here, there’s no quit in us at DGR.”

Sanchez made some moves after the last restart but could not get around Gray before the final caution and settled for second place. NASCAR Xfinity Series driver Brandon Jones made his third start in ARCA for the 2022 season and finished third while Caruth and Dye finished fourth and fifth respectively. Connor Mosack and Jake Finch finished in sixth and seventh with Kris Wright in eighth place. Jason Kitzmiller finished in ninth and Toni Breidinger 10th.

Pocono is called the Tricky Triangle for a reason, drivers who race here have taken some notoriously massive hits and some drivers took some today. Around lap 21 Zachary Tinkle had his big hit after thinking he was clear, making contact that saw his No. 06 take a right turn into the wall.

Pocono saw the Big One as well with Ed Pompa, Amber Balcaen, Sean Corr and Andy Jankowiak all being involved. This occurred with 30 laps to go and brought out a red flag.

Some drivers such as Balcaen expressed their grievances on social media

Definitely had help… very frusterating when someone else ends your day. 👎🏼 https://t.co/zfc9AMu5n8

Every driver after each wreck walked away.

ARCA heads to Indiana for the Reese’s 200 at Lucas Oil Indianapolis Raceway Park on July 29. The 200-lap event starts at 6 p.m. with coverage on FS1 and MRN.