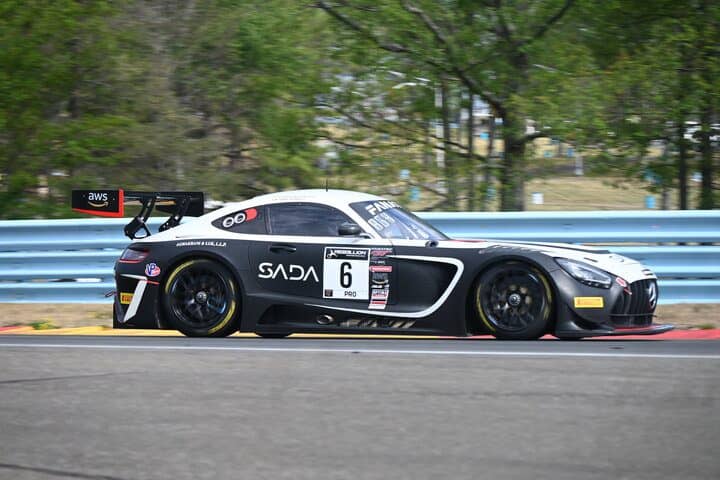 WATKINS GLEN, N.Y. – K-PAX Racing’s Michele Beretta and US RaceTronics’ Loris Spinelli won the pole positions Saturday morning (July 23) for each of the Fanatec GT World Challenge America Powered by AWS races that will be held at Watkins Glen International. Spinelli’s lap at 118.908 mph is the fastest lap of the weekend.

The first session was shortened from the scheduled 15 minutes to 11.5 seconds. This is due to a crash for Zelus Motorsports’ Jeff Burton. Burton twitched under braking for turn 9, then his Lamborghini Huracan GT3 Evo slid straight into the tire wall, significantly damaging the car and putting fluid down on the track. It will be a thrash to get the car fixed for the first race of the weekend.

Prior to the crash, Winward Racing’s Russell Ward was very quick in his Mercedes, but Beretta was fastest in his Lamborghini at 116.627 mph to win the pole for Race No. 1. He was .227 seconds faster than Ward. US RaceTronics’ Steven Aghakhani will start third, then Crowdstrike Racing with Riley Motorsports’ George Kurtz and Turner Motorsport’s Michael Dinan.

The second session saw Spinelli continue his strong form from practice on Friday to set a lap at 118.908 mph to win the pole for Sunday’s Race No. 2. Spinelli’s lap was nearly two-thirds of a second faster than K-PAX Racing’s Jordan Pepper. Winward Racing’s Philip Ellis starts third, then Triarsi Competizione’s Ryan Dalziel in the best of the Ferrari. Crowdstrike Racing with Riley Motorsports’ Colin Braun will start fifth.

In Pro-Am, Dalziel’s lap at 118.020 mph won him the Pro-Am pole in fourth overall. He was .224 seconds faster than Braun. Wright Motorsports’ Jan Heylen starts third in his Porsche, then Racers Edge Motorsports’ Mario Farnbacher and DXDT Racing’s Bryan Sellers. In the Am class, Triarsi Competizione’s Charlie Scardina will start from pole in 12th overall.

Race No. 1 for Fanatec GT World Challenge America Powered by AWS is scheduled for 2:15 p.m. ET Saturday afternoon. The race will be streamed live at the GT World YouTube channel.