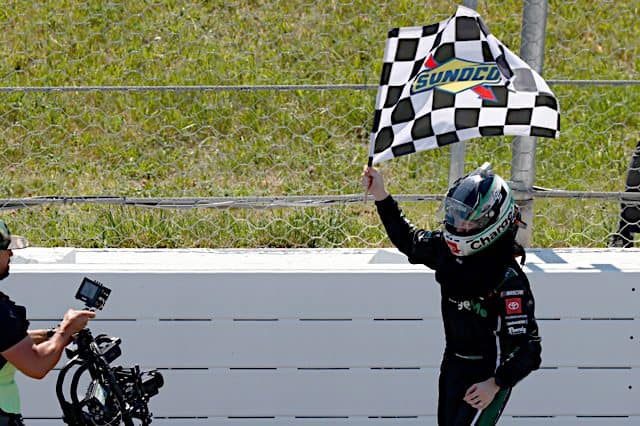 Smith held off Ryan Preece in the closing laps to claim his second victory of the season.

“We’ve been going through a little bit of a struggle here recently but just when we needed to shine, we start shining,” Smith told FOX Sports after the race. “Can’t thank KBM, this Charge Me Toyota Tundra was fast today, it was really good. It was a little tight, had problems getting through the gears. Sorry to the (No.) 51 team, but also thank you to the (No.) 51 team, this one is just as much as mine as it is yours.”

He also added how much this win helps going into the playoffs next week.

“Big, because we didn’t have a lot of playoff points going into the playoffs and today we got one stage win, won the race so I think we’re going to be looking pretty sharp going to IRP [Lucas Oil Indianapolis Raceway Park].”

Kraus just missed out on making the playoffs and commented on what else he needed to be above the cutline.

”Clean up a couple of things, like I lost Vegas [Las Vegas Motor Speedway] or Texas [Motor Speedway] when we got taken out. A couple of races we could have improved on when we were better, but overall it’s what happened. Today, I don’t know what happened, power steering went away, just parts failure. Just move on, hang our heads high and we’ll go on to the next 10 races.”

Cautions plagued the first part of the race, starting with three in stage one. Two cautions were for minor spins, but the last one was much bigger and ended some drivers’ days. On lap 12, Todd Bodine was in the middle of three-wide racing when Hailie Deegan made slight contact with his right front. He spun and crashed into the outside wall, while Tyler Hill and Jack Wood crashed behind him. Wood then slid into Bodine.

With Todd Bodine out of the race, Zane Smith has clinched the regular-season NASCAR Truck Series title. https://t.co/IiSe8wZTOx pic.twitter.com/qjBp0zrLVF

The damage was too much for Bodine to continue on, and his 800th national series start ended in heartbreak.

Stage one ended under caution, with Chandler Smith claiming the victory and Zane Smith, who had throttle issues for much of the race, clinching the regular season title.

After the race got back underway, things were much calmer in stage two. Pit strategies varied, with Chandler Smith coming down pit road shortly before the end of the stage. But Eckes, who ran second to Smith, stayed out and earned the stage two win.

However, when the race restarted, Chandler Smith was able to get out into the lead and defended the position to win his fourth career race at Pocono.

Electrical problem for Hailie Deagan. Short circuit between the headrest and the steering wheel