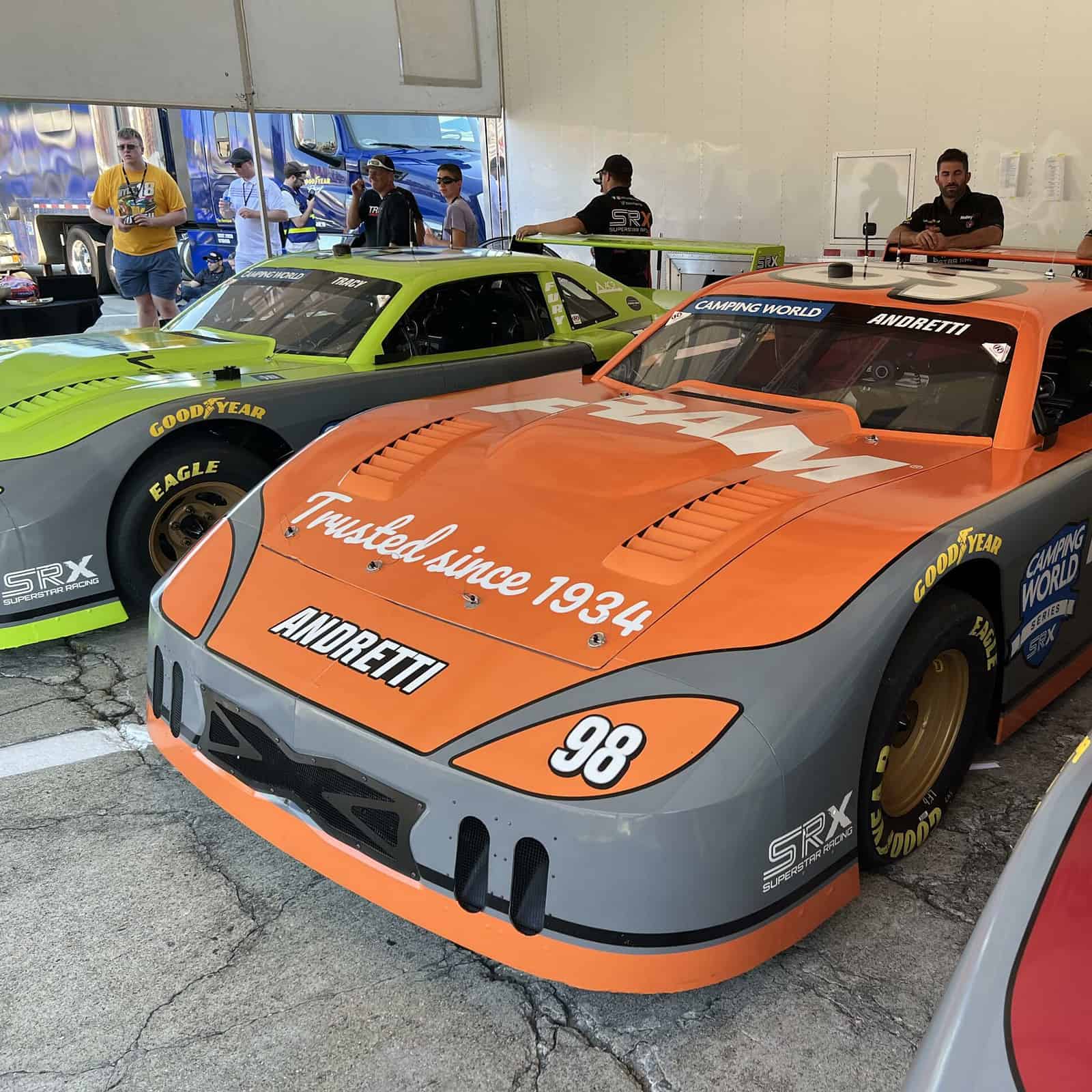 While Chase Elliott enjoyed a second win in his second career Camping World SRX Series start on Saturday (July 23), Marco Andretti held on to become an unlikely second champion in the SRX series.

The race, a dirt event at Sharon Speedway, was billed as a battle of the Blaneys, as Ryan Blaney made the trek over to the family racetrack to battle father Dave Blaney. A very early wreck in the first heat circumvented Ryan’s chances in the heat races due to damage, but he still beat his father by finishing seventh in the feature to Dave’s 12th.

Midway through the time-shortened feature, Andretti drove into points rival Ryan Newman on a lap 32 and sent Newman and himself spinning. As Elliott and Tony Stewart battled for the lead, Andretti and Newman battled for the championship near the back of the pack. Dave Blaney tangled with Ryan Hunter-Reay in the closing laps, sending Hunter-Reay into both Andretti and Newman behind.

Although Newman seemed to take the worst of the vehicle damage, Andretti revealed following the race that he broke his wrist in the accident. Andretti was able to continue on in the race, and finished ninth to Newman’s eighth, which was just good enough to win the title on a two-point squeaker over the “Rocketman.”

“The cool thing about [this series] is that if you can get damage, you can still play and stay on the lead lap,” Andretti told CBS Sports’ Wiley T. Ribbs following the race. “I broke my wrist in that last little thing, I got my thumb caught in the wheel.

“That was a painful last couple of laps, but I just wanted to cover and finish right where I needed to finish. We were able to do that, this [car] was pretty robust out there tonight.”

Elliott and Stewart exchanged the lead multiple times during the final nine green flag laps, but Elliott got by the three-time NASCAR Cup Series champion with five laps to go and held on for the win.

Matt Kenseth finished third and Hunter-Reay finished fourth. Bobby Labonte came into the feature with an outside chance of winning the championship, but he couldn’t accomplish it and finished in fifth. Greg Biffle rounded out the first half of the field in fifth.

Paul Tracy overcame multiple wrecks to end up 10th on the night, and Tony Kanaan, after taking heavy damage in the first heat after hitting Ryan Blaney head-on, finished 11th in the feature.

A major wreck in the early laps took out Ryan Blaney and Kenseth for this heat and the second heat. Kanaan, Tracy and Elliott were also involved.

Newman took the lead early and won the heat, holding off Waltrip and Andretti. There was a late caution for Biffle spinning near the back of the pack, and there was an extra restart after the original one was waved off.

This race turned into a duel between the master (Dave Blaney) and the young champion (Elliott), with Blaney riding the top and everybody else hunting on the bottom. After the last restart for a Hunter-Reay and Tracy wreck, the top line lost speed and Blaney couldn’t hold off Elliott any longer. Blaney would jump the cushion on the last lap and hit the wall before finishing fifth, as Elliott drove away from Blaney to the heat win.

I am seeing a TON of chatter about a scoring error for Marco giving him 3 extra points. Any comment or reporting on this?